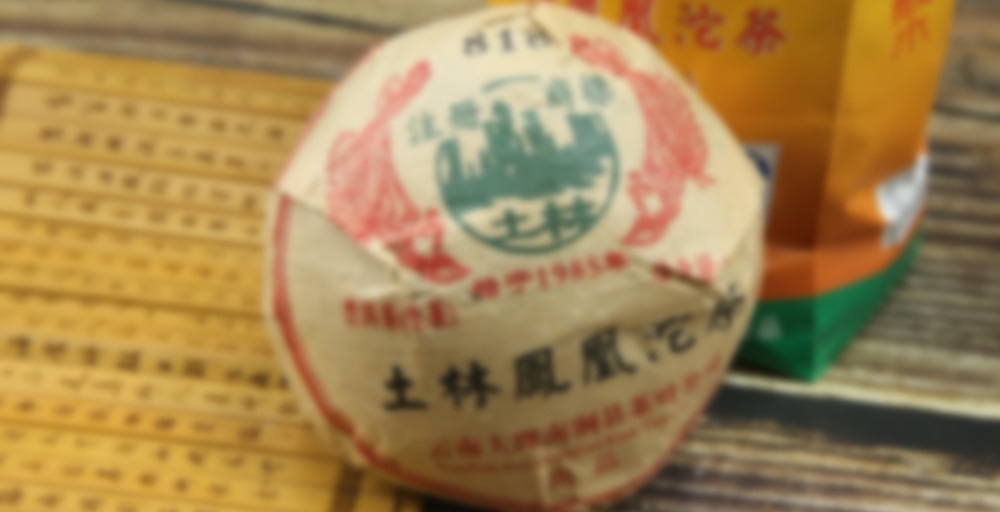 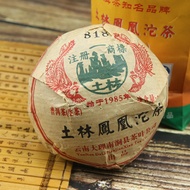 This is an interesting tea. I got a pack of 5 tuo as I wanted to experiment with some of the Nanjian Tu Lin stuff..

They seemed quite dry stored but the tea is dark in colour and heavily compressed. I seem unable to get full leaves off it – so lots of mainly broken leaf. Too easy to make lots of tea dust.

I’ve tried this in several pots over the past few days. Today I’m going with 4g in a 90ml Zhuni Bian pot that I have and boiling spring water.

The star attraction here is the mouthfeel. it’s very thick-bodied, but also very ‘smooth’ and there is apparently no flavour spike.

The smell from the lid gives sharp zesty notes of freshly sliced lemon-rind, but then a fruity almost ‘cherry coke’ or morello waft and some sort of jammy ‘tartness’ reminiscent of prunes. Maybe a camphorous ‘zing’ on the high note. There’s a distinct ‘wine must’ or fermented fruit on leaves after the first wash.

As brews go on, the smell on the leaf drifts toward the more ‘pine-woody’ territory.

Sticky foam residue on the interior, so lots of oil.

Tastewise, the first few steeps are mildly bitter but also creamy which wasn’t expected. Mild vanilla notes. Thick and sticky and a bit of spice at the back of the throat.

The following few steeps just get a hint more of astringency, but there’s no flavour boom that you get with some sheng as it opens up. It remains ‘creamy’ and develops into a barely detectable sweetness in my cheeks.

This is interesting tea for a great price. It doesn’t pack any kind of wallop and has turned well, rounding into a very creamy and thick souped tuo. So maybe it’s a bit one-dimensional in the way that it’s mainly about mouthfeel and not really about taste.

I’m going to experiment with a higher leaf ratio and a gaiwan, but I suspect it’ll just make later steeps sour. I’ll also try steaming this apart to see if I can get more ‘full leaf’ out of it… not sure it’ll work though.

4-star tea! I’d heartily recommend it, especially if you’re down with that slightly slimy/oily thick mouthfeel. I know there are some that dislike it.