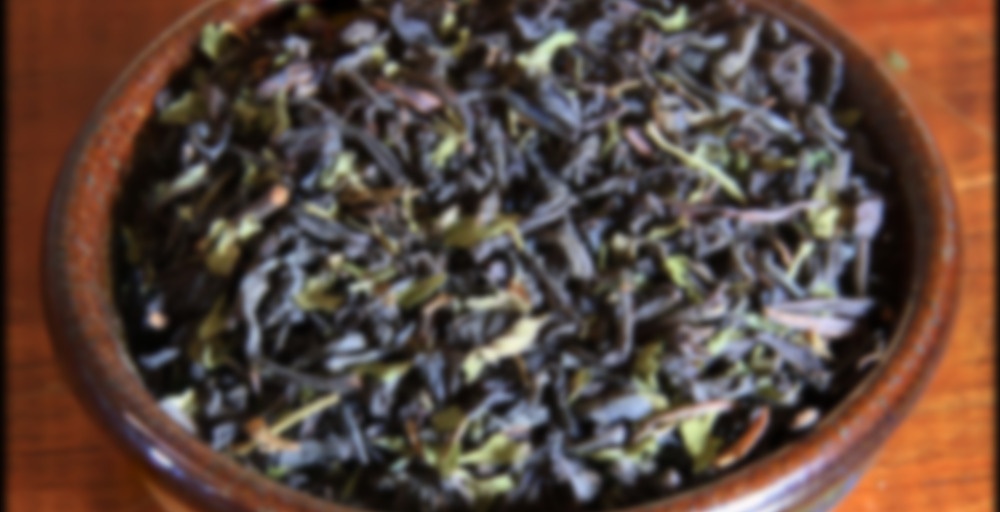 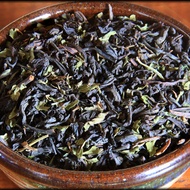 The Inspiration
Cherokee healers would use mint tea to lower blood pressure and aid digestion. This invigorating blend mixes the perfect amount of peppermint with pine-smoked lapsang souchong black tea to bring you through the Cherokee village, surrounded by campfires and ancient healing traditions. Cherokee Mint is smooth, minty, and smoky and is best enjoyed without milk or sweetener. It also takes very well to three or more infusions.

How to brew the perfect cup:
Steep 1/2 tablespoon of leaves
in 8 ounces of boiling water
for 5 minutes.

Even though it’s not cold I’ve felt chilled all night. I’m not sure if it’s the weather, ( it’s rainy and dreary here, and it looks like it’s going to stick around for a few days) or if I’m getting sick. Either way this tea is comforting. It’s silky smooth with the mint offering a brightness followed by a bit of richness and depth in the smokey note.

Hope you don’t get sick, stay warm and drink lots of hot tea :-)

Brenden sent me a sample of this with my order and also suggested it to prevent me getting sick.
I did not realize it was made with lapsang souchong until I had already steeped it for 4 1/2 minutes, oops. So this will be interesting because I am still not feeling like lapsang and I can be friends.

I do like the name of this. The most interesting part of the drive through the North Georgia mountains is this seemingly random pile of rocks where two highways meet. It’s the grave of Trahlyta, who drank from a nearby spring to maintain her beauty. She rejected a warrior’s courtship, so he kidnapped her and took her away to the west. She missed her home in the mountains so much, and he refused to let her go, and she ended up dying while still imprisoned by him.

But, she had asked to be buried back home, and today her grave still exists in this crossroads area. You leave a stone for good fortune, as she wanted to make people’s wishes come true, so they could be happy as she once was. The rocks are well over 5 feet high.

They’ve tried to move it a couple of times for road construction, but both times someone has died. There is a historical marker there now and everything.

Every time I want to stop and leave a stone but every time I have no idea where exactly I can park to be able to do so but it is intriguing enough to always drive by it.

As for this tea, now that I finally have the bravery to try it, I can handle this..kind of. The mint makes it a lot easier but it still has the aftertaste of what definitely tastes of leather and cigars. But, the mint makes it pretty drinkable! And its’ nice and soothing.

Love the story. You’ll have to practice your pitching hand maybe the next time you drive that way ;)

:) I’ll remember to not add free lapsang samples to your orders ;)

I drank it though! It’s just still a weird weird taste to me.

I don’t want to try throwing a rock, what if I mess up and she kills me too! Ahhhhh. She has the best opportunity too up the road…cyclists on a mountain covered with blind switchback turns.

And hey, at least you got some peppermint chai to fall back on! hehehe

Wrap it in a nice note.

I’ve left a stone there! A friend took me there at three in the morning after I had been crying on her shoulder all night (breaking up is hard to do). Placed a stone, made a wish, and said a prayer. I remember feeling silly, but much better after I did it.

Smells delightfully smoky, like a campfire. The first taste when inhaling is smoke, but then the refreshing mint comes through. The mint cools the heat of the smoke and makes the tea lighter. It also brings a nice level of sweetness and takes the deep edge off the smokiness. I’m really liking this tea, thanks kimquat for the sample!