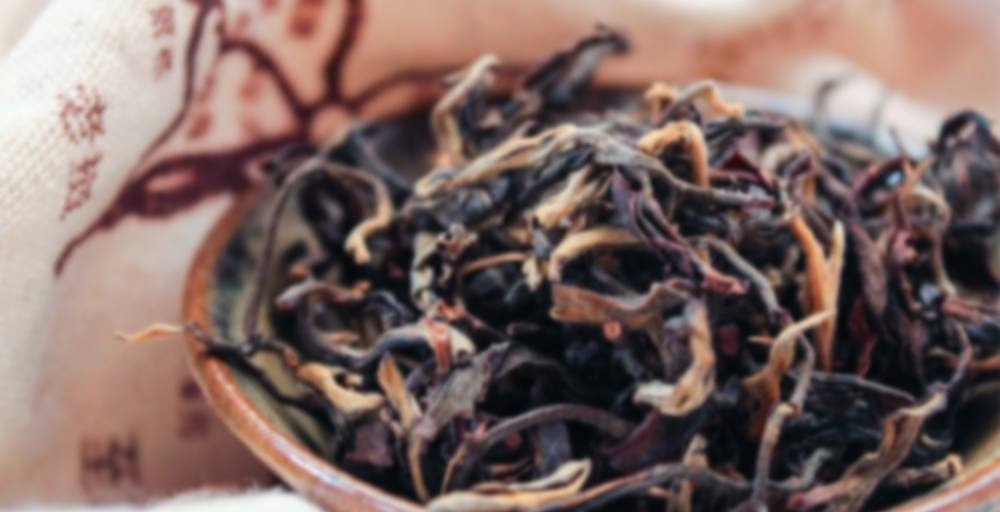 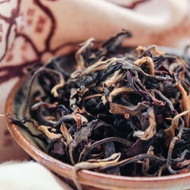 by Verdant Tea
71
You

Master Han is collaborating with co-founding member Master Zhou of the Zhenyuan Dongsa farmers cooperative to bring us this wild-picked black tea. Master Zhou wild forages from trees between three hundred and five hundred years old to bring us this rare and striking black tea. Every edition we try is an incredible and powerful reflection of the unique terroir of Qianjiazhai, and a testament to how fine and evocative Yunnan black tea can be. Master Zhou recently started making black tea from his maocha, and calls the tea nu’er hong, or “Daughter’s Black Tea” to mark his only daughter’s marriage last year.

This unique black tea is closer to a sheng pu’er in its perfumed florals, crisp vegetal aftertaste and bright body. Yet, it is definitively a black tea in its cream and chocolate notes. A tea like this challenges the hold fast lines between categories and in doing so, challenges our palates with new pairings.

As this tea steeps out, it becomes a true textural experience combining the woody forest flavor of wild Yunnan with the rocky mineral flavor of the Ailao mountains of QIanjiazhai. Herbaceous notes come through as a nod to the medicinal herbs growing around the wild tea trees in Qianjiazhai.

WHAT WAS PICKED:
Young leaves and buds from 300yr – 500yr old wild trees

This tea has a malty aroma with an earthy, leathery flavor that reminds me of a ripened pu-erh. It is a little astringent and lacks depth. It isn’t something I would drink again.

This tea has a very robust and rasping mouth feel. It was very two dimensional and reminded me very of your typical CTC Assam. If not for the honeysuckle and orchid in the aftertaste I would’ve thought it was a full leaf second flush Assam.

I brewed this gong fu style. My first brewing was 10 seconds +5 seconds for each additional brewing. I did a total of 10 but it flat lined after the second brewing.

This tea has many of the characteristics of sheng pu’erh without the bitterness (it is a black tea after all). Dried apricots and complexity from the wild growing environment. Relatively complex and nice layering of flavor. Not the most impressive black out there, but a great value at $20 USD / 100g.

Before I start this review, allow me to state that I did not brew this tea gongfu style and I probably should have. I tried a couple different brewing methods for this one. The first was a modified three step infusion that I tend to use on a lot of Chinese, Indian, and Sri Lankan teas. The second was a traditional one step Western infusion. I am really not certain that either of the methods I used did this tea justice.

The first infusion yielded a pale golden liquor with an earthy, woody, and slightly floral nose. In the mouth, I detected delicate notes of moss, wood, and grass with underlying herbal notes of tulsi and mint. The second infusion yielded a dark golden liquor with an even earthier, woodier nose that also yielded impressions of chocolate, honey, and toast. In the mouth, delicate, yet heavier notes of wood, moss, and grass were rounded out by flavors of chocolate, honey, toast, and malt. The third and final infusion yielded a dark golden liquor with a pronounced malty, toasty character on the nose that was underscored by impressions of wood. Notes of malt, earth, and wood were noticeable on the palate. These flavors were underscored by subtle impressions of chocolate and toast.

As for the one step extended Western infusion, the liquor produced was a dark golden amber. The nose showed aromas of malt, honey, toast, grass, chocolate, herbs, and wood. In the mouth, I detected woody, honeyed, and malty notes underscored by herbal, grassy, and somewhat chocolaty flavors.

Overall, I was not exactly blown away by this tea, but as I stated earlier, my brewing methods may not have done it justice. Still, I am not certain I will revisit this one. The overall impression I am left with is of a subtle, smooth, soft, and clean tea lacking in the rustic characteristics I typically expect from wild picked teas. For me, it is not that there is not enough going on flavorwise with this tea- it is that there is not enough going on at once to hold my interest. Honestly, I found this to be kind of a boring tea. I may try it again when I am equipped to brew it gongfu style, but then again, I may not. We’ll just have to see about that.

This was a wonderful black tea. Overall it was very mellow, mild, and smooth.

I steeped this near boiling, around 200 degrees, in my gaiwan with 5g of tea. The first infusion brought forth a light orange liquor with a light black tea taste and hints of chocolate. It is almost sweet with no astringency. The aroma is sweet and fruity, almost like cherries.

The second and third infusions darkened the liquor to a golden orange color. Still light for black tea, but very beautiful. The taste was smooth and creamy, with increasing notes of chocolate and a slight astringency reminiscent of a Golden Monkey. The flavor becomes much more well balanced with equal notes of savoriness and sweetness.

I didn’t have much time to sit down for this sipdown, so I tried this Western style. I got about 3 solid pots out of this, but the flavor died down after the third session. I think that this’d be good to have/brew Gongfu style, but considering I don’t have the tools (YET) for Gongfu style, I have to do what I can with what I have….

Anyway, this was good. Out of the 4/5 teas I had with the Verdant Tea sampler, this was my least favorite. It has potential to be great, but the overall flavor was light and didn’t last as long as the others.

Having just had a very excellent (Texas sourced) orange blossom honey mead over Christmas, I can actually get my head to Verdant’s note on this tea having orange blossom honey characteristics. It isn’t the sugar sweetness, obviously, but more that almost musky, floral tang that lighter, sweeter honey’s have.

Tulsi is “holy basil” and I think if you’re going to call this tea “vegetal” you probably can’t go any greener than that. It isn’t at all “vegetal” in the sense that a dragon well or Japanese green tea is. There’s no big bass notes of chard or kombu here. No, this tea is like a giggling child on a Summer’s picnic. Sandals forgotten, sun dress smudged and too often askew, but having far too much fun to care about such details. Light and bouncing.

I still get the “someday I’ll grow up and be an old sheng” thing, which really is a ton of fun. Tasting what tea will become someday feels like a super power or something.

Verdant says cedar, I’d have gone with sandalwood, myself.

Having had Laoshan black (the chocolate tea) yesterday I’m not getting their chocolate note here, but perhaps next time.

I need to try this one gonfu style. I was lazy today and just brewed it up western and the result is something, not very exciting. It’s not a bad cup of tea.. but it’s boring or maybe it has unrealised potential lol. not fair of my to rate this until i’ve had a chance to drink this the way i think it probably ought to be. :)

I only pull Master Han’s black out (that’s what this is, right?) when I have time for gongfu. It is at it’s best that way.

This tea is picked by Master Zhou. Zhenyuan Dongsa Farmers’ Cooperative is comprised of Master Zhou and Master Han.

Good to know. I assumed it was the same as Master Han’s Wild picked black, just renamed, since he’s part of that cooperative.

look at you all knowing stuff charoma. haha i tried to find that info but couldn’t. :)

Hahaha, at least I’m good for something. :P

@charoma – better than being a good for nothing :) lol

First note! I can’t believe no one has written about this tea before. Does that mean I’m the only one to have purchased it so far? I highly recommend you trot on over to Verdant’s new website and check out this tea’s story. There’s a very interesting video about how they cultivate the wild tea trees and how they prefer to process the tea by hand and lay it out to dry in the sun because it creates a better flavor.

I used my gaiwan to brew this gongfu style. I started with a 6 second steep and added 3 seconds to each subsequent infusion. Towards the end I lost count and ended up steeping this for a couple minutes. The early infusions have a light yellow liquor that deepens with each subsequent steep into a dark golden amber.

This may be a Yunnan Black, but it tastes like Puer to me. The primary note is aged leather, which is definitely a puer flavor note in my experience. There’s a minor underlying note of spice in the later infusions, which I’m really enjoying. It’s a dark woodsy tea. The description says it’s farmed in the oldest tea forest in the world and I feel like you can taste that in the tea. It has a strong presence and evokes the kind of reverence owed to a wise elder.

I can’t say I understand or agree with Verdant’s other flavor notes on this one though. It’s described as “very vegetal” akin to “tulsi” and “floral” like “orange blossom honey.” I’ve never had tulsi so I don’t know what that tastes like. But I have had plenty of vegetal teas and I wouldn’t use that word to describe this. Similarly, I have had lots of floral teas and I wouldn’t necessarily use that word to describe this either. There is something honey-esque in the cup but nothing overtly flowery. I’m interested to find out what others detect in this tea. Get some and see for yourself! For me, I will enjoy this sample but won’t be buying more. It’s not a flavor profile that I particularly desire.

Glad I’m not the only one who gets sheng pu-erh from this tea!