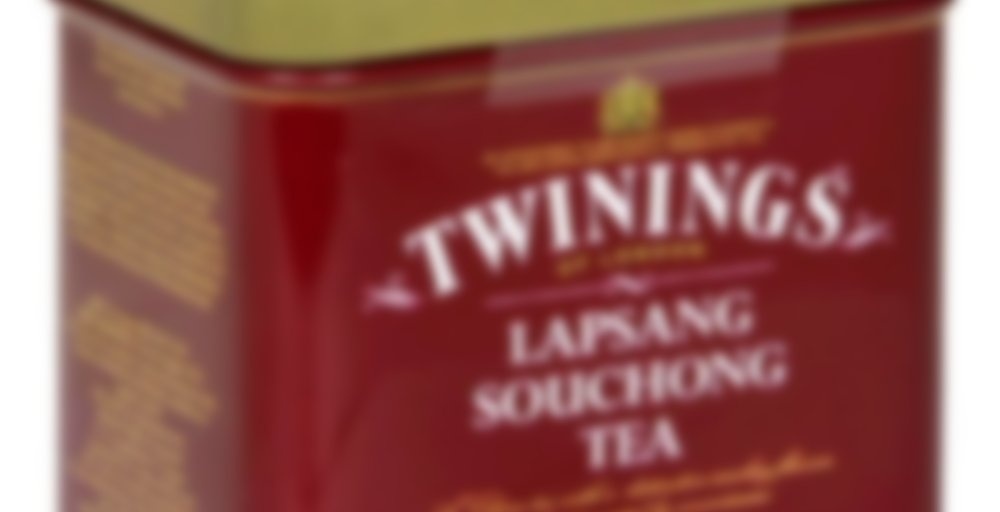 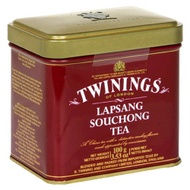 A strong, golden tea with a very distinctive smoked character.

Nothing to see here, move along, move along. Nothing new. But this, while not being anything extraordinary, just really is my cup of tea, I just keep reaching for it. When flavoured teas (even grey mixes) are just not IT, when black tea is just too morning-like, when green tea seems too sharp and oolong too weedy-herbalish, there is lapsang souchong. And the Twinings one is oh so reliable at that punch of smoke. Thank you, that was just what i needed.

(to like this it might help if one likes smokey whiskey. And vice-versa of course. It most certainly will NOT be everybody´s cup of tea, even if it is mine)

Twinings Lapsang Souchong is one of the first teas I ever became addicted to, way back in my university days. I always had a tin at hand, and could be assured that no one else would steal it from studio because I think they all were scared of the smokey aroma. I was shocked to see that Twinings moved their factory to Poland, after 300+ years in the UK, and as of last month they also have stopped exporting tins of this loose tea to the USA. Such a shame. They quit selling their Russian Caravan tea here a decade ago… another lightly smoky tea that was always pleasing!

Oh, I had a pack of russian caravan once, some of the first tea I ever bought. Though bought at the same time, my one true love (now deceased but always mourned) was their rose pouchiog, which was just oh so so lovely.

And yay about the love of the smoky tea. We are the 1% in that.

You guys are such prolific writers (and tea drinkers) I’m having trouble keeping up!

Anyway, I keep hearing about Lapsang Souchong but have never tried it myself, so when I saw a box of these teabags at the supermarket, I had to get it! I wonder, though, if I should be creating a new entry for the teabag version instead of adding this note under the loose leaf one …

To sidetrack a bit, teabags are such convenient little packets for lazy bums like me. I’ve got some loose leaf Maloom and Okayti sitting around untouched for a whole week but I tore straight into my new Lapsang Souchong purchase instead, because all I had to do was throw a teabag into a cup of hot water. It’s less troublesome than yanno, actually brewing tea. xD

So my first impressions are: wow, this is very smoky indeed! I’m drinking it plain at the moment and I think it tastes rather earthy, like Pu’er, only slightly sharper/more acidic(?). Also, is it just me, or does this tea dry your throat up? The smokiness isn’t for everyone, but I like it even though it made me sneeze and gives me smoky breath. LOL. ♥

Yes, it does have a certain throat drying quality, but I find it sweet that it made you sneeze. :D

Also, I agree with the comparison to Pu-erh. It is of course not even remotely the same thing, but in terms of unique flavours pu-ehrs would be the closest thing. The (then) owner of my little local shop and I decided to agree on this a few months ago when I was craving lapsang souchong and it was sold out (and she wasn’t stocking up at the time due to imminent sale of the shop), so we agreed that the closest alternative she could give me would be the plain generic pu-ehr. Pu-ehr doesn’t have the smokeyness, but underneath that I think lapsang souchong definitely has the same dark sort of solid flavour.

There are worse things to be addicted to. ;D

LOL, it’s probably the smoke drying up your throat, and I suppose it’s my excessive sniffing of the tea that made me sneeze. Guess I was too excited by this smoky novelty. ;)

Yup, I was referring to that complex earthy/dirt-like taste you find lurking beneath Lapsang Souchong’s smokiness and Pu’er was the only thing I could think of describing it with. Otherwise, they’re definitely two different teas. I used to drink Pu’er after lunch at work everyday but I don’t think I can do so with this!

There is no middle ground: either you love lapsang or you hate it. I fall into the latter category, unfortunately. Too bad; I hate not liking any variety of tea.

Yeah, I think that tends to happen with pungent foods, but it’s always possible to acquire a taste for it later on. ;)

As a longtime fan of Lapsang Souchong, I know that people either love it or hate it. For those who’ve never had it before and are interested in trying it, Twinings provides a budget-friendly Lapsang that showcases its essential flavours — the distinctive smoky scent and the earthy taste (like a single-malt whiskey). A suitable introduction to this unique tea.

even better then that, if you order from Harney’s or Upton’s you can get a sample of anything for less then $2

Very true. Though it should be said that the Twinings blends are usually available in most grocery stores, which makes it a bit easier for many people to pick up a box of tea bags or looseleaf on a whim.

Smoky and astringent. I felt my sinuses opening just smelling the stuff after I’d brewed it. I may have to try it again to give a full opinion, but this was one of the few times where I’ve almost completely hated something on first smell. Hot liniments, Vicks VapoRub, and sickness. Eeee.

This might be the first time someone has smelled a Lapsang Souchong and gone, “Who in the hell is smoking meat in my nose?!”

Lapsang Souchong has an incredibly calming and intricate taste. Its strong, robust character reflects against its deep, relaxing smokiness. Twining’s decent Lapsang Souchong calls for a shorter steeping time than most Lapsang souchong because Twining’s tea can occasionally be somewhat bitter. Either way it’s without a doubt worth drinking. A rolling boil adds to the smokiness of the tea.

Been forever, past year was a tad crazy…
I tried the bagged version of this at a coffee and tea shop for free coffee/tea day. I didn’t really examine the package, but noted it’s by Twinings, and as soon as I opened it up, the smokey smell hit me. Wasn’t expecting that.
So I don’t know what I think of it. The black tea itself is decent. It’s quite potently smokey, even in its aftertaste. I’m not sure I want to taste anything smoked after the fact—makes me think I ate some kind of smoked meat. Will I drink it again? I don’t know. Most likely I’ll stick to Earl Grey, chai, and my other usual favorites.
I am planning on converting to loose leaf teas, but I need to finish up all my bagged teas, and I need to find my infusers!

This was my first time drinking Lapsang Souchong. I saw a box a the supermarket so had to pick it up. I didn’t know what to expect so the smokey flavor threw me for awhile. Half a box later and I’m a huge fan. I like to pull this out in the fall when it starts cooling off, it definitely isn’t one I’d drink every day, but it never fails to remind me of the way my house smelled when I was a kid [we had a wood stove in the kitchen that heated the house].

My first try of this kind of tea, they say you either hate it or love it. I love it. The smoky flavor mellows when you brew it. It stays with you after you drink it, the aroma sticking around in you nose. Very smooth finish, which from what I’ve read makes a difference in these teas. If you smoke cigars, you will probably love this tea.

When I first tasted it, I have to admit, I quite hated it. But today I’ve decided, a year later, to give this tea another chance, even because I hated the idea of a tea resting unused in my cupboard.
I read on the internet that I could be mixed with an Earl Grey, in a 50:50 ratio, to have a milder and more floral taste. Well, I brewed it this way, added sugar and milk, and it was excellent!
So, for those of you who tried it and didn’t like the strong taste, give it another go with a touch of Earl Grey, because, let’s admit it, who doesn’t like a nice cup of Earl Grey?