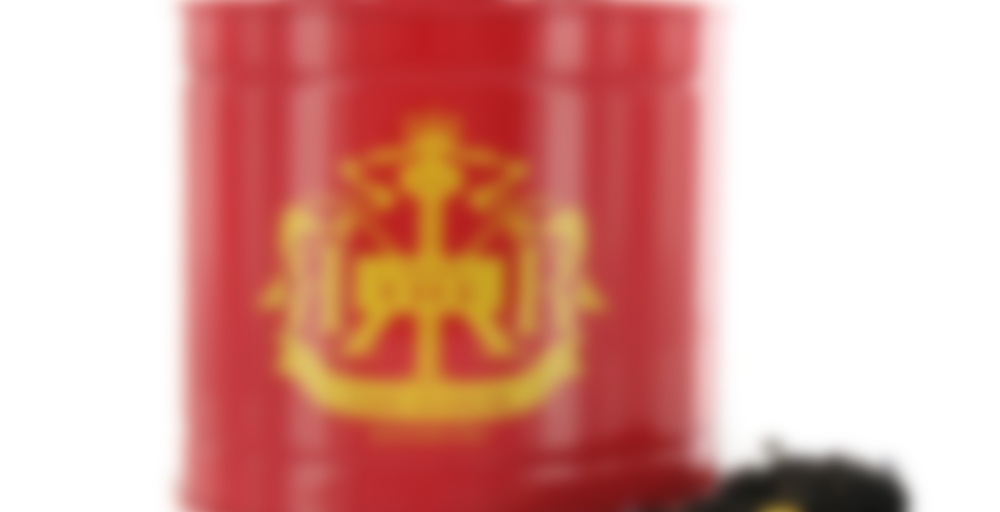 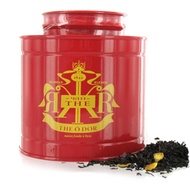 The month of October is historical. Did you know that in October 1928, the secret recipe of the Russian Taste was revealed. More complex than this traditional blend, October Révélation is composed of seven citrus fruits, when traditionally it is composed of three. Bergamot, sweet lemon, sweet orange, mandarin, lime, clementine and grapefruit.

How many citrus fruits can you name? This tea is flavored with damn near every one I can come up with. Which is both fascinating and somewhat intimidating. It seems like it could be really delicious or a total fail. I’m going into this not knowing what to expect.

Right off the bat it gets points for cornflowers, with their adorable blueness among the dark leaves. There is also some citrus peel visible. The fragrance is strongly citrus, pretty heavy on the grapefruit to my nose. Though I’m also getting some of the orangey, tangeriney aspect. There’s a bitterness to it, which I suppose is from the peel.

From the color of the liquor and the aroma, I’m guessing the base here is Ceylon. It has a pretty russet color, and a mild fragrance. There is some definite citrus in the aroma; again I’m getting mostly grapefruit and some orange input. I’m a little worried going into the tasting that the citrus is going to be bitter, as it has that same bitter twinge to it that the dry leaves have.

But fortunately, there’s no bitterness to the taste. It turns out that the citrus is much mellower in taste than in smell. It’s actually almost too mellow for my taste. It doesn’t really make its presence known much at all until the finish, where I get some lemon, and maybe a little of the grapefruit and orange. The rest of the citrus blends together into a sort of single citrusy mish-mash. It’s tasty though. I don’t get a lot of bergamot, so if you’re not a bergamot fan you don’t need to be scared by this one.

I like French teas in general quite a bit, and I haven’t had anything from The O Dor so far that was an outright failure. This one is pleasant, but it doesn’t make me talk to myself under my breath as I’m drinking it. I’m not saying “wow” or “that’s good,” or “mmmm” or such things. By that standard I think it’s something I’ll enjoy drinking but isn’t going to be high on my list to replace when it is gone.

I misread the name of the tea as “October Revolution” (which totally made sense with the red tin, too!) and I was like, what in the world could THAT taste like?!?! then I’m reading “fruit” and am saying “fruit?!” then I re-read (re-red? har) the title and said “Oh…”

LOL. I thought that too at first. The pattern on the tin for some reason led me to assume there was hammer and sickle imagery on it, which didn’t help. I looked at it more closely and it appears I totally projected that image onto the tin without it being there!

Nice tea…I keep the brewing time under 2 minutes which allows me to get 4 tasty brews out of one portion of leafs.

Grapefruit isn’t my thing. When I saw it in the ingredients I almost traded it for another this morning, but decided to steep it anyways. It’s actually an alright cup! There is a mix of citrus and I can’t pick out the grapefruit. The tea base adds a nice depth to it that counters the high notes of the citrus, balancing it out nicely. I don’t think I’d buy this, but if I came across it as an option for a single cup while out, I wouldn’t turn it down either.

This is a tea with character! It is very citrusy as it contains all the common citrus fruits you can name. The dry leaves smell strongly of orange rinds, which reminds me of the sun-dried tangerine peels prepared by my Grandma when I was small.

The brewed tea has a fairly light body with orange and grapefruit flavours. Refreshing but sadly I am not really a fan of citrus fruits, so I can’t say I love this tea. Would be a nice after-dinner tea to most people I suppose.