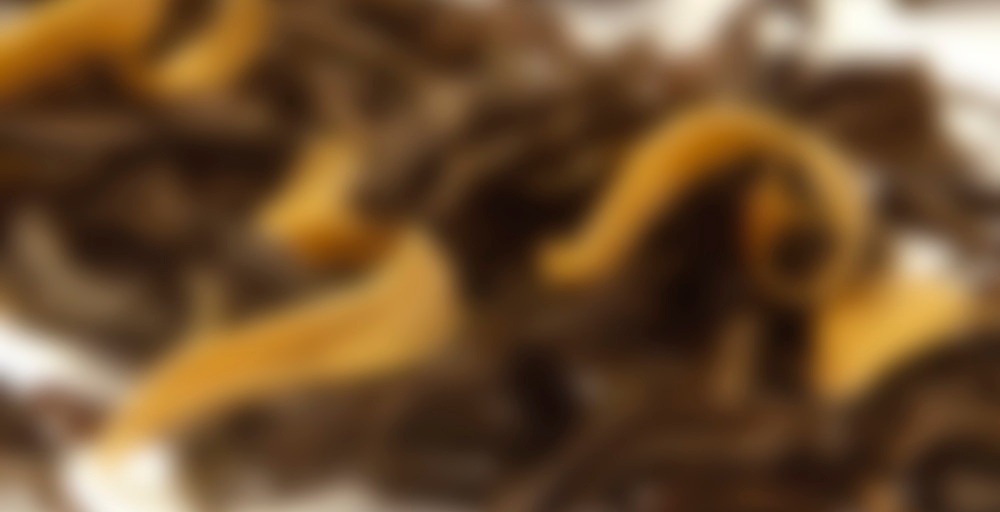 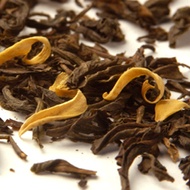 This medium bodied Chinese oolong has the sweet essence of orange, perfect served hot or iced.

Yesterday as I went to my dentist appointment in the afternoon, the thermometer in the car said the temperature was 80 degrees! With this temperature to inspire me, I’m going to start trying a lot of my teas iced. I cold brewed this one all day in the fridge, and it was really good! I was able to get a second glass of tea from the same leaves as well. It was very mellow when cold brewed. You could tell the orange was there, but it was almost subliminal.

I will probably be preparing this tea again as a cold-brewed iced tea.

I’m having trouble deciding what I think about this tea. I’m thinkin’ that the base oolong here has got to be a wuyi. It’s just got that “earthy” taste to it. I didn’t think to put the leaves through an initial rinse, and I feel like that might have helped with the first cup’s “dirty” taste. It was sort of Meh. With the second infusion the dirt taste definitely backed off, but I could still tell that it’s an earthy oolong with just a hint of orange. The orange truly is a background taste in this tea which really makes it pleasant. I’ve fluctuated my rating quite a few times: I just can’t make up my mind on this tea. I am indeedy-doodle curious about cold brewing this and will try it in the near future. NE

An absolutely horrible name for a tea… but it tastes great!

I say horrible name because it gives the assumption that oolongs are used for weight loss. Simply put, there is no proof of this. End of discussion.

However, the tea itself tastes quite smooth. There is just enough orange flavor and it isn’t overpowering. My 2oz. sample is almost gone. The leaves are large and open up a lot, so make sure to give them a lot of room

Simply put, there is no proof of this. End of discussion.
Yes. This. Same thing with pu-erh. Miracle food, it does not exist.

The orange taste is just a hint, sort of in the back of the mouth, but its definetly there. It brewed to a burnt orange/ochre color…much lighter and not nearly as “red” as normal black teas, and not the pale yellow straw/green I associate with green and white teas. Complex flavor, but not in the class of some of the Darjeeling’s I’ve been sampling lately. Slightly tannic, especially as it cools, and/but not heavily astringent. Mildly grassy smell when steeping. Used 1 heaping teaspoon, as suggested on the sample

Essentially tasteless and it’s no good as ice tea, either.

The orange scent and flavor are quite mild, which suits me just fine, as the oolong is smooth and rich on its own merits. Shades of roasted chicory and chestnut. Slight astringency creates a clean finish.

This is a nice sized sample in a sealed packet. Too much to be sipped down in one sitting. It’s enough for two servings.

This has a faint orange fragrance in the packet, and I don’t smell tea underneath. The leaves are dark with curls of orange peel among them.

After a rinse and an initial 15 second steep in the gaiwan, the liquor is darker than I expected, sort of a natural honey color. There’s a dark oolong stonefruit aroma with a slight citrus note.

I get what Rabs said about this, there’s an earthy flavor. Even after a very short steep it’s almost bitter, which is disappointing. I get not much in the way of orange flavor. It’s very faint. It could be a fair amount stronger without running the risk of overpowering the oolong base.

Second steep, 20 seconds. The liquor is darker, a sort of brandy color. More orange in the aroma, along with the typical dark oolong toastiness. Still not much orange in the flavor, and as dark oolongs go, this one doesn’t seem to have a lot of flavor to the base, either. It’s not bitter on this steep, but it doesn’t have much complexity.

Third steep, 25 seconds. The flavor has opened up some. There’s a bit more orange flavor, and a rather pleasant, thick mouthfeel. Some astringency and some peach-pit notes starting to emerge from what seemed before a sort of generic woodiness. A slight bitterness at the finish.

Fourth steep, 30 seconds. Pretty much the same as the third.

I may fiddle around with this through a few more steeps, but it’s not doing much for me. It’s drinkable, but it doesn’t bowl me over.