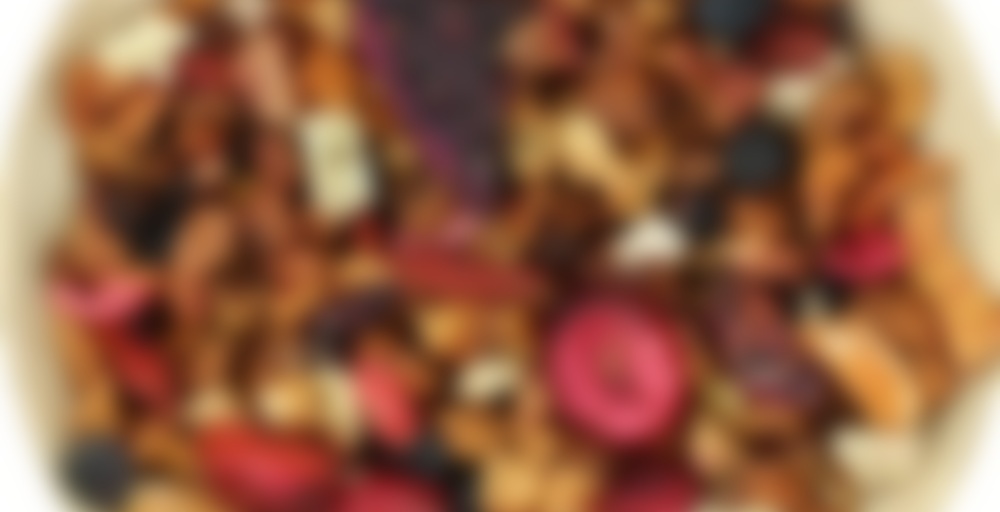 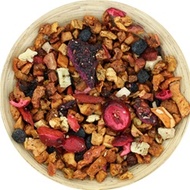 Pink is the universal colour of love, and it’s true, we are totally in love with this combination of exotic dragonfruit, goji berries, chokeberries, elderberries, cranberries and papaya. It’s full of sweet berry goodness and delicious hot or iced! Add some fresh berries to your infusion for an extra pink pop!

Brewing Instructions: To prepare a perfect cup of Herbal tea, use 1 tsp loose leaf tea per 6-8oz of boiling water and steep 4-6 minutes.

Oh God this tea is good. It’s juicy and pink and DRAGONY.

No, seriously, this tea is wonderful. You can taste the berries and it’s tart without being too tart and mmmmmmm no hibiscus!

Dragony?! Hee hee. I don’t actually like dragonfruit, but with that sort of raving review I’d definitely try the tea!

Everyone should try this tea!

ooh! no hibiscus is a bonus!

No hibiscus is always a plus in my books.

I agree with Jillian.

I didn’t think it was legal to make a fruity tea blend without hibiscus anymore, what with the way it’s been contaminating everything lately. Nice to see a tea (and a good one, at that!) that is wonderfully hibiscus free.

not a clue in the world, I’ve never had dragonfruit. I should try it, though.

Fresh dragonfruit may taste better than I think… the quality in some grocery stores is dodgy. Either way….!

I always considered dragonfruit to be quite bland whenever I’ve tried it, but as Krystaleyn said, the quality of the more exotic imported fruit in the stores isn’t always the best.

I clicked on the tea because I was looking for something else and am just completely captured by the look of it! It looks like muesli with freeze dried berries in it – I want to have some for breakfast!

Okay, you guys are gonna kill me for this one but I didn’t love it as much as you did! It is nice, and I can definitely see it iced in the summer but I want to blend the hell out of it with raspberry juice. It was really really light for me. The flavour is lovely, and once I started having supper along with my cup they did become more pronounced, but . . . I don’t love it.

Boiling 5 min, 0 sec
Yours I Like This
9 likes
8 comments
Edit

Oh good, you Canadians are killing me with your Tealish posts!!! Please tell me I’m not missing much! ;-)

But you’re in the home of Starfleet. How is this ever a bad thing?? :D

You’re only not missing out if you DON’T LIKE AMAZING TEAS! >.> is not helpful at all

Seriously. Thank you for this tea! I used the whole package and made two giant cups of iced pink goodness after a rousing game of Just Dance! I don’t care that it’s freezing outside, I’m sweaty and I want iced tea dagnabbit.

I didn’t remember there was no hibiscus so I put a giant squirt of agave. It does taste pink! This is easily one of my favourite fruit blends – I am ordering this next summer without fail.

Yum!
This tisane… tastes like PINK!!! Which is odd because there’s very little colour in the brew. Maybe a hint of pastel.
At first when I sipped, it was pretty bland and sour… but then I added a teeny bit of agave and voila! berry cotton candy in a cup.
This is one I’d seriously consider buying more of, if only I didn’t have so many in my cupboard already. I’d reach for it often though, so I may end up caving next time I wander by the shop.
Oh and the best part? eating the fruit afterwards. I had nothing to wash out of my strainer!

Two of you logging this tea today… argh it sounds so good!

Oh it is delish!! but not exactly cheap.

I had this last night and it was rather more flavourful. And, looking at my previous note, I’m surprised at the mention of how pale it was since last night’s cup was quite pink! I must have got more cranberries or gojis last night, I guess. Anyway, I’m raising the rating since it is delicious and went further this time.

This tea was really surprising.

I did a terrible job of brewing it. I put in closer to 2 tsp of the tea, and mindlessly left it sitting for 10 minutes, instead of the 6 I was aiming for. I was worried I was going to have a bitter, undrinkable mess.
But it was good. Really good. Despite the fact that the bag smells strong, the taste was pretty light, comparatively. A delicious berry flavour, noticeable dragonfruit, and only a hint of tartness. But I guess that’s because it’s (mercifully) hibiscus-free.
Pink Dragonfruit is probably going to become one of my go-to berry teas.

Issues: Next time I brew it, I’ll still probably use the same amount of tea; I’ll just be sure to keep an eye on the timer. This bag isn’t very economical. Lots of tea for a light (but good!) taste. Also, if we’re getting into semantics, this is really more of an infusion than an actual tea. I kept finding massive chunks of the dried fruit!

My second day visiting stores while in Winnipeg we went to two stores, but took some time in between to go out for lunch. I requested that we go to the Prairie Ink in Grant Park because I adored Prairie Ink when I lived in Saskatoon and I had no idea that Winnipeg had one as well! It was a deeply nostalgic moment for me, seeing as I used to eat at the Prairie Ink in Saskatoon almost weekly – it’s my favourite restaurant!

I ordered the most amazing watermelon, red onion, and feta salad – it was easily the best thing that I ate on the entire trip! With my salad I had a pot of tea; I’m not actually entirely sure this is the tea that I had though. I had originally asked for a spiced apple tea, but was told they were out of stock so I asked the waiter to just pick whatever his favourite tea was as a substitution. This is what he chose; and all he had mentioned when he served it was that it was a dragonfruit tea. Prairie Ink only serves teas from Tealish or Tea Forte, and after a quick Google search later in the evening I saw that Tea Forte doesn’t carry a dragon fruit tea – but Tealish had this one. So my assumption is that this is what I drank.

It was actually really lovely; reminded me a lot of the dragonfruit tisane that I used to buy all the time from Cuppa’T – that one was a dragonfruit cranberry, and this had the same tropical, sweet dragonfruit notes (with a hint of apple) and crisp tartness at the finish. Very, very pleasant! And smooth!

So this tastes like dragonfruit while iced but there is also something that tastes/smells like cigarettes. I’m hoping the plastic of the iced tea press didn’t absorb the cigarette smoke from the chainsmokers who live in the house. This is the first I noticed it so fingers crossed it’s the tea.

(And I say that with kindness as a former unrepentant smoker.)

Has anyone been steeping lapsang souchong in your press?

Also, the dragonfruit I have eaten doesn’t seem to taste like much.

I don’t believe so considering I’m the only one who touches my presses. Though I did make The Woman iced once and that has lapsang. However, that was a while back and I hadn’t noticed the cigarette since then until this tea. I’m hoping it was just a fluke cuz that would suck if my press absorbed cigarette smell

If you make something else and get the same smoke smell I’d give the whole press a SUPER long soak in vinegar, and then follow that up with an equally long soak in a denture tablet bath – that usually kills more lingering smells/flavours.

Thanks Roswell Strange. Hopefully I won’t need to do this but it’s nice to have a plan in case I do.

oh man..this worked out so well as a cold brew today. Just the right amount of sweet and dragonfruity taste. if i could get every cold brew cup to taste like this, it’d be worth picking up again heh.

How did you cold brew it this time? What went right so I know for when I try lol

honestly, i think? i just added a little more leaf….maybe all the good bits were at the bottom of the bag. and it was only about 6 hrs?

I’m going to admit that I made this tea twice for this review. I used half of the 50g packet to make a pitcher using 4 cups of hot water topped up with 4 cups of cold water, added some agave nectar, and left it to sit in the fridge overnight. However, this pitcher was too weak and watery in flavour.

I then brewed the remaining stuff left in the packet with 3 cups of hot water and added 3 cups of cold — but the resulting iced tea was still too weak and watery. It was a bit sweeter, but not by much.

Despite the weak flavour, I still do taste and smell fruit but it’s fairly indistinct. The tea is a pale peachy-pink, but ultimately, the nice colour wasn’t enough to wow me. You’re better off just dumping all 50g into a single pitcher and letting things work from there.