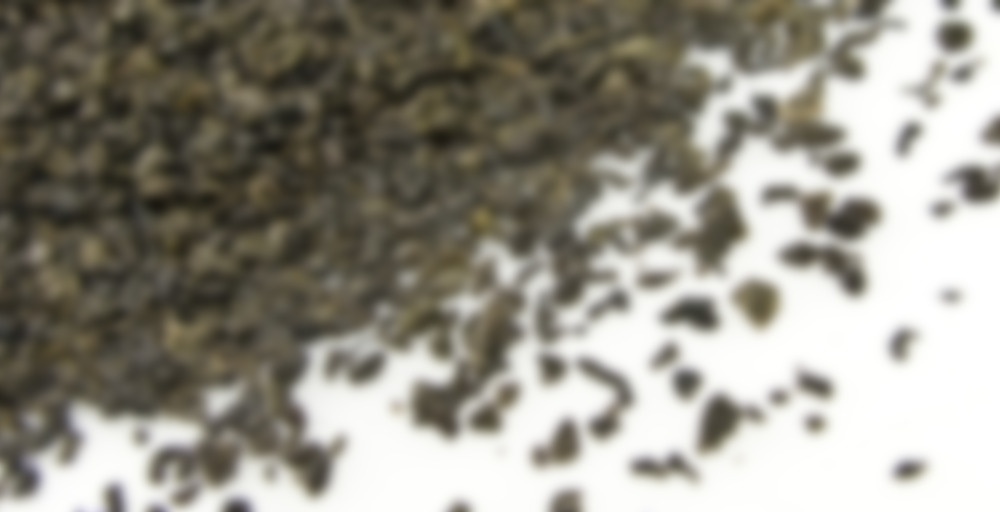 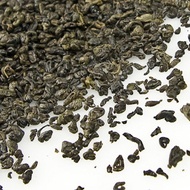 One of the best-known Chinese teas, this has the strongest and most robust flavour in our selection of greens. The tightly curled leaf balls resemble shot pellets (hence the name, which was coined by the British) and open into larger leaf particles when brewed. A strong yellow infusion has an assertive aroma with a waft of smokiness. The flavour is powerful, rich and full with fresh bitterness and a hint of dry astringency.

Sampler Sipdown September! Another of my T2 sampler stash, from the green tea sampler pack. I’ve had such a run of green teas I’ve been underwhelmed with, why not keep it up? I don’t hate Gunpowder Green (I actually don’t mind it as the base in Moroccan Mint blends), but it is definitely my least favorite green tea I’ve tried so far, so… may as well get this sampler out of my cupboard and be done with it.

1.8g in 350ml 175F water, western brew. To be fair, this is probably the least smoky gunpowder green I’ve had (as in, I’m not getting that note at all for some odd reason!), so depending on your preferences, that could be either a good or bad thing. I wonder if I just brewed it on the light side? Personally, that’s a good thing for me, as that is typically the reason why I don’t really like them… reminds me too much of lapsang souchong, I don’t mind subtle smoke notes, but really don’t care for a strong smoky flavor, especially if the tea flat-out tastes like tobacco. Having this tea right after the Young Hyson from yesterday, I can really see how the Young Hyson was very similar to Gunpowder Green, despite not being a pellet tea. This one also has that sort of dill pickle fermented vegetable taste to me, which I noticed in that tea, and the Young Hyson had the smoky finish of a Gunpowder Green (still not sure why I’m not getting that here…). I think there is something about that pickley taste that is coming off as “musty” to me, because I’m getting it here too, and this tea is still pretty fresh; not a year old yet, at least based on when I purchased the tea. So perhaps age wasn’t the problem with the Young Hyson, and this is just a flavor that reads as off to my particular palate, the way mango flavoring in teas tend to always taste oddly metallic to me. That said, this tea is still way better in comparison to the Young Hyson I drank yesterday. I still don’t particularly like it, but it is far more palatable. The musty-taste I get is less musty, so the grass and hay notes are stronger, and the absense of smoke is always an improvement for me. But despite being a huge pickle fan, that fermented pickle/dill taste in teas is just musty and gross to me.

Well, now I have Bi Lo Chun and Lung Ching samplers left in the Chinese green sampler bag. The worst is over.

This is a refreshing green tea. It has a light balance in its color and taste. A perfect green tea to enjoy, it has a more delicate flavor compared to the usual green teas. It is perfect to be drank piping hot, room temperature or chilled with ice. The flavor is certain to please anyone looking for a non flavored green tea.

Its nice once in a while to have a plain ol’ green tea rather than flavoured ones. I love this in the morning because its a perfect pick me up and its strong!

I haven’t had much green tea, but this was flavorful and smoky, while still being quite smooth. I found if I steeped it at 80 celsius, though, I had to steep much longer than I expected to get a colour and taste out of it.