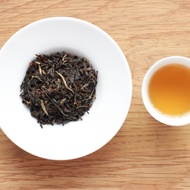 A black teas from Laos with this quality of manufacture is almost unheard of. Our dedicated producer has thrown convention out the window and began making teas that rival India and China. This rolled, jet black tea with golden buds is a sure sign Laos is on its way.

This tea was strong and flavorful. A very good choice for an every day tea.

My first experience of a tea from Laos, this one, Laos Black #05 was included in a Steepster Select sample set. This tea was not produced in India, but the flavor and demeanor and scent and dried leaf form are all very Assam-esque. Which is to say that this is a good breakfast brew: heavy and stout and fairly smooth.

I ended up drinking Laos #05 with cream by force of habit. It probably would have been perfectly fine au naturel, but I associate Assam maltiness and cream as perfect partners. The adulterated brew looked greyish brown more than caramel colored, and the unadulterated brew was dark amber, not red, which is no doubt why.

I followed the instructions on my envelope and so brewed only for a couple of minutes, though ordinarily I would infuse this type of tea for a full five. I’ll definitely try a second infusion with the presumably not-entirely spent leaves later today.

(1st steep: 2 min) So it may be because I brewed beer this weekend and the vanilla pound cake that was delivered by the office food fairies, but I pick up a solid malt aroma from this tea. It reminds me of grains after the sugars have been extracted so it is not sweet, but there is a decided grain note. The first flavor that I taste is clover honey. It is a strong flavor and continues to linger after the tea has been swallowed. As the tea cools, the honey flavor mellows a bit and allows the grain and malt come back. There is a very slight astringency at the end which dries the mouth slightly, but not enough to be unpleasant or remove the flavors of the tea.

(2nd steep: 2.5 min) The second steeping of this tea had a similar aroma to the first steeping. The bread and grain are still pretty forward in this tea. There is almost no honey present. However, it is still a pleasant tea to sip on in the afternoon. The flavors still linger after the tea has been swallowed.

It’s alright… Nothing special to me but tasted like a black tea. Dry and a little bitter at times.

Good morning Steepster.
I am having a rough day already as shoulder and arm pain kept me up again last night but that seems to be more of my normal routine than not. Also I drank some yellow tea around 5 pm and I should not be drinking caffeine at all that late. Just couldn’t resist!

This came in the March Steepster select box, I believe. It’s a nice medium bodied tea, malty and with no tannins or astringency. It’s nice enough but I wouldn’t say it’s bowled me over in terms of its flavor profile. This is pretty good plain but I also enjoyed it with some soymilk. Definitely a decent tea but not something I would really need to keep on hand.

Sorry that you have to experience so much pain…hope the tea helps a little.
You just reminded me I have this awesome yellow tea I keep forgetting about, added to todays list!

Thanks Tea Fairy. Of course I am very comforted by my gigantic tea collection, lmao :)

The aroma was very unusual. Some of the other notes on this tea suggest a tomato aroma, and I’m not sure that it was tomato that I smelled with this tea, but, it definitely smelled different.

It also has a different flavor. In this case, different is definitely good.

Rich with a medium body with a sweet, honey-like flavor. Malty, earthy, and barely there hints of smoke. A very easy to sip tea.

This is a superb black breakfast tea, not too bitter, gentle tannins, and great body. I could easily see keeping this as my new standard breakfast blend.

Tooch summed it up very well: A very warm and cozy tea, like a fuzzy blanket or a hug in a cup.

Brought my second sample packet from a previous Steepster box into work, and I brewed it this morning. I really should bring a teapot into work. I think these leaves really need a chance to expand, and my cramped work mug is not the implement in which to do it.

I’m not liking it as much this second packet, but it’s really hard to brew a great cup at work, so I don’t fault it. I can still tastes the hints of awesomeness that made me really like the first packet.

Also, I may be grumpy and overly picky this morning. :D
harumph.

Tea at work is such a PITA! I want my variable temp kettle and all my home equipment, but it’s just not reasonable. The hottest water I can get is 182 degrees. :(

Yes it is! I have no idea how hot the water even is in our hot water dispenser. I am flying blind! I should report this to HR, this is not a tolerable work environment ;) LOL

Exactly! I took matters into my own hands and brought a battery operated thermometer. I already have that kind of thing for brewing beer, and I really wanted to know how hot the water gets coming out of the dispenser.

I’ve taken to brewing a variety of whole leaf oolongs grandpa style, since they tend to do well with the 180 range temps, and clean up is super easy.

I have a jasmine that I used to brew grandpa style a lot, but the tumbler I used was plastic and started making everything taste plastic. So it got tossed. Ick.

I will have to check into a battery op thermometer after my spending fast, and rearrange my work teaware.

Found this yesterday afternoon. There is a nice malty honey scent. Maybe a little darker than I remember. It’s still a nice, sweet flavour. Good with my b-day cake.

A very warm and cozy tea, like a fuzzy blanket or a hug in a cup. The subtle sweetness in the finish complements the roasted and malty quality of the tea. A touch of nuttiness rounds out the well-bodied flavor. Even though I have never had a tea from Laos, I find this tea in a way very familiar, as if I have already enjoyed it before. 9/10, a wonderfully enjoyable tea for colder days.