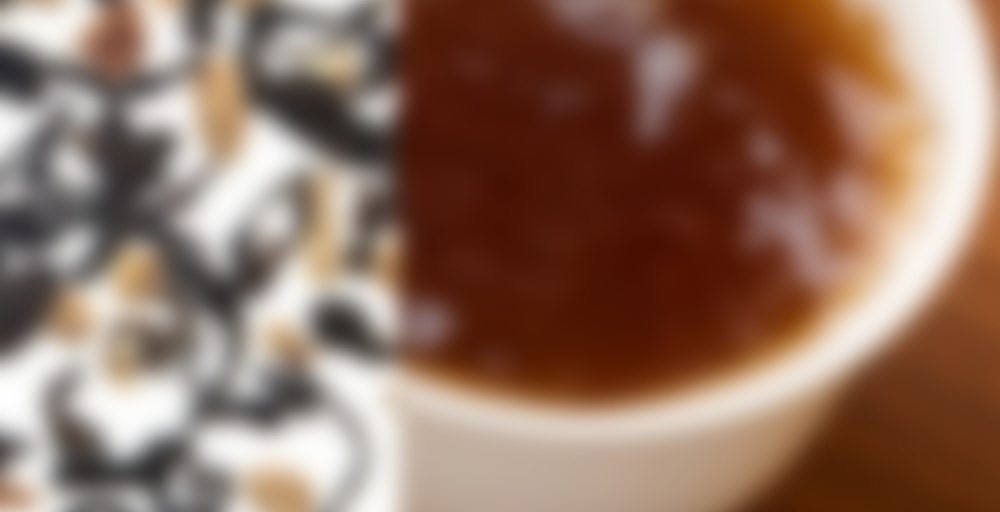 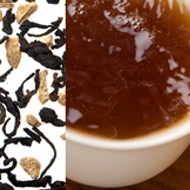 Tea Story: Deeply warming, digestive, and comforting- a triple dose of well-being for your belly!

The Ginger Pu-erh is especially good for keeping cozy on those days that start of hot and end with a chill. It’s also a great, reviving tea after a day on the slopes- it will warm your bones up again better than any hot chocolate!

Food Pairing: An exquisite after-meal sipping tea. Pair the Ginger Pu-erh with fruity deserts like an apple turnover or pear almond cake. Or serve the ginger pu-erh along side desserts with rich spices of cinnamon and nutmeg like a pumpkin pie.

Drink the Ginger Pu-erh for its digestive properties during Dim Sum sampling marathons, or when eating more than your fill of Mediterranean food- with its zesty lemon seasonings.

I know I’m starting to sound like a johnny one note here. Or perhaps as though I’ve had a thorough brainwashing prior to induction into the cult of Samovar. But I am now officially… what is it? I’ve lost count. I think it’s six for six, or maybe I’m up to seven for seven. Perhaps I should just say I’m batting 1000. Or bowling 300. To sum it up, when it comes to Samovar’s offerings, I haven’t met one I wouldn’t buy again and the trend continues with the ginger pu erh.

In the sample packet, the aroma has a surprising chocolate note to it. Chocolatey, spicy, leathery. As with other Samovar teas I’ve tried, one of the most interesting things about it is that it isn’t fixed. It’s like shifting sand. Sometimes the chocolatey smell is primary, sometimes the leather, sometimes the spice. They each swirl forward and then recede, shift, do it again.

The rinse awakens and makes more powerful the ginger and orange scents. The ginger is spicy-sweet, not at all harsh. After steeping, the aroma evens out again. I found the chocolate again, and another surprise, a coffee note, along with leather, earth and spice.

The color of the liquor is very like how I remember the orange pu erh looked. Deep, woodlike. I think I said mahogany, can’t recall — it’s not the black petrochemical look of the Numi pu erhs. It’s deep, but translucent.

This may be the most successful use of ginger in tea I have experienced. Of course it is the only use of ginger I’ve experienced in a non-green tea except for in chai. What makes it successful is that it is part and parcel of the blend. Though it is definitely a focal point, it doesn’t blot out the other flavors. The orange is present, taking a far back seat compared to its role in orange pu erh (as it should), and the pu erh itself is deliciously smooth, rooty, and wet-earthy.

And with that, I can hit the free shipping number without waiting for Breakfast Blend and Chai to come back in stock. So I’ll be placing an order today. But not until after I’ve held this one’s hand through its remaining steeps.

Note: I am definitely going to have to recalibrate my pu erh ratings. Samovar’s are qualitatively better than Numi’s to my taste (even the Numi chocolate). But I will probably wait to do it until I’ve tried some other types of pu erh.

It’s the overall quality of the blend and the tea I’m comparing, not the individual flavors.

I have this! Sounds delicious!

It is. I like the orange just a wee bit better, but I can definitely see being in the mood for this instead sometimes.

I’m surprised no one else has posted a tasting note for this one yet. I was looking around for something new to try from the yet-to-disappoint Samovar and I ran into this one. I’ve already tried Blood Orange pu-erh so I decided to give it a try.

The first thing I notice is that it is fairly similar in its qualities to Blood Orange pu-erh. The main difference here being that instead of the scent and flavour of blood orange, it’s ginger. I suppose this makes far more sense than it should. I’m still not certain which one I prefer more… I suspect I’ll have to continue trying this one out. Unfortunately I only ordered a small can of it, and I think I made a mistake of ordering a larger can of the other “experiments”… More on that in the other tasting notes to come.

The good thing about these Samovar pu-erhs is that they can be re-steeped an almost unlimited amount of times. (Unlimited to me is around 5 times in one day, usually 3-4 times at work and one more at home). With pu-erhs from other places I find that after the 2nd or 3rd steep it’s lost its touch completely. Just something I thought I’d note.