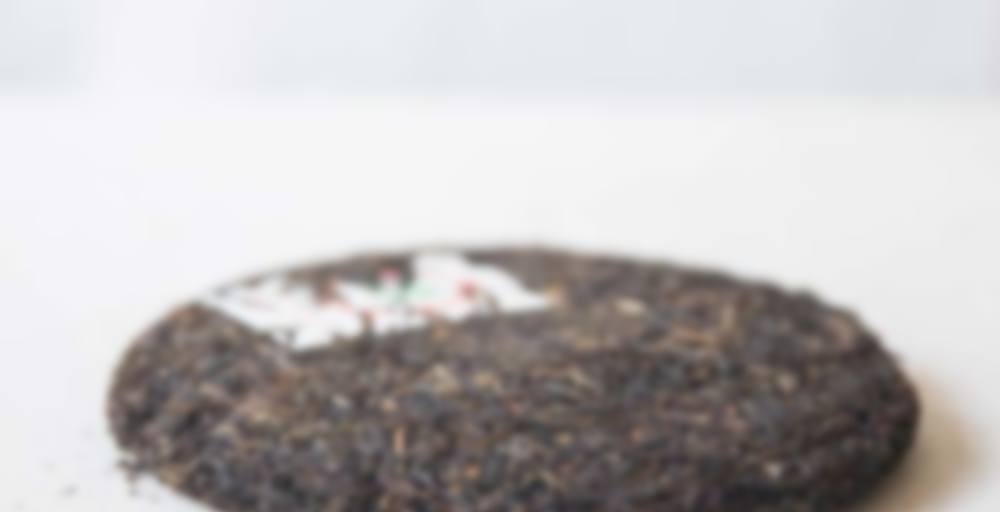 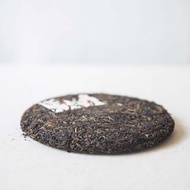 by Bitterleaf Teas
78
You

Just shy of 20 years old, this aged raw puer still packs a punch. Any awkward phase in its development seems to be in the past, as this tea currently produces a smooth, yet lively brew. A noticeable energy and body feeling are accompanied by a lingering huigan – although this tea does not come off as particularly sweet up front. A deep, lasting camphor scent and pleasant “woody” fragrance is also present.

While there is little bitterness in this tea, its rougher side seems to be more or less restrained, but can still be brought out with longer infusions if you’re not careful. Energetic, yet mature, this is a thoroughly enjoyable aged tea good for now or the future.

This tea (along with its ’95 cousin) was sourced from a somewhat eccentric private collector we have known closely. Always entertaining to drink with, his stories tend to extend past the limits of plausibility and induce a reaction of “whatever”…

With that said, we have no reason to doubt that this is a 1998 Zhong Cha production from the Kunming factory, dry stored by only one previous owner. Each cake comes with its original wrapper, some of which may have bug-bitten holes.

Finally getting around to trying this tea and having owned it for, oh I don’t know, four years!? Maybe even five, potentially…

I brewed it up Grandpa style and I just don’t think that was the best way to steep it up – especially the first time when I didn’t have a great understanding/grasp on what the usual flavour profile is. I found it rather green/vegetal and biting, with a lot of dryness and tobacco notes. Not the kind of flavour profile that I personally gravitate towards in sheng, and it was just so concentrated that it made for a rough cup. I still drank a few “top ups” of my grandpa brew to not have wasted the leaf and see if it would improve, but…

Very interesting tea. This is the first very aged Kunming tea I’ve tried. The flavor profile kind of reminds me of mid 2000s Guangdong sheng, but much milder tasting. There is a camphor-like note here, but much milder than with Guangdong or Hongkong teas. No bitterness at all in the liquor either. This tea makes me relaxed and sleepy, and the leaves still look very green. While I wouldn’t get a full cake of this, I found the experience very educational.

I admittedly have less experience with aged sheng than young sheng, so I’m in the deep end here ;^) Upon rinsing the tea, I noticed aromatics like sweet tobacco, dry wood, raisin / date and a spicy minerality. As the session progressed, the more youthful aromas started to peek through…stewed peaches, stone fruit and a bit of buttery pastry. The first two steeps have a clean, dry wood flavor. Not super complex, but clean and enjoyable. The more youthful sweetness starts to build later in the session – I am getting a bit of stone fruit flavor along with a cooling sensation and very subtle huigan. This tea is either fairly simple, or it is difficult for me to unpack all its complexity, but I do like it. The astringency throughout the whole session was very drying and intense. Definitely a tea to take it slow with. The qi was moderately intense and very enjoyable. I don’t think if I would go for a beeng of this, but glad to have tried it! I highly recommend their Whatever ’95 ripe puerh, going to get a brick of this as soon as possible :~)

This is the oldest tea I’ve drunk to date and besides one semi-aged Xiaguan tuo my first foray into aged sheng. Perhaps my expectations were too low, but the leaves in the sample I received were larger and more intact than I’d expected; not that this is necessarily gushu or anything, but still. My sample consisted of one long, thin ten-gram chunk of the surface layer along with accompanying individual leaves. I’m not sure if the cake was just originally pressed loose or if it has loosened over two decades, but the compression in the chunk I received was fairly low. There wasn’t much aroma to the dry leaves, which obviously means there weren’t any funky storage related odors either.

I brewed this tea in a gorgeous new wood fired teapot I purchased through Bitterleaf Teas. It’s made from clay from Dehua and I’m dedicating it to aged and semi-aged sheng pu’er. Since it has a really fast pour, I used the same ratio of leaf to water that I would use with a gaiwan, so 12g to 180ml. I rinsed the tea once for 10s and after a ten minute rest I proceeded to do ten infusions, for 10s, 10s, 12s, 15s, 20s, 30s, 45s, 75s, 2 min. and 3 min. The rinsed leaves had a somewhat fruity scent of dark hay. After cooling a little the smell almost reminded me of an apricot pie.

As I mentioned, I don’t have much experience with aged teas, and as such I struggle with describing the first couple infusions as my palate was trying to get accustomed to the flavors. The first steep was fairly strong, yet gentle and smooth. I struggle with descriptors like woody, so I’m not sure if I’d use that word here, however I was detecting some smokiness in the tea and it made me quite thirsty without being drying. The second infusion while still having base notes to it also felt brighter in a way, to the extent that it felt almost prickly on the tongue.

The third steep was really mineraly, with an almost metallic finish. It was increasingly drying and also coated your tongue with a sensation that made you feel like it was burned. The mineral taste continued in the next steep, but this time merged with something else and perhaps even hints of cream. The mineraly nature was only ramped up in the fifth steep, which was super, super mineraly and almost too much for my tongue to handle.

In the sixth brew the mineral character finally settled down a little, starting to be about even with something else that was beginning to emerge in the tea. At this point I noticed this tea might taste better if you let it cool down a little. While the mineral taste continued in the next steep, it was joined by hints of some mineral sweetness that was starting to emerge. The steep was also very clean tasting in general. At this point I noticed the muscles in my lower back starting to ache and soon after I noticed feeling very calm and relaxed. The qi continued to move upward, growing more intense. It spread to my upper back, chest and head. It may have even made me feel a bit tipsy.

The eighth steep was similar to the last one in flavor, with maybe a touch more of that hinting mineral sweetness. At this point I was starting to get a vibe from the tea of it being somewhat medicinal, of it being fairly cleansing. I took my time brewing the ninth infusion, because at this point I was starting to feel quite tea drunk and my motor control was starting to be a bit wonky. The taste was still chiefly mineral, but instead of the prior hinting sweetness I got some of the earlier creaminess in the finish, which was a weird combination with the mineral taste. I should note this was the first time the flavors were starting to drop off a little as well.

The tenth steep was the last one I did and this was where the color started to fade for the first time, although this wasn’t reflected nearly to the same degree in the actual flavor. There weren’t any notable changes in the taste, so I decided to stop here, figuring I’d seen what this tea had to offer. The tea could have possibly gone on for an infusion or two, but that would have most likely required extra long steeps and I didn’t see enough value in trying that.

All in all an interesting first step into the world of aged pu’er. I generally don’t tend to like mineraly flavors very much, so the flavor profile wasn’t really for me. The flavors also shift very gradually without any dramatic changes at any point, so flavor-wise this isn’t the most dynamic of teas. I think rather than the flavor the cha qi is the highlight here, and although not the most intense pu’er I’ve drunk, I must admit I was caught off guard. I could see those seeking the tea buzz you can get from a young sheng but without the stomach twists drinking this tea. In terms of body the tea is fairly light and the longevity and the way it brews seem very similar to me to how a younger average sheng behaves. The tea brews a woody orange. Fairly light, nothing super dark. This to me would suggest that you could easily age this tea for at least another ten years if not more if you wanted to. How it would age, I have no idea.

Not the tea for me, but a valuable experience in learning more about pu’er and aged teas. More reviews of aged raws are to come.

Welcome. You write much better than I.

Back to some puerh!
I have been searching for a decently aged sheng (besides 90HK) for “daily” consumption, and I have yet to find one that is both easy drinking and affordable; this may be an endless journey.
The leaf is heavily compressed and dark with very faint scents of earth and dry wood. I grabbed my zini and warmed her up and then put old lumps inside. The scents open up into some strong earthiness and slightly sweet with oak and cherry. The aromas are mild and this was definitely stored on the dry side. I washed the leaves once and prepped for brewing. The brew is dry with a heavy bitterness. I can grab at lots of cedar notes with a slight sweetness towards the back of the throat. I couldn’t much of any huigan, except for some slight dried plum notes that wandered to the back. The brew gave me quite a bit of tongue numbing. The qi is moderate and approaches soon with a good head buzz. However, the tea does not go down easily. The brew tends to leave an acrid taste on my tongue. I continue to brew and the soup still almost crosses over the line to the sweet territory, but it is stagnate above staying in its home land of wood, bitters, and dry. I finish the session with a nice qi in my head and some float-y feelings. The tea is fair. I peak inside my pot and do some digging, and I note that I spot a few green and yellow leaves; which is a bit odd for the vintage; however, this may due to the heavy compression. The tea is okay, but in relation to price and what my stomach needs, this is not what I am looking for.