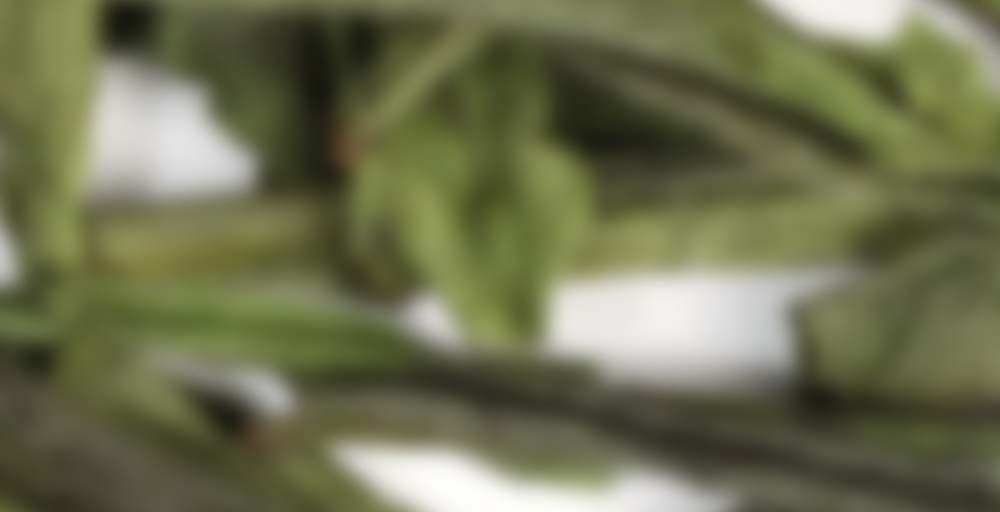 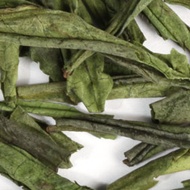 by Adagio Teas - Discontinued
77
You

One of the ten famous teas in China, Lu An Gua Pian originates from Anhui province. The deep green, long, curled leaves smell sweet and fresh. Once steeped, they yield a light yellow colored cup with delicate vegetal notes and a roasted seed-like quality reminiscent of toasted pumpkin seeds.

Sipdown. Finishing off the last of the sample of this. Brewed in my 2-cup teapot, then poured over ice in the teacup. It’s only 9:30 AM here and already it’s stifling. Yesterday I spent the whole afternoon hiding in my room with the A/C – I brought my kettle and tasting cup up with me, and really only came downstairs to swap out the teas.

I’m docking the rating a few points, just because I’m not as enamored with it as I was – it’s great, but after trying all these delightful offerings from Teavivre, I’m just not too excited about this one. Still good, though.

So today started as a horrible day when I was awoken to find out that my debit card info had been stolen and used to purchase someone memberships on several dating sites, hope those work out for them…

That aside I figured that this tea would make me feel better. Though I ruined the smell of the dry leaf some time ago it still tastes amazing. Not as good as the day I got it mostly because i suppose it is getting old but still, amazing. I feel much better after this.

OMG – that’s horrible! I’m sorry that happened to you. :(

I hope you get your money back!

Oh no, hope that gets fixed for you soon! It’s happened to my poor dad a couple of times now. :(

I CONFESS! (not really, I’m sorry …mine was stolen last month and used for google purchases $12.00 over and over and over again. Of course my bank put the money right back in my account within a couple of hours). Had to get a new card though! A bummer!

How frustrating. I hope that gets sorted out for you quickly.

Ugh, hope it works out. It seems everyone has a “my credit card was compromised” story. Did your bank catch it or did you? It’s always bad when you’re the one who finds it before your bank does.

Yeah now I have mine. I was the one who found it since my bank seems to think I’m sad enough to need two dating sites lol.

I decided to give this another chance tonight, since I have a little bit left in my sample bag. This time I tried steeping it for 2 minutes at 175, instead of the usual time I give greens (about a minute).
The leaves for this tea are really beautiful and live up to their description, dark green, long, and slightly curled. I just wish they had some flavor. I’m not sure if there’s something I’m doing wrong or if this is just an incredibly mellow variety of green tea. I get a little vegetal and grassy flavor out of it, but even that is barely there. The tea gets a little bitter as it cools.

Finally finishing this one up. This has a wonderful smooth flavor to it. It’s vegetal and toasty with hints of buttery flavors. Very nice :)

Its a very nice in between chinese green. It’s nutty and vegetal, sweet and dry. The leaves remind me of bancha and it does have a resemblance taste wise as well, but its also richer.
Nice reliable tea.

Packaging: This was a good sized sample that came in an opaque plastic package nicely decorated with their colors, the weight and the name of the tea on it, and information on the back about Adagio.

Age of leaf: I was not able to find this information on their website.

Appearance and aroma of dry leaf: smells fresh, vegetal, sweet. Like no other tea I have seen: large pale green leaves with a kind of pleat down the length of the leaf (or tightly rolled like a scroll of paper); some small bits.

Flavor of tea liquor: sweet, fairly tasty for a green tea. Not much flavor on the third.

Appearance and aroma of wet leaf: standard vegetal aroma, but not very fresh; large leaves (like many oolongs I have seen) that were varied in their shade of green, such that most had broken edges; there were also many broken bits; it was fun watching the leaves steep: when they were fully opened (on the third steeping), the pot looked like it was filled with an underwater forest!

Value: I bought this as a sample, and as they have been out of it since I bought it, I can’t get any data on the price (but I think this style of green tea is somewhat on the pricy side).

Overall: I bought this in large part to try some of the famed Melon Seeds. Although it was fun watching the leaves steep, I was disappointed as I had heard it is generally thought of as a quality green tea. There was nothing memorable about the aroma or the flavor. But I am glad I tried it. Not a great first impression for Adagio (but the impression of this reviewer towards Adagio’s unflavored green teas has turned more hopeful since trying their White Monkey). Here’s hoping their other green teas are more flavorful!

Painting update, for those who are following along in my Dropzone Commander Scourge painting adventure. I am almost finished with the red ‘veins’ then I need to do a blue wash, then some bone detailing, then wash those and then I will be done! Well that is not entirely true, I will be done with everything but the Desolator, which I am going to make into an epic showcase piece along with it being a my command unit. That monstrosity is possibly my favorite miniature ever because it is a space cuttlefish and for extra geek points looks like a Reaper from Mass Effect, sadly I cannot just love it and call it Harbinger though since once of Scourge’s other units is a Harbinger…and there is also a Reaper. Ok, that is enough of me geeking out.

I lied, I am going to geek out about tea now, like I do! Today’s subject of geeking out is Adagio Tea’s Anhui Emerald Seed, their name for Lu An Gua Pian, which translates to Lu An Melon Seed, alluding to the shape of their leaves. Most green teas are all about the first leaf, but these leaves are the second leaves with their veins removed and then rolled to give them their fun shape. It has a lengthy history, first showing up in texts during the Tang Dynasty and being a tribute tea during the Ming and Qing Dynasties. The aroma of the leaves is a delicate blend of green beans and sesame seeds with a touch of spicebush flowers and hyacinth. There is also a tiny hint of chestnut at the finish, the aroma notes are not the strongest, but they are pleasant in their delicateness.

So here is where I might make my tea drinking friends do a double take, I brewed this in my green tea seasoned Yixing teapot. Yes, I did it, I have been debating over a year, having heard heard that it can make the tea taste muddied due to the clay retaining too much heat, but I also heard you never truly know a green until you Yixing it. I do not regret my decision, drinking greens brewed in a Yixing teapot is amazing, sometime in the near future I plan on doing a side by side comparison with Yixing and Gaiwan. The aroma of the leaves in the pot are much more green now, with notes of artichoke, asparagus, green beans, bok choy, and a tiny bit of sesame seeds. The liquid got all the floral and sweet notes from the dry leaves, with spicebush, hyacinth, and honey drenched sesame seeds being the predominant notes. There is a bit of green at the finish, so it is not a huge contrast.

The taste is refreshing, it starts with a blend of melon (specifically faint honeydew) and cucumber. This transitions to grass and artichoke, and then it finishes out with sweet sesame seeds and honey. The mouthfeel is very smooth, a midway between creamy and silky, I am really fond of the mouthfeel, it matches the refreshing taste of the tea.

The aroma of the second steep is this interesting blend of vegetal and floral, like one half green beans and artichoke, the other half hyacinth and honeysuckles. It is like Two Face (Ben is playing Arkham Asylum, so Batman on the brain right now.) The taste is really similar to the first, like almost identical flavor notes, well, kinda. It is like someone took the exact same flavor notes and where the intensity was at a 6 before it is now at an 8 (scale not to scale) so that is fun. The aftertaste now has a lingering floral tone to it, which I am always a fan of.

Steep three time! The aroma is a bit of sweet and a bit of vegetal, again blending floral and green in a fun little dance of notes. The taste is not as intense or diverse as the previous steep, it starts out with a touch of spicebush and sesame seeds, then a fun bit of bell pepper and artichoke, and lastly a finish of honey that does not linger over long. Now, is this the best Lu An Gua Pian I have ever had, no, but it is certainly delicious and a good everyday kinda melon seed.

For blog and photos: http://ramblingbutterflythoughts.blogspot.com/2015/02/adagio-teas-anhui-emerald-seed-tea.html

That’s fascinating about the leaves!

Green tea is the only type of tea I drink everyday. I had thought about having a yixing for it but it was never recommended. So glad to hear you’ve actually done it and it’s great!

I was so pleased it worked out, I was terrified the whole time that I would ruin tea and a teapot, but having it work was so awesome. Now I want to experiment with other not often seasoned for teas.

I really love this tea. To me, it is a nice bridge between Japanese and Chinese teas. It has a medium body with slight grassy notes. It is very mild in overall flavor, so I would suggest this for a beginner. Also evident are some woody, floral, and smoky flavors. The first 2 steeps are great, but it tends to quickly decrease in strength on the third. Great afternoon tea on a cold, snowy day!

Mild earthy taste. I feel like if silver needle and dragonwell had a baby, it would be anhui emerald seed. It has the nutty notes of dragonwell, but is very sweet and soft like silver needle.