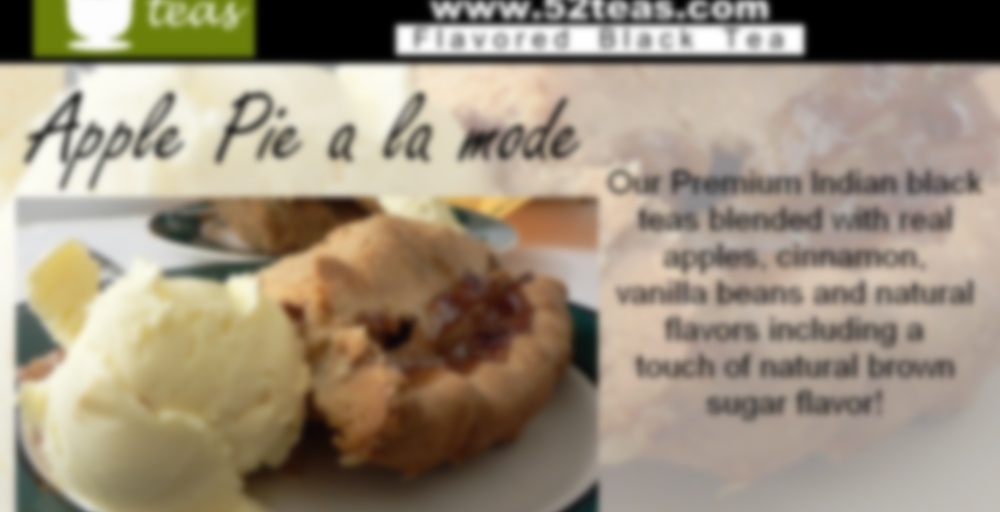 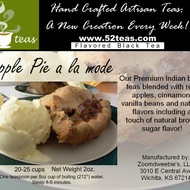 Here’s our take on the all American classic, Apple pie a la mode.

Mucha thanks to Ricky for sharing this tea with me! blows a kiss ;D

I’ve been eyeing this particular 52Teas blend for awhile, being a big fan of apple pie. The interior of British-Columbia is orchard country so in the summer and fall there’s always a good supply of fresh, tasty apples for baking and my dad can bake the best pies completely from scratch.

This tea doesn’t quite make me think of those pies, the crust component is missing for one thing. The apple flavour is nice, but it could stand to be a touch stronger. The sweet vanilla and spice notes are what really completes this tea though. I’m drinking it plain this time, but I can’t wait to see how it’ll taste with some milk and/or honey.

I thought it was better with some added milk, actually.

Thanks to LiberTEAs for another opportunity! :)

My parents live next to a Greek Man who makes pies. He’s had a local restaurant here for decades! He’s famous for his pies. His Apple Pie is one of THOSE pies! One of the pies people will travel for! This smells like that pie – a bit mellower in scent than the actual pie – but it still reminds me of it. I can smell the Apples, Cinnamon, Vanilla, and Brown Sugar scents and it’s yummy to my tummy.

When I sip it I can taste the Cinnamon first, then apple, then a vanilla finish. The taste of the tea doesn’t really taste like the actual PIE part…you know the crust part…but more like the apple filling.

I can taste the cinnamon more and more but it’s still pretty darn close to what I think it should taste like when going for an Apple Pie type tasting tea.

Yum! This morning, I decided I wanted some apple pie! I went a little overboard on the latte part – I don’t think I used too much milk, so maybe I warmed it up a bit too much because, it got FROTHY… fast!

Despite my misadventures with the frothed milk, this is one yummy cup of tea. Here is a link to my review of it on TRB:

I think I like it best with the latte (just don’t overdo it like I did!) because it really brings out the sweet cinnamon notes.

That is EXACTLY why I want that milk frother lol.

The frother is something that really would be an unnecessary purchase on my part, I really don’t have lattes all that often, and I don’t think that would change with the purchase of a fancy gadget like that. Normally, my frothing goes just as planned. I think I just happened to heat this batch of milk up a bit longer than I should have.

However, it is an ideal purchase for someone who has lattes regularly.

Yep I have ‘em daily! And that’s just latTEAS- I occasionally have espresso ones as well.

Another interesting wishlist tea from 52…Frank’s going to really get me to crack isn;t he? LOL

I’ve recently returned from a 2-day tea hiatus. I wanted to stop drinking tea to see if my crippling stomach aches would stop. They did. But, I also suffered nasty caffeine withdrawal, which gave me crippling headaches. So, I have 2 options: 1. Drink tea, be healthier, but have stomach aches or 2. Don’t drink tea, be lethargic, and have headaches.

This tasting note shows which option I chose.

I get stomach aches from tea too sometimes, but if I keep it to 1 or 2 teas per day I don’t really have any trouble. I think having it with tomato sauce based foods makes it worse.

What? That sucks! Have you talked to an allergist?

try switching up teas; coffee makes my sick – i drink it anyway, but try mate only one day, green another….perhaps it’s just blacks

once you narrow it down you might be able to find your limits (1 black a day, rest green, or a few blacks but only with tums)

@Harfatum – Tomato stuff hurts my stomach too! I can no longer eat tomato soup, much to my dismay.
@ takgoti – I don’t think it’s an allergy issue. I’ve had stomach ulcers due to stress before (darn high school), so I think it’s more that my stomach is all messed up.
@AmazonV – Good idea, I’m definitely going to experiment. Black teas are my favorite, so I want to know exactly how much I can drink without being in pain.

What concerns me is that I drink 3 cups of tea per day at most, which isn’t very much. But my stomach is wacky, so who knows. Today I’m drinking only blacks.

I have a ton of homework left for tonight (blah) and a whole gallon of milk that expires today, so I decided to whip up some black tea. I also bought sugar for the first time! Yay! Sugar!

I’m not a /huge/ fan of apple cinnamon flavored things (although I do like apple pie), so I wasn’t expecting to like this very much. To me, it tastes like sweet (well, I added sugar and milk) apple-flavored black tea, with a generous side of creamy graham cracker and spice. I’m not tasting any vanilla, but the milk I added does give it a nice creamy feel. It’s pretty good, but just not my thing. It did, however, exceed my expectations, as I was expecting to hate it. I’m sure people who like apple flavored things will love this tea. My rating is more of a personal preference thing, and not a reflection of whether or not this tea tastes like it should/good. Thank you Ricky for the sample :)

Edit: There’s almost a coffee-with-vanilla-creamer-ish taste to my cooled down cup…an interesting development!

Inspired(!) by Ricky, I went and brewed up a pot of this. I can definitely SMELL apple pie in the unsteeped leaves, they have the familiar black tea base and then what smells like cinnamon and vanilla to represent the “a la mode” and a faint odor of apples and sweetness which is probably the hint of brown sugar. This smells fantastic; both before steeping and as a brewed tea.

The brewing (hot with no additives) tastes like black tea with a hint, just ever so slightly, of apple. The predominant flavors are the cinnamon and vanilla with a sweetness from the brown sugar. All of the flavors are there, albeit very little in the case of the apple, they just need to be married a little differently.

I feel that a shorter brew time (to cut the amount of time to brew the black tea) and adding a little sweetener and milk will help bring this together to make apple pie a la mode.

Will try and repost!

I wonder how this would hold up in a tea float or tea latte float? That’d definitely give it an a la mode taste. You’d probably want to top it w/ a bit of extra cinnamon and nutmeg. But my concern is would the apple get lost in all that milkyness?

I’m tempted to transform this into a float like Frank suggested. I’d imagine it would taste pretty good like that. Might give it a shot a little later, enjoying some pu-erh right now.

I think it needs more apples. The apples are the best part of the apple pie. The second day I tried it, I had more apple pieces, so that made it significantly better than my first cup.

You guys keep saying “float”. I can’t vouch for how it would taste as a float. What I was recommending was having it as a teashake (like milkshake, but with tea).

We do floats here at Zoomdweebie’s too, but they are generally better when you start with a tea soda and then add the ice cream.

Haha, I was interchanging tea + vanilla as a float. I mean floats are generally soda + ice cream, but swap the two… ahhh you get what I mean =P

52teas, I don’t see why it wouldn’t be good- a tea float is just an unblended teashake. I’d suggest making this one flat though. Carbonated apple pie a la mode? Nah…

I think that adding milk and sugar to make the shake like 52teas said is going to be fantastic, and Ricky, you’re right, it needs more apple, but they got the a la mode part right, I just think milk (like milk and apples) might help to brighten the flavor of the apples

YUMMY. Love this as an iced tea. I’m thinking hot tea drinkers will enjoy it even more.

Wish I could have tried this one. Sounds awesome!

I think I need a steep in between what I did, however I was distracted by dinner.

The taste on the first steep was very weak, but held promise of being a light, but not too subtle, spiced black. The second steep went off the deep end because I forgot to watch it and it turned out very bitter keeping me from appreciating it.

I am going to give this tea another shot some other time as I think it has promise.

Post-Steep Additives: German rock sugar-brought in more the sweetness I expect from pie, I also like sugar

I like this one with both milk and sugar. I agree, the flavor is weak, but the milk helps to make it a bit bolder.

i’ll have to try a splash of milk next time when i steep it properly, i was thinking maybe 6 minutes?

If anyone has anything on my shopping list,wih list and would be willing to trade for abit or something please let me know.

Goodness gracious, I do love this. It tastes like apple pie and creamy ice cream, with added tea. It’s warm, comforting, sweet, and oh so delicious in the evening. It goes down so smoothly and deliciously. I think it’s time for me to brew another cup.