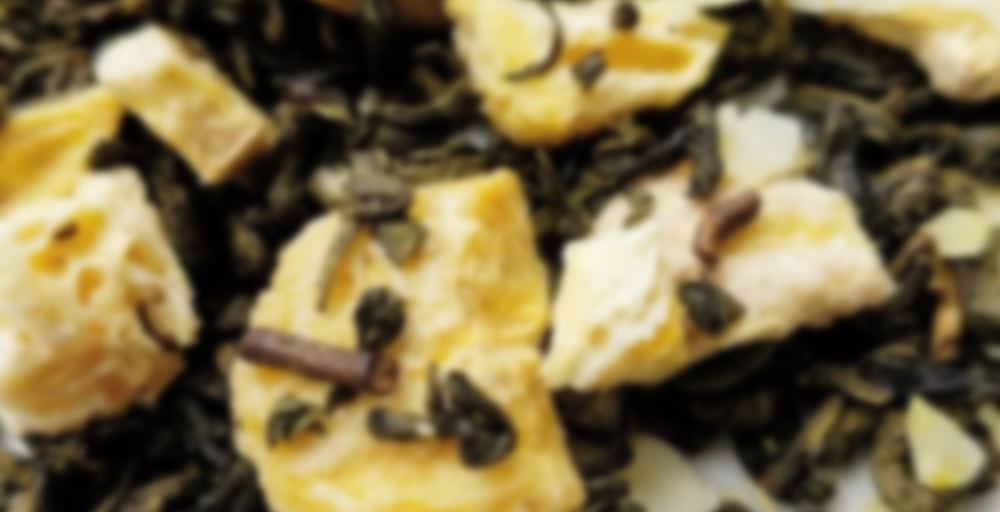 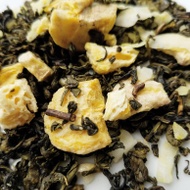 It’s summer and one thing that goes hand in hand with this time of year (at least for me) is iced tea. Sure, I prefer hot tea and I still drink it daily even in the summer but during the hottest times of the day during the summer months, I generally turn to iced tea for my hydration needs. And while I tend to prefer black teas for my hot tea drinking – especially in the early hours of the day – when I’m drinking iced tea, I find green tea (or white tea) much more refreshing. The light, fresh taste of green tea seems to quench the thirst better for me than black tea does.

So I decided to make a summer iced tea inspired drink that tastes great iced or hot. I started with a base of organic Chinese green teas – Chun Mee & Gunpowder – and then I added freeze-dried pineapple and bananas and lots of coconut flakes to create a tropical paradise for your taste buds!

This is so delightfully good.

I am so tired this afternoon. I put in a little overtime today, and work was so busy that now that I’ve finally stopped doing stuff my body wants to slump right into a nap. Not to mention one of my brother’s cats has started waking me up in the middle of the night by sitting on my pillow and staring at my face. He’s a big lovable dummy, but he’s a 25-pound big lovable dummy (part-Maine Coon, according to the rescue) so when he jumps on my pillow it feels like a midnight attack. And he did it no less than four times last night. Maybe it was five? For some reason he’s been doing it regularly for the last couple of weeks now, and I need my sleep. I know how arrogant that sounds. I’m always hearing “oh, that must be nice” from family members with kids*, but I have legitimate reasons for needing extra sleep. One small reason I don’t have kids myself. But now I have this nighttime lurker of a cat who won’t let me sleep. Anyway, I’m rambling. And complaining. Sorry. On to the tea.

This was a sealed pouch, but I have a feeling I’m going to need to drink it quick before the coconut turns on me. The most prominent flavor is the pineapple, but I can almost taste the faintest bit of soap as I’m drinking it. It may be in my head so I won’t add it to the flavors list, but I should probably finish this one soon. Other than that, it’s not too bad but I don’t love it or anything. I’ve had other green teas I like much better. Not many of them, but there are a few. I also think that after having so many pineapple teas from Teavana (my husband was a big Pineapple Kona Pop fan), I don’t really love pineapple teas so much these days.

*I should say, I’m child-free by choice but I don’t hate kids or anything.

I bought the holographic tumbler from DAVIDsTEA and after the delicious teapop from last night, I decided to try another. This tea and peach perrier just isnt as good. Both are distinct and just dont go together well. Oh well.

I like this but don’t love it. It’s better cold brewed versus hot, in my opinion, as the base doesn’t take over the fruity flavours quite as much. Candied pineapple is in the forefront with a hint of banana. No coconut! At least for me.

Really refreshing iced tea. Reminds me a bit of a funnel cake if it was pina colada/banana bread flavoured. The green base has a smokey nip that either adds bitterness or an alluring depth to the caramelized baked coconut/banana/pineapple goodness.

Oh, I wish I had a bag of this. Sounds delicious!