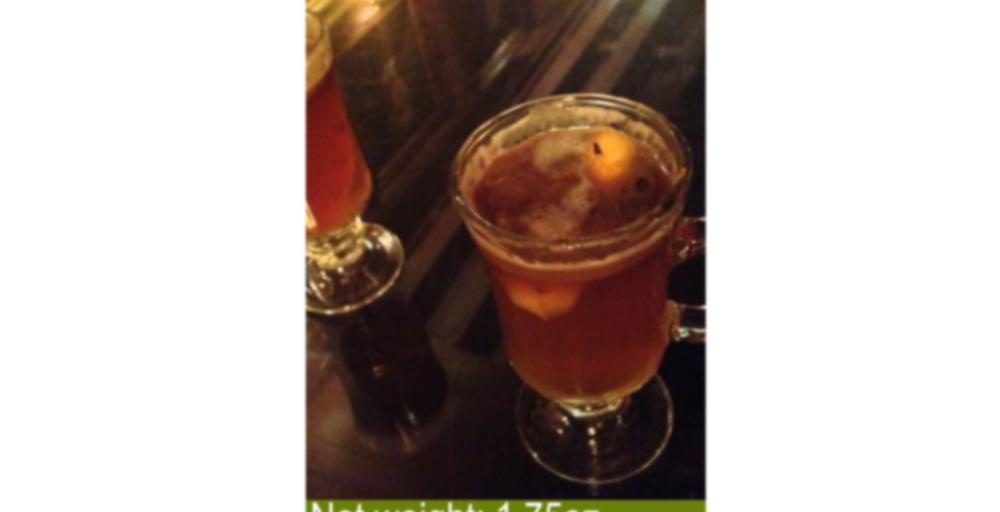 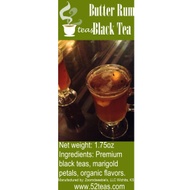 Butter Rum was always my favorite flavor of Lifesavers. I’m not really a fan of rum itself, but butter rum candy is the stuff dreams are made out of, and so is this tea.

It’s a blend of our premium black teas, marigold petals and organic rum, butter and (just a hint of) vanilla flavors. The vanilla is just a teeny bit to smooth out the other flavors. And smooth is exactly what this tea is. It’s delicious hot or iced. I hope you agree.

I should know better than to tear into a pack of 52teas without letting it cure, but the sheer excitement that I experienced when my latest order arrived was enough to make me fear my head might implode. The black base is solid and the Butter Rum flavor is complimentary in its flavorful sweetness. Kind of hmmm…butterscotchy? I’ve never had butter rum, nor have I ever tried butter rum lifesavers, so butterscotch is the closest thing that I’ve tried that I can compare it to. Me likes me butterscotch!

Speaking of butterscotch, have you seen that episode of How I Met Your Mother where Barney says that butterscotch is to Canadian women what chocolate is to American women? Are we really known for loving butterscotch so much? I’ve never heard that before. Perhaps that’s just made up for comedic effect? That show and it’s Canadian quips always crack me up. Gotta love Robin’s music video http://www.youtube.com/watch?v=IY_bhVSGKEg Hahaha! so ridiculous, it’s funny

This tea is good, and I’m certain that I’m going to like it even more as time passes… assuming that I can hold off on drinking it all so it can cure a little longer? It’s a good thing I ordered a variety of new (to me) 52teas to try so I can distract myself away from this one. I’ll definitely have to Hansel and Gretel myself away from this one by making a trail of other teas away from it…hey look! Blueberry Cream Cheese Danish! Mmm…that sounds delicious! …I think I need another mouth.

I better stop procrastinating and get back to cleaning and cooking. The designer is coming over this evening for the design kick off meeting, and the house is looking disheveled. I’m super excited though, and I don’t think it’s just the caffeine :D

I have never heard the Butterscotch thing either. Must be for comedic effect. Also I love the ending to that episode.

I had this bag since summertime and I barely touched it. I had tried one cup while camping, it was not good, so I left it on the shelf since. Its sister, the “butter brandy cake” was terrible. So terrible, in fact, that I …. Got rid of it. It was so chemical and awful. So there’s a few bucks I’ll never get back. I even tried airing it out, as someone suggested (suggestion was based on feedback and comments from here) and still no go.

Given this butter brandy cake experience I am sure nobody would blame me for fearfully avoiding this bag. Well, it seems I avoided it long enough for it to get to the point where it is ok tasting. Reading through notes here I see someone mentioning “curing” the tea. I’m assuming curing is kinda like airing it out?!?

I’m glad the bag is finally working because I’m out of all butter rum from DAVID and I’m running really low on SoHo blend from Harney, so now I have an entire bag of butter rum just in time for winter.

It still has a hint of something I don’t like but it really is just a hint, I can easily ignore it especially with a fixin’ of Demerara and vanilla creamer. Fixed just so it is indeed a good cup.

Used DAVID’s perfect spoon for 8 oz water that I allowed to cool to 204F after boiling. Just over two minutes. No astringency and good aroma.

So, for rum-flavored teas, you’re recommending DAVID’s and SoHo? Any others? I have a Jamaican friend amazed at the idea there’s such a thing as rum-flavored teas, and I’d love to introduce him to some of the better ones (having yet to try one myself).

MissB, DAVID’s Buttered Rum (organic) was one of the very first loose leaf teas I’ve tried so I suspect I’ll always remember how delicious it seemed to me. Later I explored more but I never forget my first loves. SoHo blend, interestingly enough is not a rum tea per se but to me the blend of chocolate and coconut gave it a similarity to rum notes. If you probably taste them side by side they are different. I’d be wrong to call soho a rum tea even though it tastes like one to me.

MissB I LOVE SoHo – not sure I would have thought rum – but for sure tasty.
I’m hoping that the banana rum pecan keemun that I concocted from Design a Tea is all that I’m anticipating it to be…

Ooh. Excellent! Excited to try these, AND to hear about your Design a Tea teas, Dexter!

Took this with a lump of sugar and a splash of cream. Mmmm made for a nice treat. The flavors are richer and very comforting. Yummy with chocolate ice cream :]

More catch up with my Christmas box. I will have to miss yesterdays tea though as it’s not vegetarian (which is a shame).

This one smells like rum and raisin ice cream, or even those chocolate rum ball sweets, very potent but so yummy. It also has a creaminess to it. Husband had a sniff without me telling him what it was and he loved it, also said rum and raisin.

Flavour wise it’s fairly light, buttery, smooth, sweet and with a naughty rum after taste. The blend is more subtle than the scent but offers what it says in the title ie butter and rum. This would make a perfect accompaniment to a slice of chocolate cake.

This one smells and tastes just like the butter rum lifesavers you get around Christmas time in those lifesaver books. Unfortunately, those ones have never been my favorite.

This one taste pretty much like most butter rum candy, or flavouring, not so much like a real hot buttered rum drink. You can taste the usual 52 teas black base underneath the rum flavour. It is fairly sweet on its own. There is also a creamy taste and feeling to the tea.

yes, that is the candy I was trying to think of that this tea tastes like!

Another tea from my amazing box from ifjuly.

I’m hit or miss with Frank’s blends – especially the black. I know, I know – lower water temp short steep. Tried that – still not getting much flavor from this one. Maybe I’m not really sure what it should taste like, but even having drank about 4 cups of it tonight, I still am unsure what it’s all about.

So far, this box has contained quite a few flavoured black teas. Many of them I’ve enjoyed quite a lot, but eventually the common base starts to numb these sweet teas out for me. Root Beer, Buttered Rum, Buttered Beer.. (OK, that last one isn’t in here but I have some in my stash). Anyways, I’ll admit to tiring of drinking them all concurrently.

My own personal grievances aside, this does smell a lot like spiced rum, with a very convincing candied butterscotch take on the flavour. It IS enjoyable, and I was also curious about this blend too when it came out. :)

I liked this tea quite a bit … even better than the lifesavers candy. To tell the truth, I’m not big on the Butter Rum flavored lifesavers, but, the idea of dropping a butter rum lifesaver into a cup of black tea … now that sounds yummy. (I’d also go for a Werther’s candy in my black tea.)

I know I’ve said it before, but I’m going to say it again. I love the changes that 52Teas made to it’s black tea base. Before, it was a bit harsh (depending upon what flavors it was blended with) and since the change … I’ve not had an issue with the harshness at all. And as I typed that, I couldn’t help but wonder how these flavors might taste with just a touch of Lapsang Souchong in the blend. A smoky Butter Rum. You could call it Grandpa’s Butter Rum! My grandpa didn’t smoke pipes or cigars, but, whenever I think of pipe smoke, I think of a grandpa-ish type dude.

Anyway … here, the black tea is bold and rich and flavorful … a good base for the flavoring of butter rum.

I love the vanilla in this tea, it gives the cup just the right amount of creaminess. The overall cup is smooth, rich, delicious and delightfully Butter Rummy.

My hubby is a huge butter rum fan—I have to go chase down Life Savers for his Christmas stocking every year. Getting harder to find!

oh yeah, I used to love love love me some buttered rum candy!

Every year, I have a tradition of getting my oldest daughter one of the “lifesavers” storybooks in her christmas stocking. And those usually have a roll of the butter rum lifesavers. They’re her favorite too.

On the eighth day of Christmas, 52 Teas gave to me…Butter Rum!

This is one I’ve long thought about picking up a pouch of. I never have, for some reason, so I’m glad I’m getting a chance to try it now. The first sip is wonderful — I can definitely taste rum (and it’s a pretty accurate flavouring, too), and then comes a smooth buttery sweetness that really rounds the whole thing out. This brews up pretty strong and dark, so I added a splash of milk. I wasn’t sure if that’d be odd at first, but it actually suits this tea quite well. Something about the creaminess, maybe.

Anyway, this is a pretty perfect winter tea. I think I’m going to enjoy a cup on Christmas Eve, and maybe another with Christmas pudding on the big day itself! I was hoping desparately that I wouldn’t be disappointed with this one, and I’m thankfully not. I might actually get around to buying a full bag after all!

Brewing and in the cup this really does smell like those lifesavers, so mission accomplished, Frank. It has a creaminess in the sip too that reminds me of them. Pretty good, might try steeping a smidge longer next time. Bet some milk would work nicely here.

Awe I love those life savers

I always did too, I think they were my favorite!