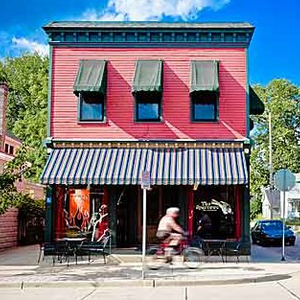 Friends pestered me a while to go and check this little cafe out. It does coffee and loose leaf tea, it also has a news stand feel, selling lots of magazines. My roommate and I were over on the east side and decided to check it out. pretty cool environment..Won’t lie there was a little bit of a ‘hipster’ feel, like you had to be cool to be there, but it wasn’t really offputting especially when we sat and watched all the types of people that came in and out of the shop that sunday afternoon. As for the teas, I had a nice oolong and they had a decent size selection of loose leaf teas. I thought it was pretty cool that they had IngenuiTEA brewers from Adagio’s for those who wanted to drink their tea inside the shop. My roommate had a chai, which she enjoyed aside from the mountain of cinnamon that was presented on top of it, haha, we will just hope that it was a slip of the hand on the barista’s part :) If you are in Grand Rapids def check it out, there aren’t any real tea shops in the city so this is a good alternative.

. A Victorian Tea Lady
no ratings yet
0 ratings

. The Seasoned Home
no ratings yet
0 ratings