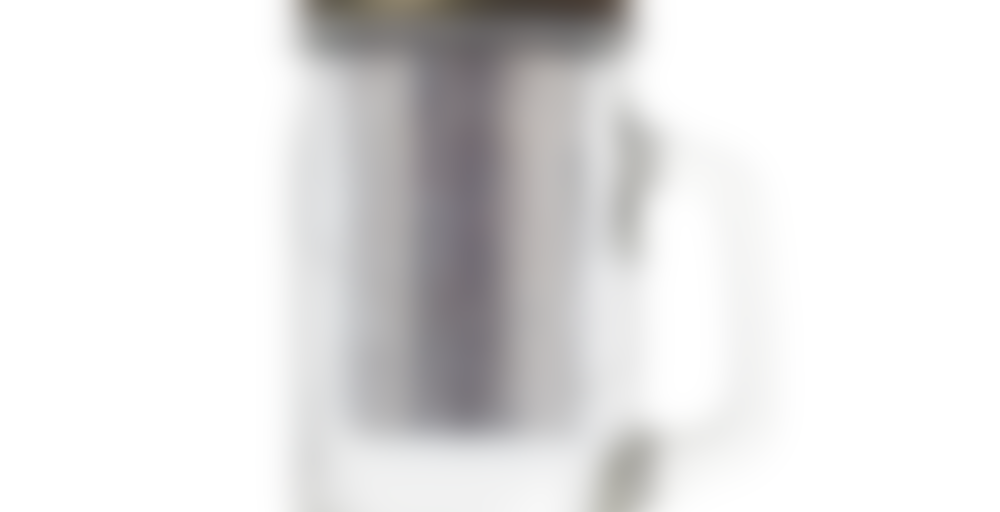 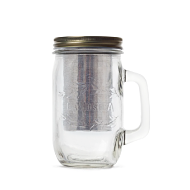 Want to add a little rustic charm to your tea routine?

This handsome glass mason jar is for you. It comes with a big, stainless steel infuser so you can brew your tea right in it. And with its comfortable glass handle and screw-on aluminum lid, you can take it with you everywhere you go. Trust us – it’s this season’s hottest accessory. Great for hot or iced tea! Designed in-house and made exclusively for DAVIDsTEA. (Capacity: 751ml/25oz)

Handwash only; do not microwave; avoid extreme changes in temperature; not safe for water over 98°C/208°F.

I figured I’d finally add the teaware I own that’s already in the database to my cupboard and post reviews or whatever. That seems like maybe a thing I should do. I admit, it does weird me out that it’ll get counted as part of my cupboard now, though.

Does that bother other people at all? When you tell people the number of teas in your cupboard do you just mentally keep track of what is and isn’t teaware and subtract that from your total? Am I just totally over thinking things? It’s probably that last one, right?

Anyway, as I’ve made sure to point out (because credit is due where credit is due) this was an amazing, unprompted and totally unexpected gift from that absolutely fucking amazing Keychange who was just too damn thoughtful for her own good. Being a gift, I really have no right to complain about it – but regardless (and also thankfully) there really is zero to complain about.

Visually, this is just BEAUTIFUL and it really lets you see and enjoy your tea (the first clear glass brewing mug/device/whatever you want to call it) I’ve owned. In addition to that, it has a massive brew basket which is just great for steeping (I feel like this will often be used for oolongs, now) and which I’ve already found handy for sipdowns and decreasing the quantity of tea I have lots of leaf for. A word of caution, however, you should probably know that the tea you’re making is one you like because you’re going to be drinking lots of it ;)

Well, that or don’t fill it to capacity.

But, speaking of capacity this is great! I often dislike that my timolinos are only 12 oz. (slightly more than the largest mugs in the house) because if I want to sit and drink something straight through a TV episode or movie I’m likely going to run out of something to drink. Not the case anymore! I can also seeing this being a benefit to road trips (thinking of the drive between Saskatoon and Regina) or long outings (though I haven’t yet tested how leak proof this is).

Since opening it, it practically hasn’t left my hands – except for now while it’s in the fridge. I’m currently cold brewing in it because it’s basically the perfect thing to cold brew in because A) it’s the right size can you say great for the summer and B) it’ll be so easy to just pull the strainer out instead of manually straining it. Normally that wouldn’t be a problem, but my nice strainer was left in Regina when I was there in January, so it’s been hectic straining my cold brews recently.

Just, overall I am very impressed.

Yours I Like This
19 likes
1 comments
Edit
keychange
Delete

I am so so so so happy you love it, roswell! and you can totally complain about it when/if you ever notice any problems—speaking of credit, I didn’t design it LOL (although honestly, whoever did is friggin incredible).

This new mug is the love of my life. Seriously, I’ve not used anything else since I got it. As a Southern girl living in Toronto, this behemoth is a dream come true. And it’s huge! Which is awesome, but I would not recommend trying a new tea in this because if you don’t like it, you’ve still got 25 ounces t drink XD. The infuser is just as big, which is great, but a touch hard to clean. It’s heavy and stable and looks great in my collection. I recommend it to everyone and anyone.

I hope to get it for the summer to cold steep smaller amounts of tea, rather than huge pitchers, for when I just want a few servings.

Actually, yeah, that’s a pretty good size for cold steeps since I sometimes find my 2L jug too much (and always feel obligated to fill it all the way up). Yet, I can’t help but associate mason jars with hipsters haha.

I like the idea of this, but the 25 oz thing makes me hesitate! I guess you’d probably run through more leaf this way because after drinking 25oz, you will NOT want to resteep and do it again! But for teas I won’t resteep anyways…. it could be really awesome!

Meh, I hardly ever resteep as is. I usually only resteep if someone else suggests it, for some (most) of my oolongs, and some whites. I dislike greens – so it’s weird enough when I crave one cup a green tea, two is just too much. I’m definitely burning through more leaf (easier sipdowns) this way, though.

Hmmm… You bring up some very good points. I may succumb to this tomorrow when I hit a DAVIDsTEA! (I’m buying 20g samples of tea or my sister in law who’s just getting started! So exciting!)

Do it, do iiiiiit. You won’t regret it. And eeee, isn’t it fun to bring someone into tea? My friends call me a “tea pusher” because I’ve done it so often.

Haha. And yes, it’s AWESOME to bring someone into tea, even if it’s for the very selfish reason that I want someone else to talk tea with.

I don’t usually allow glass things in our house. The small scar on my wife’s hand and seven stitches from a lamp give me more than enough reason. BUT mason jars are always an exception, and I am so glad that I made it for this mug. This thing is huge. The glass keeps your tea insulated and lets you see the gorgeous colours.

I’ll say the same as my wife, though – make sure you’re drinking something you like. And have ready access to the bathroom. Huge.

I do like the infuser, it’s smooth-sided and tea is less likely to get stuck in the holes, but it is a bit of a pain to wash because it is so very large. I love the little hinged handle on it, though, which means I don’t burn my fingers on a super-heater infuser.

Definitely would recommend. It’s pretty to look at, incredibly practical, and a surprisingly good price for the value.

De, do you know how many oz it contains? (Afraid to go look at it myself, don’t trust my fingers with the “add to cart” buttons lately)