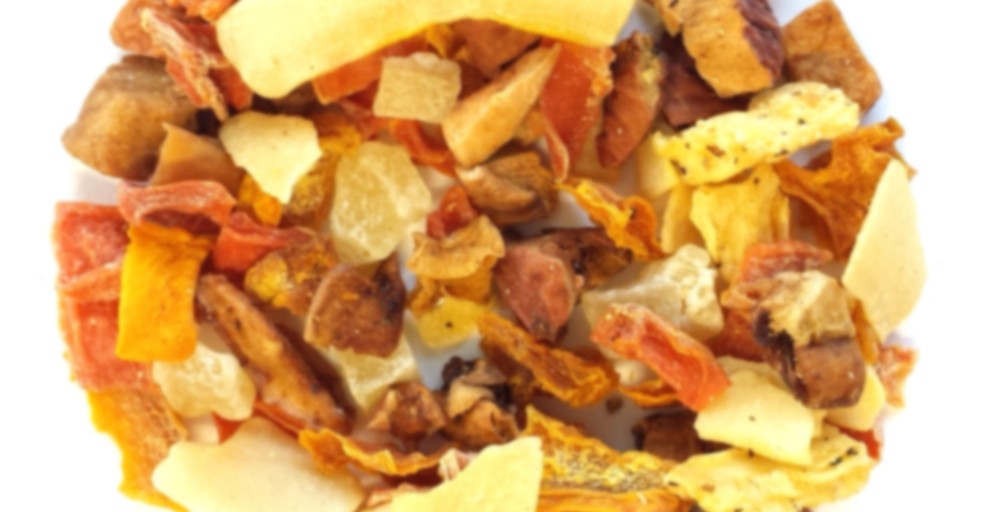 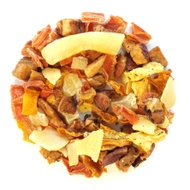 This sweet and mild combination of coconut and tropical fruits will transfer you to a tropical island.

June Wedding! Another something borrowed from the last Here’s Hoping Teabox (thanks tea-sipper for organizing and all that contributed!) and this is a fruit herbal that honestly I was just sniff-checking because I figured the coconut in it would be off. I was shocked that it didn’t have that acrid smell, because I’ve had coconut teas only around six months old go off, and this tea company doesn’t even sell tea anymore, only teaware, so I take that as a sign this has got to be a pretty old blend. Ah well, if it smells okay I’m willing to try it! I saved enough to do an iced tea, so that is how I prepared it. I was excited it included dry pumpkin, though we’ll see if any of that comes through in the tea itself.

The tea is quite naturally sweet, and very tasty. It has a very pina colada sort of taste, with the coconut flavor coming through very strongly, followed by pineapple, but more of a sweet, candied sort of pineapple, rather than a tangy, fruity pineapple. It almost feels a bit creamy, reminding me of the White Coconut Cream tea I tried not long ago, but I wonder if the high sweetness of the tea is just giving it a somewhat desserty appeal. As I expected, the carrot and pumpkin in the blend aren’t really lending anything in terms of flavor (and I was really hoping to get some pumpkin notes, as I am a pumpkinholic!) But this tea has a very strong and natural tasting sweet pina colada taste, cold brews great, and is very refreshing, and since I love pina colada but dislike when pinapple flavors taste too overbearing or artificial, I’d say this is probably the best pina colada flavored tea I’ve tried. It’s just a shame this is the only time I’ll ever get to try it. If ZenTea was still selling teas, I’d totally grab more of this!

Best pina colada tea? NICE. I know I’ve seen another tea shop with this exact blend… but I can’t remember who it was at the moment. If I remember, I’ll let you know.

I FOUND IT! I saw an e-mail from TeaDesire today and thought “hey, maybe they have that pineapple tea”: https://www.teadesire.com/collections/fruit-infusion/products/sweet-coco-dream

Also, that is probably the only reason I signed up for Tea Desire’s e-mail… to remember where that tea was sold. haha.

Ya, I found it myself just the other day too, even added it to the Steepster database just so I could add it to my Wishlist and not forget about it, heh. Unfortunately the shipping from Canada costs more than the tea itself… $20. Ouch. * sad face *

Of course you already found it. haha. Maybe one day they will have a free shipping sale? It’s interesting both Zen and Tea Desire are Canadian shops, so maybe other Canadian shops will have this? Sometimes shipping from Canada isn’t always bad… I remember Zen’s shipping was usually around $5.

If the shipping were only $5 I’d totally jump on it! Haven’t managed to find the blend elsewhere with more reasonable shipping, and I did look. Guess I’ll have to hope for a free shipping sale at some point, though I know a lot of places exclude international shipping from those.

This is yummy! Sweet and creamy with lots of pina colada flavor. Sad they sold out of it before I got to snag some in their clearance sale.

I ordered probably tooo much tea when browsing their clearance, couple that with all the spending I’ve been doing at DavidsTea, I need a tea spending break.

This tea though! I made it iced and it’s like sweet but unsweeted coconut juice! Recently I tried Coco Colada and really disliked it because it tasted like coconut water, which can sometimes have that strange slightly sour potassium? taste. This is what I was looking for when I tried that tea! There’s not much else to say about it though? It’s really yummy and refreshing, but it’s also at first taste pretty one dimensional. I’m pretty tired though, so maybe I’ll rewrite this review later

This tastes almost exactly like pina colada candy. I’m most familiar with this flavor from lifesavers and dum dum suckers. I’m a big fan of pina colada, so I’m enjoying this. I feel like it’s not something I would reach for often, but I would really enjoy it on occasion

I bought this tea after Tea Sipper recommended it. They were gaga over it, saying it was one of their favourite fruit blends, so how could I ignore such an endorsement?

Because this was an herbal tea that contained only chunks of fruit, I decided to get 50 grams instead of only 10 — 10 grams of such a dense, heavy tea would have been too little to experiment with.

Opening up the package, I was greeted with a colourful mix of dried chunks of carrot, pineapple, coconut, apple, and pumpkin. If you look closely at the picture, you can pick out the carrot and pumpkin pieces in particular, which are a sort of muted orange here amid the white flakes of coconut and the glassy chunks of candied pineapple.

Because the tea leaf was made of such thick chunks, I decided to brew this one with boiling water rather than cold water to give the pieces a chance to reconstitute properly. So I took half the package (about 27 grams), poured about 6 cups of cold water in the pitcher, let the pitcher sit on the counter for about half an hour, then put the whole thing in the fridge to cool for the rest of the day.

The resulting tea was a pale amber with a touch of cloudiness. Maybe it was the coconut that made it cloudy, or that there was so much dried fruit in general? It looked very promising.

However, the promise didn’t hold up to the taste. While I certainly did taste pineapple and coconut, to me the carrot and pumpkin flavours won out. They made the whole thing taste starchy and pale, rather than juicy and vibrant like I was expecting. I still have half the packet left, so I’ll need to see how it tastes when brewed with less water. Right now, though, this tea was a bit of a letdown.

WOW. Officially one of the best fruit herbals I’ve had. It is naturally sweet, and quite enjoyable. Three cups total. Coconut is dominant, but the other fruit pieces are incredibly wonderful. I dig the apples, the carrots, the pineapples, and the pumpkin. Even as this brews, it brings different variants of the awesome ingredients. I’m totally biased to coconut, so if you love coconut, this is yours. And $7.34 for 100g? Deal.

Aroma: sweet, nutty, tropical, tangy
Flavor: What is going on in my mouth?!?!?! It starts off smooth with an unknown, indescribable flavor and slowly makes its way to an amazing coconut and pineapple sensation! Pumpkin and carrot….what?! I can’t wrap my head around this tisane. Had to cold steep it because I dislike using hotel Keurigs. The water gets way to hot for me. I think this is better cold.

Last tea of the night for me; I’ve had a day of mixed tea drinking success so I picked something from the box that seemed like a really safe choice.

And I have to say, I know my palate pretty well ‘cause this is delightful! Mostly it’s a lot of sweet, tropical coconut just like advertised/promised. There’s a nice fruity undertone to it though: a little bit of pineapple and a little bit of apple? Maybe something just a touch extra, like a hint of mango? Whatever it is, it works. Actually, now that I’m thinking about it this reminds me a lot of all the elements I really enjoyed in DAVIDsTEA’s Tropicalia blend. All the flavours are kind of classic pairings: nothing out of the ordinary here. It’s the balance between them that sort of sets this apart though.

It’s a perfect way to cap off the night, though!

GCTTB
This tea tastes like toasted coconut with added creamy sweetness, like the coconut milk was added to the blend along with the meat. There’s a tropical fruit undertone that’s mostly pineapple and all tastiness. Excellent both hot and iced, this would make an excellent mixer for some kind of summer cocktail.

Succulent, juicy, tropical fruit magic! I absolutely MUST remove at least another cup of this gem before I pass the TTB on this weekend. This fruit blend tea has several different fruity pieces that make up it’s bulk. I taste primarily Coconut and pineapple with a creaminess that must come from the coconut. I didn’t taste any of the hibiscus which others have, but I will agree with them as to the pina colada-esque flavour! I am very sad now that when Zen tea had that special steepster sale I didn’t have the funds to take advantage of their generous offer. :(
Anyway, if you get the chance to try this and you enjoy pina coladas I cannot recommend this tea enough!!

So… what are your thoughts on trying this turned into a slushy ice? :)

I don’t think there is any hibiscus in this one… but I’m glad you love it. :D