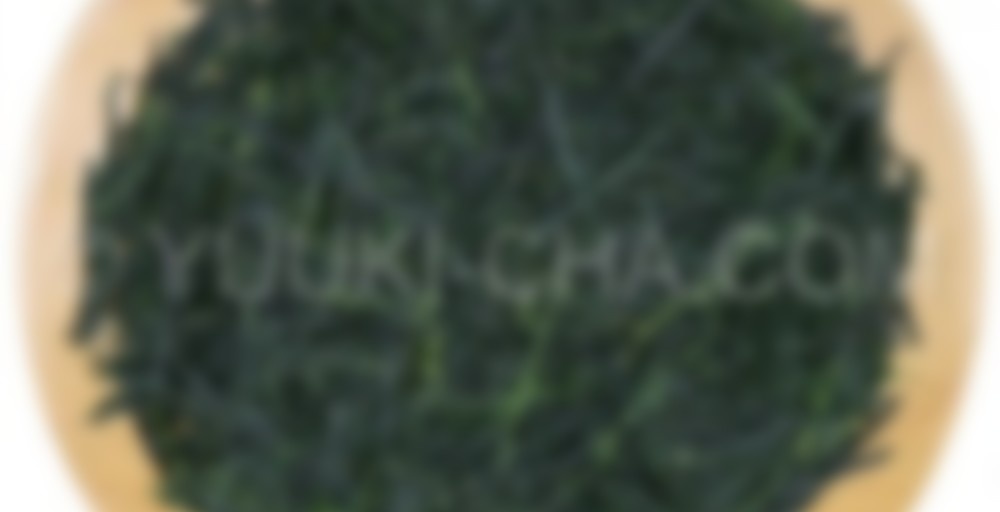 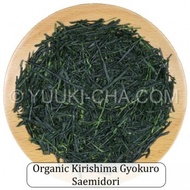 A fabulous organic gyokuro green tea that is light steamed (asamushi) and made from the excellent saemidori cultivar. It comes to us directly from Mr. Nishi’s organic tea gardens which are located in the misty mountains of Kirishima in Kagoshima!

Mr Nishi is a tea grower who manages many organic plantations in Kirishima, but the majority of tea leaves, of various grades and harvests, that his plantations cultivate are actually sold off to tea manufactures around Japan who process the leaves and then sell them on to any old reseller (Mr Nishi often has no idea who is selling his teas!). However, Mr Nishi of course always retains his very best teas of the year, and this is one of them which is honestly 100% self cultivated and self manufactured by Mr.Nishi in his factory in Kirishima and sent directly to us by him!

This particular organic gyokuro that Mr. Nishi has made this year has a lovely soft oceanic taste and deep aromas of the misty mountains. Naturally very good quality tea, and grown without the excessive chemical fertilizers and pesticides that non-organic gyokuro is made by.

This was an okay gyokuro. It has a nice but elusive umami flavor. You have to nail down the perfect brewing parameters which I’ve only managed to achieve a couple of times. Most of the time, it has a basic green tea flavor with savory asparagus and wheatgrass overtones. Compared to other gyokuros I’ve tried, it’s on the light side and not quite as rich and buttery. There’s a fresh oceanic aroma in the leaf which I was hoping would come through in the tea but didn’t.

While most quality gyokuros give 4-5 good steeps, this goes only half the distance leaving me feeling short changed. It also doesn’t have that nice transition from umami to grassy sencha flavor.

Those who read my tasting notes know that I often favor standard grade teas over their expensive counterparts and I’ll take a sencha any day over gyokuro. Yet for some odd reason, I keep giving gyokuro a chance. Somehow I’ve convinced myself that I just haven’t found the right one yet.

The tea soup is quite clear and pale green in color. Its sweet, mellow flavors were pretty straight forward and enjoyable, but there are other hidden flavors that can be picked up if the drinker sits quietly with the tea.

The light vegetal notes remind me of fresh young spinach from the garden, young fern, and alfalfa. Oceanic notes are reminiscent of roasted Korean nori. It just feels very clean and pure. The tea coats the tongue with a luxurious softness and subtle vibration as it goes down the throat, which I attribute to how well it was processed.

I haven’t had gyokuro for over a decade. Mainly due to it’s overly seaweed-like and umami-heavy flavor. I’ve definitely had pleasant oceanic notes in sencha, but the way these flavors are expressed in most gyokuro weren’t enjoyable and felt artificial to me. However, Yuuki-cha sells very reliably good green tea. Period. Thus, I thought I’d give gyokuro another try, especially since their Kirishima Gyokuro Saemidori was $13/50g at time of purchase. I wasn’t disappointed!

Nowadays, I find myself reaching for this tea more often than my young sheng pu’er. In all it’s subtly and softness, I find I don’t have to pay attention to this tea to enjoy it. It’s perfect for work as well as relaxation.