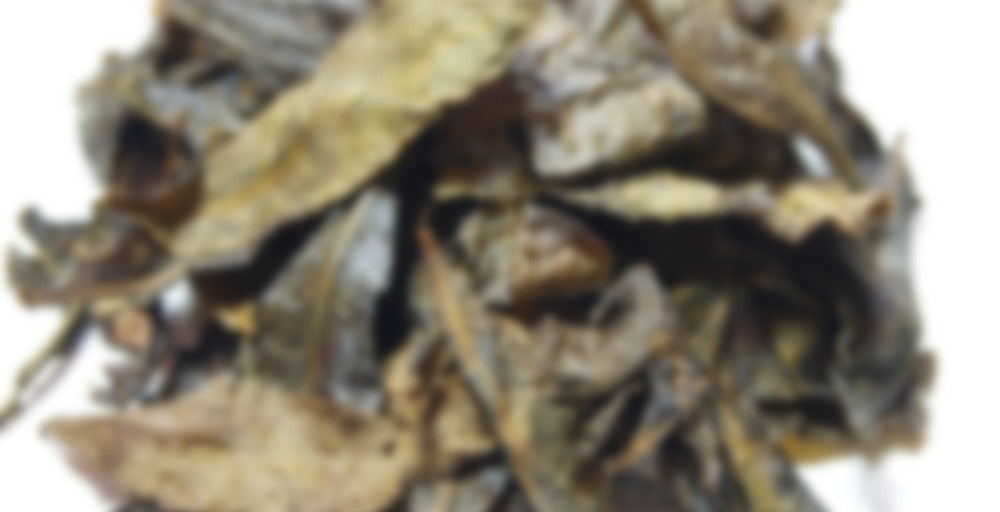 The leaves used for awa bancha tea are harvested in summer, July and August usually, by striping the leaves off a branch by hand.

This tea is produced by Bancha Specialty Shop Furyu, which was established in 2010 by aspiring tea master Nobuhiko Ikematsu, who works directly with farmers in Kurume City, Fukuoka, to develop delicious bancha teas. He is also a specialist gathering rare bancha teas from around Japan.

June Wedding! This is a newer tea, which I bought just last month during Yunomi’s Golden Week free shipping sale. I was curious about it mainly because it had so many… negative/odd reviews on Steepster, which made me want to taste it for myself!

The tea leaves are huge, and definitely look reminescent of autumn leaves, because they are so large and brown. They really fill out after infusion, too! The dry leaf smells strongly of fermented sour pickles, but I love pickles, and since most of the reviews described the tea as having a pickle sort of flavor, I figured I probably would like this okay.

Brewed up, I definitely find this to have a pickle flavor. I first sampled it on vacation with my friend, and he agreed; I found it more agreeable than he did. In addition to the sort of tart, pickle top note, there is that sea salt/brine sort of taste I get from some green teas, though it is lacking the seaweed note that usually accompanies that particular flavor in those green teas.

Overall, the tea comes off a bit more on the savory side, so I tried ochazuke (white rice submerged in green tea) with this tea. I wasn’t too impressed with my first try of the Japanese dish, but I think that was mostly because the texture was too much like porridge, which is just too mushy for my tastes. I’m still glad I tried it, though.

I’m a bit middle-of-the-road with this one; I don’t dislike it, because I do like that tart-pickly taste, but it also isn’t a flavor I’d particularly feel in the mood for in tea very often, so even though I only have an ounce of leaf, it’ll probably take a while for me to use it up. I can tell this will very much be something where I’d have to be in the right mood.

I shouldn’t have read the notes prior to trying this one. Particularly not Liquid Proust’s, because now I’m thinking of dead human bodies that might have turned into plants, and it’s all suddenly very Lovecraftian.

The leaves are something different. They’re huge for one, and look like leaves you might find outside on the ground in autumn. They certainly don’t resemble any tea I’ve ever tried. The scent, though, is truly awful. It’s very vinegary, and while I can see the comparisons to pickles and olives, mostly I’m thinking embalming fluid. That’s all LP’s fault, I’m sure.

Now that I’ve filled my mind with such comparisons, I know I’m going to have a hard time tasting pleasant things. It’s not terrible, but it’s not something I’d want to drink routinely (or even ever again…) It’s very savoury, which is fine, but it mostly tastes like a combination of brine and vinegar with an undertone of decay.

I’m going to say I recommend this one, because I think everyone should have this experience at least once in their lives. It’s unique.

I’ve been looking forward to this one! The leaves are latge whole, and brittle. They have a mottled appearance and honestly look more like something you would find outside on the ground than processed tea. The smell is tart and very much like umeboshi. I used the second set of brewing parameters on the package.

The tea isnt sour but does have just a hint of tartness. The umeboshi flavor is there and a bit of a briney taste. It’s defiantly a savory tea, and goes down smooth. I grew a shiso plant once and preserved the leaves in salt, and this tastes much like those leaves once they were rinsed. I got two good steps out of this. When I first saw this added to the group buy I assumed this was a Japanese take on the shou pu erh, but instead this tastes very much like an anaerobic lactic acid fermentation.

This was about the most unique tea I’ve gotten recently. I can see myself getting this again just to have occasionally. This would be lovely in ochazuke. I might pick up some rice and use the rest of my sample to make it.

Had a friend try this. Their verdict: olives!

Tried as part of Dark Matter 2016. I will further preface this review by saying that I hate pickles.

This tea, as expected, smelled like pickles. This, I thought, was not a good thing. I was correct. Along with the vinegary pickle note, there was also something else there in the aroma that in my notes I struggled to describe – attempts included “rubber” and “yeasty?” The smell of the wet leaves was a bit different – more of wet autumn leaves covering a pile of pickles. The taste was sharp, but not bitter – quite sour. It did also have woody notes and some of that strange mystery flavor. I noticed a sweet finish as well. I will admit this is the first tea I gave up on very quickly – I got through three steeps, which all tasted rather similar. Made my stomach feel kind of upset and was not very good in my opinion.

I used 3.5 in a 100mL gaiwan with 190 degree water. With most other teas, I would give them a try with different parameters, but I don’t think i have it in me for this one. For the record, I made sure to drink it with my pickle-loving fiance (she’ll sometimes drink pickle juice straight from the jar – yuck), who also did not enjoy it.

Glad I got the opportunity to try something like this with just a 5g sample. Whatever else it is, it’s certainly interesting.

This’ll be the next tea that I’ll review!

It’s my time to try the infamous pickle tea. The vinegar smell was obvious upon opening the bag. I was worried it would be overpowering in the cup, but with a steep on the shorter side I found it to be somewhat enjoyable. I don’t think I’d buy more of this tea, but I’ve enjoyed the few cups I had, possibly more due to it’s uniqueness than a particularly pleasant taste.

Have to disagree with LiquidProust on this one, I and three co-workers smelled it and we all thought it smelled (lightly) of dill pickles—which is definitely strange and different but not an awful smell.

We brewed three cups western style, 1 minute, 2 minute, 3 minutes (starting with 3g and adding 1g to each redrew for a total of 5g).

Brewed, it tastes like it smelled, hot tea with a bit of pickle. I love pickles and all things sour so it hit the spot for me. My two coworkers also enjoyed their cups.

This is one I’d throw some in again if I were ordering something else from Yunomi but probably wouldn’t do an order just for it.

I didn’t brew (or boil according to instructions) this one yet, but I don’t think it smells like pickles at all! I actually make fermented dill pickles every summer, and this is not like them.

But then I also can totally see someone associate this one with pickles. To me this one has more of a chemical smell of sorts… maybe from the paint family, not really sure. Looking forward to taste it though!

I think that LP may have been referring to japanese pickled plums.. which are these little red smooshy plum balls that pickled with a salty sour brine. I opened this package and immediately thought of them, the scent made my mouth water immediately from the scent association. hehe! I considered brewing this tonight, but settled on the Life in Teacup Hei Cha

Umeboshi? I thought they were actually apricots, but whatever… I don’t remember what they smell like unfortunately. I might need to get some to refresh my memory! :)

Umeboshis are preserved plums and good for nausea and digestion. Back in the early 70s, a high school friend and her husband studied macrobiotics with Michio Kushiin Boston and introduced me to eating an umeboshi (or a tiny spoonful of umeboshi paste) after a big, heavy meal. They are definitely an acquired taste…

This was probably the worst smelling tea I’ve had in awhile; reminded me of a dead tree that was once a human but turned into a plant and then died a plant.

While it may not be that strong and what not, but the smell… what the heck?

Imagine a green tea has gone sour but vegetable sour…
I suggest Toss Bancha, I bought me a nice amount of it from YUNOMI because it’s like a roasted oolong but lighter

On my phone.. I’ll fix this listing tomorrow. Furyu is the maker not the tea

The single best description ever! LOL