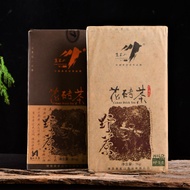 Wild Hei Cha from Yun Tai Mountains. This is the original An Hua tea varietal that has grown in the mountains of Gao Jia Shan and Yun Tai Shan for centuries (maybe longer). This is part of Gao Jia Shan’s Wild Tea Series.

Hua Zhuan 花砖 is a unique An Hua style of tea that is based on Qian Liang Tea. It’s a blend of grade 2 and 3 sized leaves (just like Qian Liang). It differs from Qian Liang tea in it’s shape only. It is different from Fu Brick in that it does not have golden flowers 金花. It is quite similar to “Hei Zhuan” 黑砖, but uses less coarse/large leaves in its blend (Hei Zhuan blend is the coarser). Keep in mind that the size/grade of leaves influences the taste, but it should not be equated with “quality”. For example, although all Hua Zhuan are blended from a similar ratio of leaf grades/sizes, this offering (being from wild high altitude tea trees picked in spring), will outshine another Hua Zhuan that was (for example) harvested from plantation bushes during the second spring flush. Age is another factor, but we won’t get into that!

Each Brick is 1 Kilogram. If you order anything other than a whole brick you will get pieces.