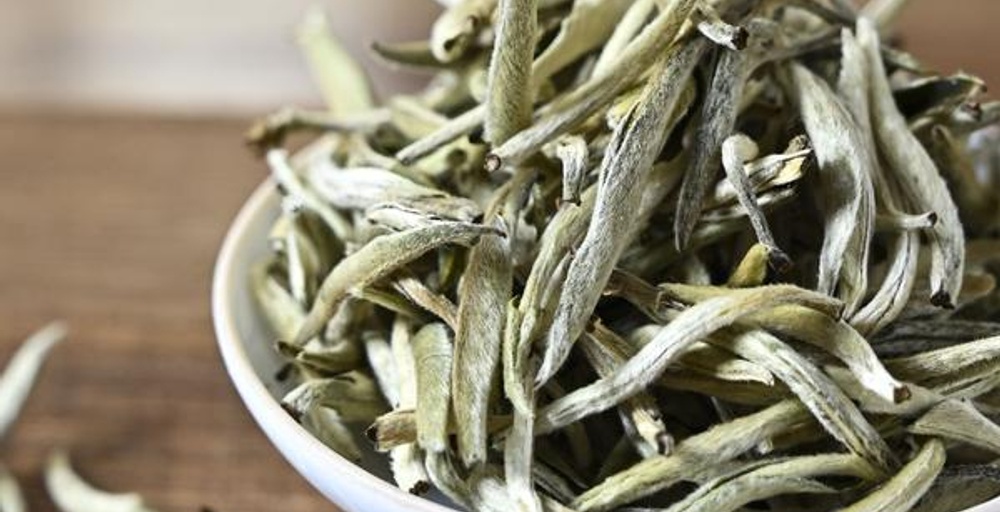 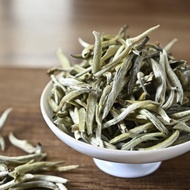 by Yunnan Sourcing
85
You

The “Da Bai Hao” varietal is a natural hybrid of Assamica that is unique to the Jinggu area of Simao (in Yunnan).

Silver Needles White Tea (aka Bai Hao Yin Zhen) is a special tea where only the tender shoots (the bud) are picked, lightly wilted, pan-fried briefly at low temperature and then allowed to dry naturally (sometimes with the help of fans). This relatively unadulterated style of processing lends the Silver Needle tea a fruity and sweet taste and aroma that even with a year or two of age will still taste thick, viscous and full in the mouth.

This was one of my more recent sipdowns. I think I finished what I had of this tea a little less than two weeks ago. Even though white tea, in general, is very hit or miss for me, I almost always end up loving the Jinggu white teas that I try. As a matter of fact, I do not recall ever trying a bad one. Jinggu silver needle, in particular, is one of my favorite white teas. I always love the regular Jinggu silver needle white tea that Yunnan Sourcing stocks, so I jumped at the opportunity to snag one of their higher grade offerings. Like the lower grade offering I recently reviewed, I found this to be an exceptional tea.

This was a ridiculously complex and satisfying Yunnan white tea. One thing I especially appreciated about this tea was that it so clearly built on what its lower grade sibling had to offer. A lot of the aromas and flavors it displayed were similar, yet they often had more depth. In comparison, this was a much richer and somewhat more nuanced tea with a few more challenging characteristics, though it was not as drinkable and easygoing as the lower grade offering. Overall, this was a great tea, but I do not think it would be suitable for less experienced drinkers.

Jinggu teas, we’ve been all miss and no hit until now. The liquor color is beautiful like other silver needle whites. It’s like women’s ‘champagne’ hair dye in a box. This one isn’t too flat in flavor for me but it is very subtle beyond the more pronounced aromas and flavors of linens, lychee?, nectar, minerals, marshmallow and vanilla. Perhaps hints of green apple candy and sugarcane; there’s something green about this tea but I can’t place it exactly. There’s also a nice lemony tartness to the the thin and soft body to keep things interesting. Later steeps move more along the lines of dandelion and hay. It’s really quite refreshing but not a whole lot to keep me engaged.

Oh, and by the way, have you ever smelled a Cabbage Patch Kid? Back in the 80s they had a distinct smell. That’s the taste of this tea to a tee. The color of hair dye and the taste of the smell of dolls. I may not be doing any favors by describing it thusly but if you know the smell, you’ll know what I mean :)

Addendum 1: The body of the tea really comes out with western steeping. It’s thick and coating followed by an awesome mineral-induced salivation and tongue tingling after the swallow. This tea has a wonderful cleanliness to it. Recommending it on the basis that it offers something different from other silver needles.

Addendum 2: When allowed to cool completely, the flavor reminds me of violet pastilles: that sweet sugar taste with purple florals and very slight bitterness. I also find it to be a body cooling tea versus the warming quality of other silver needles.

Bumping up the rating to 83+ Interesting tea :)

I quite like this Silver Needle, but it has been 4 years since I ordered the last one. The 2022 harvest is as good as I hoped it would be.

The aromas are complex, with notes of white wine, dry grass, leather, and wood at first; and hints of honey, rocks, lavender, ale, bitter melon, and licorice throughout the session.

The tea is light and elegant in the first two steeps, while the rest of them give rise to a much more robust brew. First one has a broad sweetness that is not overpowering, as well as flavours of dry grass, cucumber, and nectar. From the infusion, the tea is more bitter with a touch of smoke/ash and a strong aftertaste that reminds me of semi-aged sheng.

Throughout, the mouthfeel is very smooth, almost like a session IPA.

I can’t remember the last time a white tea impressed me as much as this one did. Most of the ones I’ve tried recently were pretty forgettable, either bland or tasted like dry autumn leaves. But this Silver Needle tea has such a sublime flavor, layered and nuanced without any of the earthiness or barnyard funk of other white teas. The dry leaves have a pleasant, inviting aroma of linen, dandelions, lavender, and hay. The flavor of the brewed tea is delicate and refined. It has a soft texture and undertones of cotton, cream, vanilla, and marshmallow along with a touch of nutmeg and green apple. A slight hay-like earthiness creeped in later as it continued steeping but nothing off-putting.

It was bedtime so I steeped this grandpa style with just a smattering of leaves in an 8oz glass. Water temperature was 175 F to start and then I topped off twice with boiling water. I used to brew whites at low temperatures around 160 F, but hotter water brings out a lot more character. For the price it’s an incredible value and I’m looking forward to seeing how this tea ages.

I absolutely love Jinggu silver needles. I have this one in storage and need to try it pretty soon.