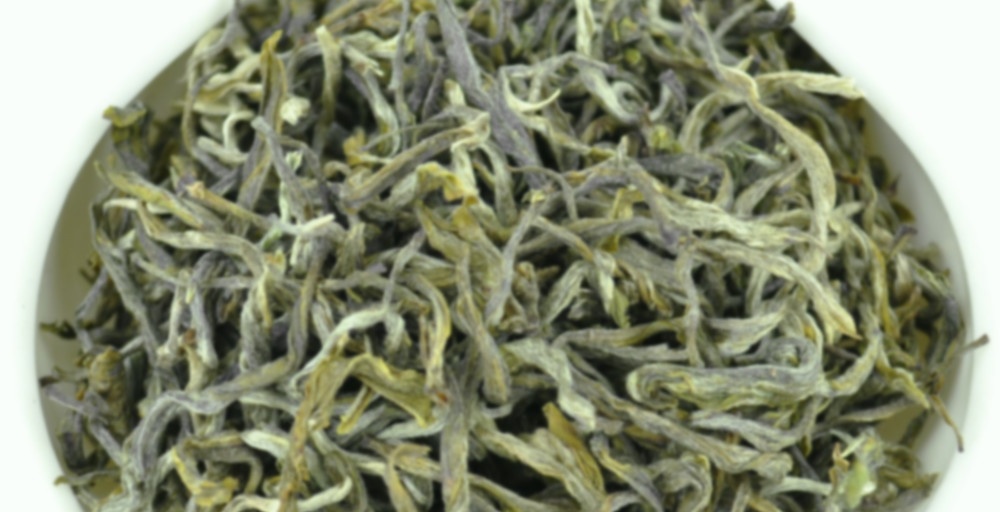 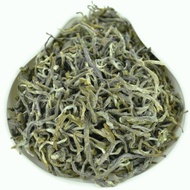 This lovely high mountain green tea from Wu Liang mountain of Simao is organically grown, but is no longer certified! “Mao Feng” is a high grade of Yunnan Large Leaf varietal green tea that is picked when just a few days old. Mao Feng is picked as one leaf and one bud and is covered in downy hairs. The taste is more mild than the “Zhen Mei” with more floral and fruit notes. The after-taste and feeling is protracted and pleasant!

Another of the 2017 Chinese green teas I have been working toward finishing, I am down to my last three grams of this tea and feel comfortable posting a review here. With regard to Yunnan green teas, I am often a huge fan of the teas offered by Yunnan Sourcing as I feel they offer tremendous quality at a ridiculously competitive price point. Sometimes, however, I find a tea that misses the mark. This ended up being one of those teas for me.

Prior to the rinse, the dry tea leaves emitted aromas of hay, nuts, malt, and smoke. After the rinse, I found emerging aromas of cut grass and honey balanced by some indistinct floral touches. The first proper infusion then introduced aromas of straw, bamboo, and sugarcane to the bouquet. When I really pushed myself, I could even find some vague pear and lychee-like scents in the background. In the mouth, the liquor initially offered mild notes of hay, grass, straw, and malt backed by hints of bamboo. Subsequent infusions brought out the sugarcane, smoke, pear, honey, and lychee on the palate. The vague floral tones morphed into more pronounced notes of honeysuckle, orange blossom, and squash blossom. The previously indistinct nutty quality began to remind me much more of chestnut. New notes of cream, butter, tangerine, lettuce, corn husk, peach, and minerals also emerged. The later infusions mostly offered thin, superficial notes of minerals, hay, grass, and malt, though I could occasionally find traces of butter, cream, and corn husk lurking in the background.

This was such a temperamental tea. It started off largely bland and boring, offered a sudden wallop of sweet, floral, and fruity flavors, and then faded ridiculously quickly. I was grasping at just about any and every aroma and flavor component I could find by about the 40-50 second mark. While this tea offered a lot, it did not do so for any length of time. Trying it at a higher temperature did not improve it. That only muted the tea’s most unique and appealing qualities while increasing the astringency. Trying to brew it Western didn’t improve it either. All in all, this tea was appealing and enjoyable, but only for a very short span of time. I can only recommend it with reservations because of that.

A classic green tea of honeysuckle, chestnut and hay. Developing from hay and honeysuckle to a young tender chestnut with each steep. Very enjoyable and upbeat. A few stems and a variety of leaf quality gives this tea a low to medium quality.

PICKING AND PROCESSING
One leaf, one bud with downy hairs.

DRY LEAF APPEARANCE
Medium, curled, moss green with accents of white sage. Smooth downy hairs that cling to some of the tea. A few clumps, a fair amount of broken leaves and a few leafs in each portion appeared to have over oxidized and have a brown/red hue.

WET LEAF AROMAS
Hay and Honey Suckle come through strong and as you continue to steep the chestnut begins to layer within.

AROMA (BREATHING OUT AFTER A DRINKING)
Honey suckle and hay