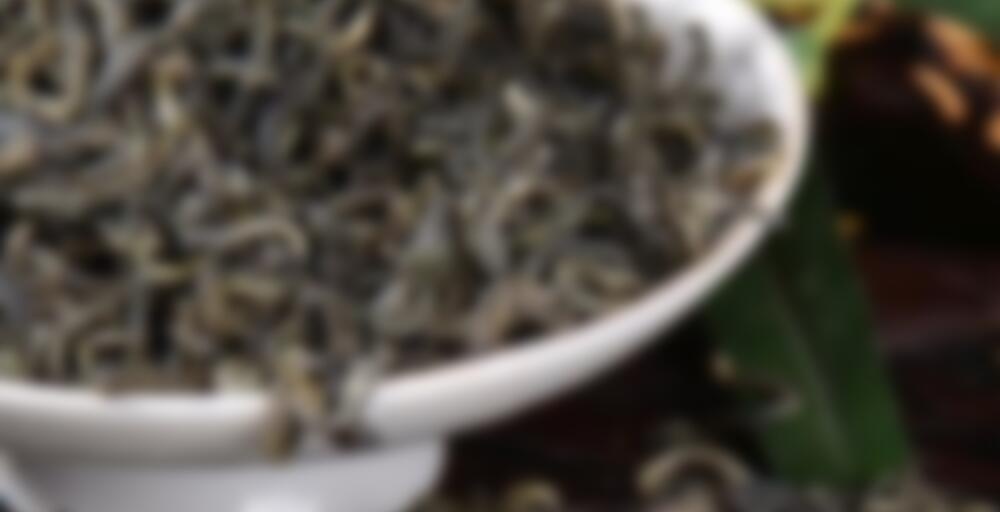 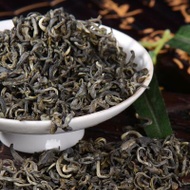 Hui Long Zhai lies in the western part of the county of Teng Chong (Bao Shan Prefecture), a mountainous region with peaks as high as 3000 meters bordering Myanmar. Relatively cool weather and high altitude conditions makes this one of the latest picked “first flush” teas in Yunnan, it is picked in the late part of April and in September. Buds and leaves are picked together just as they sprout and are then wok-fired by hand for a very short time but at a high temperature. The result is a tea with longer shelf life, and more importantly a high level of aroma when brewed! This tea is nutty with a fast huigan, but is a little more bitter and stimulating than Simao area green teas! My personal new favorite green tea! A good choice for a morning wake up brew or a brief departure from raw pu-erh!

Since I am currently off work due to a copperhead bite, I have little else to do but keep posting some of these backlogged reviews. It’s crazy to think that I have lived in an area with a large population of venomous snakes for over three decades and never had this happen to me. My residence is literally sandwiched between a forest and a hayfield, and I work outdoors, but no, I have to step on a young one barefoot in my parents’ driveway while watching their cats play-stalk the deer that invade the yard to eat daylilies every evening. Talk about shitty luck. Now I’m stuck at my parents’ house and can’t walk. With any luck I can go home tomorrow, but I probably can’t go back to work until next week at the earliest. That out of the way, this was the last of the spring 2017 Yunnan Sourcing green teas I got around to trying, finishing the last of my pouch sometime around mid-late June. I found it to be a straightforward, but very rewarding tea, and one that kept ridiculously well in storage.

Prior to the rinse, the dry tea leaves emitted aromas of hay, grass, malt, chestnut, and lemon zest. After the rinse, I detected a slight smoke aroma and a new aroma of corn husk. The first infusion then introduced a roasted peanut aroma. In the mouth, I detected notes of roasted peanut, roasted chestnut, malt, grass, hay, lemon zest, and corn husk that were underscored by a slight smokiness and a hint of sugarcane sweetness that became most apparent on the swallow. Subsequent infusions revealed hints of sour plum and spinach on the nose along with a stronger lemon zest aroma. New notes of sour plum, spinach, minerals, seaweed, lettuce, and lime appeared in the mouth. The final few infusions emphasized lingering mineral, lettuce, lemon zest, grass, malt, and corn husk notes that were balanced somewhat by hints of roasted chestnut and sugarcane.

This was a very nice and very easy-drinking green tea. It had the typical Yunnan green tea profile, which I love, though some folks seem to not be as impressed by it. As I continued to experiment with this tea, I also found it to be very adaptable, a perfect green tea for those who like to experiment with their brewing methods. Though this tea was not quite as complex as some of the other Yunnan Sourcing green teas I have tried, it was still an excellent offering. I could see it making a fantastic daily drinker or a perfect introduction to Yunnan green teas.

Best wishes for a quick recovery, eastkyteaguy! At least the rattlers out here give you a warning most of the time. The one time one didn’t, it was a baby. Those snekky bastards.

You make this Yunnan green sound worth a try. Since I just placed my last YS order of the year, I’ll have to try this fresh in 2019.

We have timber rattlers here, but they’re shy snakes and easily frightened. You don’t see them often. Copperheads, on the other hand, are everywhere. They’re lethargic by nature, but also easily threatened and provoked, frequently striking very rapidly and aggressively. The venom is fairly weak, and I got lucky, since I was struck on the side of my right big toe with only one fang breaking the skin. It was a glancing blow, but it still hurt like hell. My foot and lower leg are swollen and bruised. It will be at least two weeks before I can walk normally.

Hope you can heal quick! We have the same deer problem it seems.

Juveniles are the worst! I would have freaked! Prayers for a quick recovery.

Ouch, that snakebite sounds painful. Wishing you a speedy recovery.

This is my favorite green from YS and this year’s seems a bit more delicate than last year’s harvest. Less of your typical apricot; more sweet peach blossom in the aroma. There are more crisp, savory notes, roasted vegetal notes that feels more nuanced on the palate. These early to mid-steeps remind me more of a mountain-sourced Japanese sencha.

As with last year’s harvest, this tea can steep for a long time and will continue to release very pleasant flavors and aromas until the end.

There is artistry in these leaves. They are quite stout, spindly, and veiny, which reminds me more of leaves from older bushes. Gorgeous range of jungle greens that are pleasing to look at in my off-white shiboridashi.