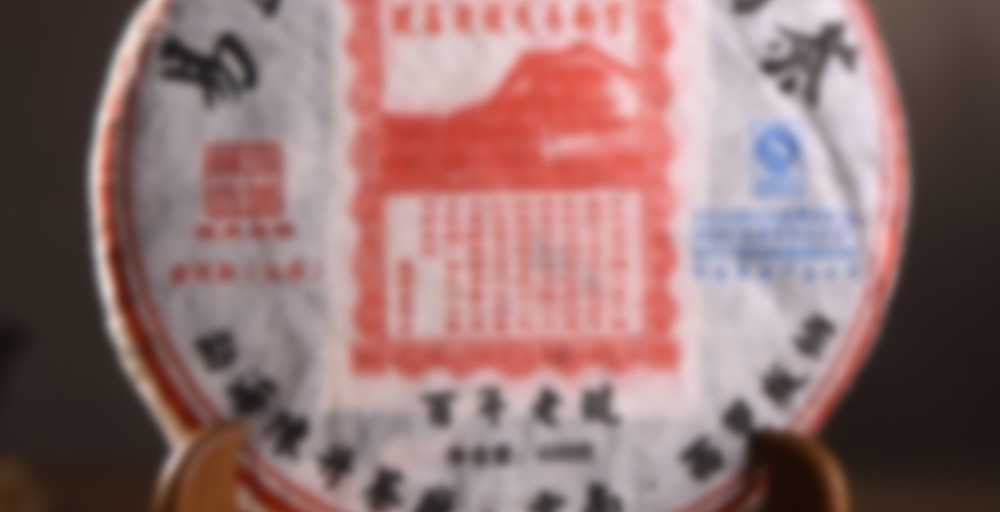 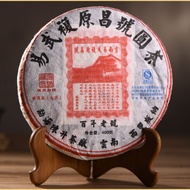 Chen Sheng Hao is a brand of Pu-erh that was started in 2008 by Mr. Chen Sheng He, a long time tea drinker and Guangdong native. In 2008 he signed a contract with more than 100 Lao Ban Zhang villagers for exclusive rights to their harvest. It was after this that Chen Sheng Hao brand pu-erh became known and soon after he began to produce teas from Yi Wu, Naka, Nan Nuo and Bu Lang as well.

The tea has been stored in Guangdong since 2009 and the hot and humid storage has helped it along by transforming it’s bitter and astringent character into something rich and complex. Instead of just theorizing about how Cheng Sheng Hao will age, why not try this and get to know just how wonderfully these cakes will age!

I’ve enjoyed teas stored in Guangdong and this sample was no exception.

Yiwu honey with a slight bitterness.

The price of the 400g cake is up there but some might say a fair price per gram for decent Yiwu.

I love this sheng so much that I have officially purchased my first full bing! I’ve never explored aging tea at home before, and I’m not sure if I really wan’t to become a collector who lives the whole lifestyle. All I know is that I just can’t get over how complex and delicious the flavours of this tea are, and I think it would be fun to watch it evolve over a couple years as a little project.
- – -
I always brew this tea gong-fu style. I think when I first purchased a sample I used boiling water which was a mistake as it helped the astringent and bitter notes to shine rather than the more desirable ones. For this tealog entry I’ve used water that’s 95°c which seems to be the sweet spot. 20 second rinse followed by a 20 second first brew and we’re off!

The first thing I notice is how sweet, fruity, and leathery the leaves smell after waking up. The shift in aroma between the dried and wet leaves is stark, the dry material smells extremely grassy in comparison. The taste of the tea itself has notes of cherry, sweetgrass, and a soft leathery/camphor which all work well together to create rich flavour that ends with some desirable bitterness. The mouth feel is great, creamy and silky on the tongue and roof of the mouth (very similar to a milk oolong). The liquor is not very thick despite the creaminess which is an odd contrast. I also salivate a bit before that nice astringency takes its place.

While the flavours may be nothing terribly unique when individually compared with other pu-erhs, the combination and balance just makes me melt with happiness. My whole body relaxes and my mind calms down, sometimes I even feel tea drunk with some euphoria and caffeine. Excellent qi. These are the feelings I chase with tea and I’m just happy to have found one that resonates with me on this level.

First tasting of the day is Fu Yuan Chang Raw cake from Yunnan sourcing and the third item from the monthly raw puerh club. This tea is lightly aged at about 8 years old. I really like tea at this point, age has taken off some of the rough bitter edges, but it hasnt quite gone all the way into deep earthy tones yet.

I started this by doing a wash, there was a tiny bit of particulate but it seemed a single wash enough to clean the leaves and then get them to open up. I tasted and smelled the wash and it was vegetal, astringent and gave off a strong green tea aroma. The liquor was a pale golden color, not at all surprising, showing a bit of age but still keeping the young raw characteristics.

The first infusion darkened slightly and mellowed as well, bringing out some honey, grass, hay, umami and sweet flavors and aroma. There was a slight bitterness and astringency as well, but it was very subdued. It smoothed out alot in the first infusion.

The second infusion got some more vegetal and hay aromas as well as a bit more honey and sweetness. It has a nice mouthfeel as well now as the leaves are opening up a bit more. The grass and hay are still there as well, it seems to be blending a bit better now with the flavors mixing more completely.

The third infusion was the best, a bit more bitter, but the rest of the flavors popping out more strongly. It was also the most complex, with some of the flavors and aroma’s subtle and I couldnt quite get them all.

The tea seems to have some staying power and I figure I will get at least 10 infusions from it. As is normal with pu’erh it seems to peak around 3rd or 4th infusion and then slowly come down from there. The leaves are now fully opened up and the tea was at its darkest in the third infusion. A medium golden color. The fourth was almost but not quite as dark , even though I steeped it a bit longer.

I highly recommend this tea if you like the in between stages, the place between a young and an aged raw. I happen to love it at this point, as the tea still has some bite, but has lost some of that young bitter astringency.