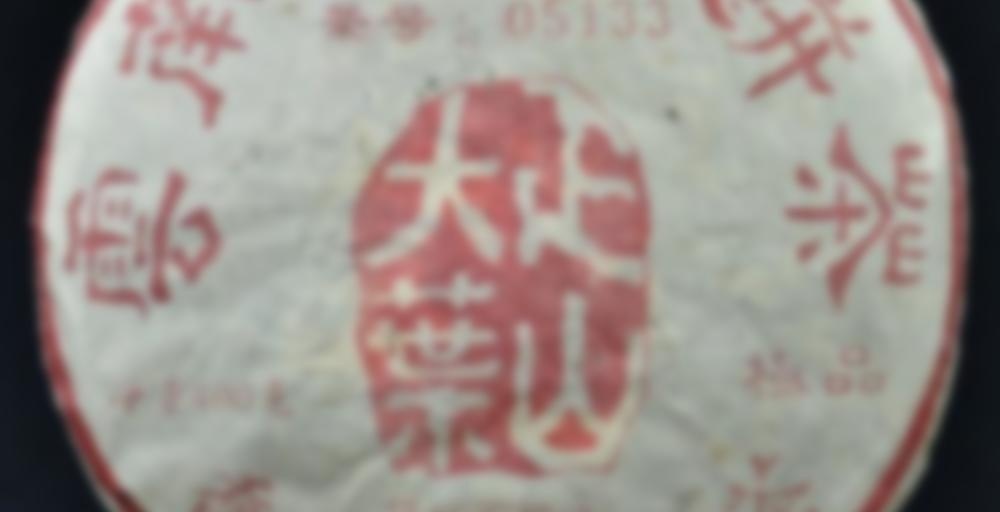 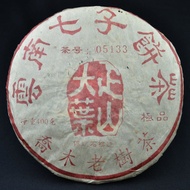 This was produced by a small tea factory in the Mengku area from Spring 2005 tea leaves from Xiao Hu Sai area of Mengku county in Lincang. The tea was stone pressed and compression is medium to light. The leaves are tippy first pluck of spring and their integrity has been well preserved thanks to the stone compression.

The tea has been stored in Guangdong in a relatively dry storage condition and as such the complexity of the tea has been respectfully transformed. Nice floral, fruit and camphor tones in this thick well aged tea!

Boychik kindly sent me a sample of this tea together with a bunch of teas I bought from her, and I drank it today as I was craving some aged sheng. I definitely enjoyed it and found it to be quite easy to drink with no noticeable off notes. It ranks above average as far as the semi-aged sheng I’ve tried thus far goes.

The taste is very smooth and somewhat herbaceous (pine) and fruity, with a strong menthol/camphor note and a sour finish. Aftertaste is cooling with a lasting sweetness and notes of wood and papaya. I found body decently thick and the texture quite bubbly, especially in the first few steeps.

One downside of this tea is that it doesn’t really last beyond 9 or 10 infusions, but frankly for a 14 year old tea at this price, one probably shouldn’t expect much more.

SIPDOWN 78
Used 5 grams and 125 ml gaiwan.
I preheated gaiwan, spilled the loose leaf I had (it wasn’t chunk at all) and did 7 seconds long rinse. It brought me strong leather-tobacco notes, heavy woody as well. There are quite a lots of twigs as well.

First steep, 10 seconds
Thick liquor, herbal as Togo notices — not sure about pine, but possible. Camphor present for sure.
Second steep, 15 s
I have to downrate this tea for sure. 97 is truly too much. I dislike the aftertaste somehow, the sourness isn’t my thing today. Woody/piney aftertaste as well. Floral base.
Third steep 20 s
Wet forest floor, piney, a bit of sour notes as well.
Fourth steep 40 s
Now it gets that intended sheng profile. Well done. Camphor still quite well present, grainy and floral.
Fifth steep 60 s
Goes into sweet area. Nope, certainly not worth 97. But I liked it back then, now less… let’s keep it around 90 as average.

This is drinking super nice now. I’m getting a lot of tobacco like flavors, some earthiness, and some other good flavors that I can’t put my finger on.

-astringent and bitter when pushed
-tasted kinda similar to a white tea – in the malty sweet kind of way
-decent aftertaste
-not getting kuwei, qi, or huigan
-maybe a daily drinker because its inexpensive currently at $.16/g
- I didn’t get much out of it. I’ll finish the sample but don’t see myself getting a cake

Brews up a dusky burnt orange color. It has fairly strong tobacco and leather notes. Theres a bit of camphor and a light fig fruityness. The main thing that I find off putting is a strong sour/vegetal note that reminds of sauerkraut or artichoke.

It’s not a bad tea, and I can see someone liking it a lot, but that someone is not me

I really didn’t like this all that much. There were notes of leather and tobacco in the beginning with this tea. They did slowly evolve into something nicer, not sure how to describe them. More and more I am coming to the conclusion that I don’t like aged sheng. It’s not that this was terrible or anything but it had too much leather and tobacco for me. I can tolerate that in an aged sheng if it’s got strong qi. On this one I got no qi at all so it didn’t have that going for it.

I appreciated this review since it differs from most others of this tea. I’m also not entirely in love with aged sheng. Is it those tobacco and leather notes that you find off putting in aged sheng? Most aged sheng I’ve had share a specific kind of medicinal and prune-like flavor that deter me from purchasing more. My hunch is that dry-stored teas can evade developing this flavor.

I keep buying aged sheng hoping it won’t have those flavors but they all seem to have them.

Maybe that’s something I need to really look into.

The tobacco an leather in this one was not too pronounced. The flavor was more pronounced in the Yangqinghao teas I’ve tried. But with those you also had generally massive qi so what the tea tastes like is less important.

Good to know. Thank you for the tip!

backlog
i got a sample with recent purchase. im always on look out for not overly expensive sheng with some age.

I wasnt disappointed. it was very nice fruity camphor sheng. florals were present but kinda on the background. Because of Guangdong dry storage the tea mellowed and smoothed. the color is orange. Former tobacco notes i always pick up with mengku sheng really mellowed out and were barely noticeable just because i knew they were there. later steeps picked up some more astringency/bitterness but nothing unpleasant.
Im expecting some in a mail soon ;)
5g 65ml yixing 212F rinse and short steeps

There was always a nice aged raisin taste throughout the session, sweet and just right. The dry storage was nicely done to bring out the right taste, it didnt have any sour or varnished notes, and was quite simple in it flavour, but a good one.

Later I pushed it a bit and did get slightly sour notes but nothing offputting, just enough to make me want to smack my lips a bit.

It was only those two notes I really got. Some floral but nothing that I could recognise or gush over (I am comparing to some pretty amazing Oolong here though, so i dont know if sheng could ever compare), but the two notes did it nicely. Perfect if you just want a good aged fruit flavour – a lot nicer than some others I have tried in this price range, which is $58/400g, im at the 12th steep in two hours, such an easy drinker. The sweet raisin did change into something a bit more sour but it is still quite drinkable.