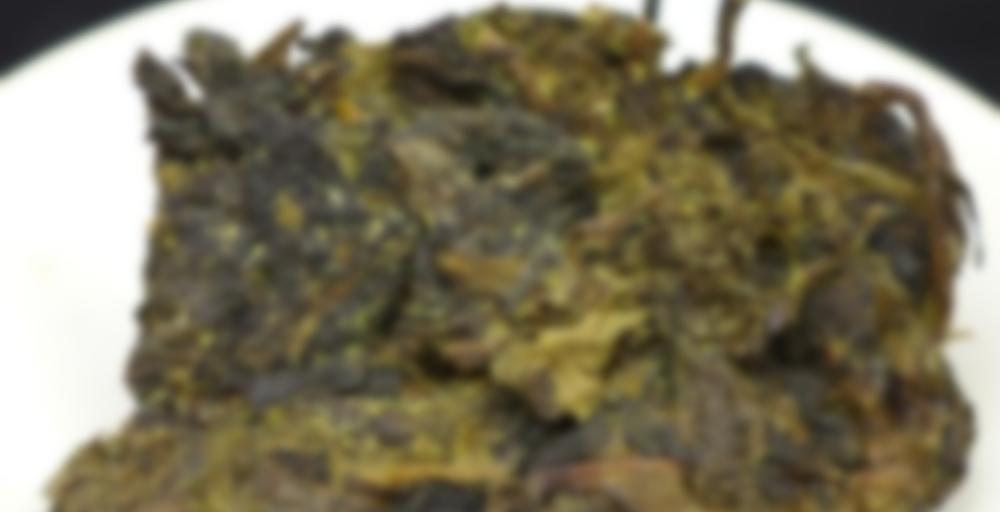 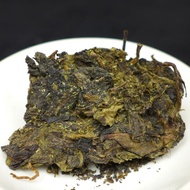 This is a 10 gram sample portion of larger Fu brick tea fermented in 2009. Made by the Yi Qing Yuan tea factory in An Hua county of Hunan province. Special traditional fermentation process gives the tea a mellow, sweet and spicy taste. Golden Yellow spores called “golden flowers” (金花) have been allowed to flourish just after pressing, which gives this Fu Brick a unique taste and feeling.

I find it a little odd that this is the first of this type of tea that I have gotten around to reviewing here. It’s not like I have anything against hei cha. As a matter of fact, I tend to enjoy Hunan Fu brick tea. This particular tea was produced by the Yi Qing Yuan Tea Factory, a producer whose work I greatly admire. As teas of this type go, I found this to be very solid, pleasant, and drinkable, though it did not establish itself as a personal favorite.

Prior to the rinse, the dry chunk of tea brick emitted aromas of earth, raisin, prune, roasted vegetables, and fig. After the rinse, I found aromas of black cherry, autumn leaf pile, old books, and moss. The first infusion then brought out aromas of forest floor and wood. In the mouth, I initially noted mildly earthy and vaguely fruity flavors, though I was soon able to pick out more definite notes of raisin, prune, black cherry, fig, moss, old paper, and wood. The following infusions brought out notes of cedar, leather, tree bark, dried tobacco, minerals, caramel, malt, wheat toast, wintergreen, raspberry, mushroom, sour plum, cinnamon, nutmeg, candied almond, candied chestnut, and cream. I also began to note cooked spinach and kale rather than anything resembling any sort of roasted vegetable. There were also more definite earthy tones in the mouth and hints of a camphor-like herbal presence. The later infusions mostly offered mineral, mushroom, cream, earth, cooked kale, and caramel notes with occasional hints of old paper, dried tobacco, wintergreen, camphor, raisin, and raspberry. Oddly, I began to pick up some hints of bitter orange just before ending the session.

An interesting, likable tea, but also not something I would be likely to reach for with regularity, I could see this tea being appealing to those who prefer a lot of very mellow, subtle flavors in their brews. Personally, I was hoping for something a little rougher and pricklier, something that offered more clearly defined peaks and valleys over the course of a session, but this was still pleasant enough for what it was. I’m certainly glad I took the opportunity to try it and would not caution others to avoid it, but I think there are other Hunan hei cha out there that would provide a more satisfying and memorable drinking experience.

My first tea in this specific category. Surprisingly oolong-like. Same roast flavours, but much softer and in the background, even using porcelain. Same sweetness without bitterness that (in oolong at least) arises from partial oxidation. Same deep, warm expression of the flowery notes which show to me this tea (too) is made from quality material.

But it’s certainly not ‘just’ an oolong. There is the winter warmth and nose lingering of a shou. So basically the good part only, no forest floors here at all. There is something mild but distinctly herbal, like chamomile combined with st john’s wort. There is something warm-soft-nutty, like chestnuts.

And then maybe there’s still something left that you can’t quite lay your finger on, but which appears neither unfriendly nor unfamiliar, even though it’s probably the, er, fungus. Oh well.

As the ‘process flavours’ wane, the leaves still continue to give up their deep and warm flowery notes, which helps in convincing me that this is a good quality representative of an interesting tea category.

As an after-note, a late steep with freshly hot water surprisingly coaxed some medicinal / candy-like sweetness out of the otherwise almost exhausted leaves. Maybe in the future try to keep this one as hot as possible during the later brews.

You are braver than me to have tried this. I still haven’t gotten the courage up.

You know I’ve never really given it that much of thought. I’m inclined to believe that this particular mold might not be too healthy when still alive, but that’s nothing some hot water won’t cure.

I should probably admit that I’m currently developing a new batch of sourdough which I kickstarted from an overripe prune, for which I’m trying to work away its tendency to develop a white ‘kahm’ layer. Also I have previously made and drunk many a (fruit) wine, beer and cider either induced with sourdough (which admittedly is even unorthodox within this particular niche) or fermented completely ‘spontaneously’.

So yeah, I might be more familiar (and on the informal) with the risks and safeties. Which, in short, are: 1) keep things acidic enough so that no botritis develops, which sometimes produces toxic by-products; and 2) make things hot enough to kill any potentially harmful critters, or 3) in wine and beer making, just wait long enough (under airlock!) for the good guys to win.

I’ve never done sauerkraut yet. Most amateur sauerkraut making is way too easy on the rules, even for me :)

Heh, I’ve been thinking about our little conversation here for a bit. Did you realize that your shengs and shous are bitten by the same basic mould families, only these tend not to paint their houses yellow?

I have and I think asperillus is one that inhabits our tea cakes as well. You may inspire me to get some of this to try on my next order.

Didn’t have any expectations going in- just thought it looked interesting and ordered a sample. It is a bit different; in a good way. Normally I don’t like teas that are too subtle, but this one I don’t mind. It looks like Franken-tea when you first open the package….and it’s difficult to maneuver into a glass as it comes off in rectangle chunks. However, the taste is far less frightening than it looks. At first sip you get the taste of ‘nothing’, but then it has a unique honey raspberry (pecan notes when steeped at 205F) aftertaste which lingers on the palate. Very smooth tea with no trace of bitterness even when steeped at a high temperature. I chose to leave it at 185F and that seemed to work out the best for me. Overall, I enjoyed this tea and will probably order a few more samples if they’re still around. Would be more likely to order a larger amount if they weren’t individually packaged. Those who enjoy sweet/subtle tea flavors, or have experience drinking tea, might really like this…wouldn’t recommend for anyone who is new to tea. This was my first time trying this tea type so I think this has encouraged me to try more golden flower fu bricks.

This tea was nothing special. Drinkable. I couldn’t find any of notes or character others have described. I will say it seems to drink forever. The block didn’t even start opening up up until the third brewing, and I gave up on it before it exhausted. The flavour – sort of mild basic ‘tea-y’ was consistent throughout. I won’t buy it again, and it has left me a bit cool on fu zhuans.

I returnith! I’ve been (mostly) inactive for a while now due to turmoil and a general lack of motivation to post tasting notes. I’ve been trying to figure out my life, and have moved back in with my parents for the time being. Anyways, now that I’m settled in I’m looking to get a new start on things, including being more active here on steepster

I’d been curious about golden flower/fu brick tea, and when Yunnan Sourcing started offering this small sample pack I had to try it. The dry leaves are course and dark green-brown with lots of stems, dotted in golden specks of bacterium. The aroma is strong and very sweet, slightly earthy raisin and ginseng notes.

After three rinses (I admit I was more than a bit intimidated by the motley looking leaves) I gave it a sip and was greeted with a very smooth, mild honey-brown brew. Very sweet and mild with raisin, ginseng, and nut notes to match the dry aroma.
Later brews remained similar, but with a bit of bitterness and a touch of green kale-like flavor. Overall a nice, mellow tea that was far less intimidating than it looked.

This is certainly different than pu’erh, but bears some similarity. I expected it to be more shou-like, but the flavor reminded me more of a mild and slightly aged sheng

I’ve always been intrigued by the other heichas. They can be unexpectedly complex.