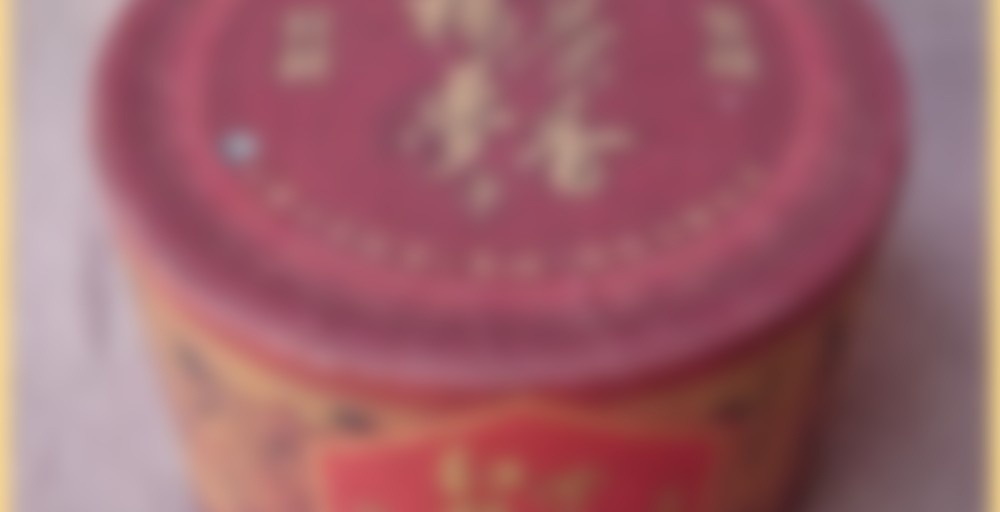 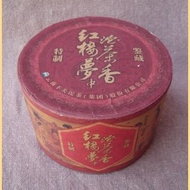 This tea has a strong cha qi but balanced with some mellowsoupy flavor, as the result of blending some wild arbor tea in withit.

A premium “non FT”release from the Xiaguan tea factory. Likely a blend of 2007 and 2008 early spring teas tightly compressed into a 100 gram tuo (bird’snest"). This tea has a strong cha qi but balanced with some mellowsoupy flavor, as the result of blending some wild arbor tea in withit. The “Dream of the Red Chamber” theme is based on a classic novel from the Qing Dynasty authored by Cao Xueqin.

EDIT: I revisited this tea and can happily report that it’s completely different from my previous experience. I think it’s probably more leaf (from deeper in the tuo?), using porcelain, with slightly longer brews and no hay fever this time. I happily got a decent bitter note out of it. It’s still no pipe tobacco but certainly has more character. At some point there was some definite rosemary withinin a kind of lapsang souchong (the well-balanced kind — remember I previously said it was not smoky at all?) Also, the leaves are much, much more flowery, and I’m sure this gets expressed in the brew to an extent as well.

This way, this tea is right up my alley.

This tuo smells fruitier than the average sheng. I feel like if the ‘regular’ Te Ji has pipe tobacco notes, then this tea is a light cigarette. Also not smoky at all in comparison, but let’s say slightly ashy. Maybe it’s because it’s mostly surface leaves, but I miss a bitter note. It is slightly too kind and I can’t make it angry.

Letting go of expectations from comparison, there is something in both the colour (a light yellow) and flavour (mouthfeel) that reminds me of sunflower oil, in a light, friendly way. At some intermediate point the wet leaves made it clear to me why people describe certain teas as ‘mushroomy’.

Overall this is what I imagine when people describe a sheng as having not much aging potential due to being too agreeable to begin with (and then being aged after all).

My nose is mostly out due to hay fever, so unfortunately any potentially interesting subtleties are lost on me. Next time I’ll try porcelain instead of clay to see if I can make it a little bolder.

Neither recommend nor disrecommend. It is a friendly tea but nothing too particular for me — although I must admit it is also a new flavour profile to explore, so I’ll have to give it that.

on steep 7 now. this is a very nice tea, smoke, tobacco. steep 4 had a bit of bitterness, so i dialed it back to flash steeps, and its still doing fine at that. steep 5 had a bit of warm apple cider sweetness. if someone lit a cuban cigar, took one puff and put it out, then if you were to puff on it unlt is how the smokiness is now. rich, sweet, slightly smoky cigar tobacco. flavour like a crisp apple in the later steeps. well worth the money to get one of these.

7g
The aroma of the dry leaf (tuo) is herbal, hay, has complexity and promises an interesting drink. It is highly compressed.
The aroma of the wet leaf is slightly medicinal, fruity, stewed mushroom, sweet peat (Laphroaig/Talisker/Ardbeg aroma), floral with a pollen-like sweetness, dark cherries, strawberries, warm lemon. There is smoke, but it’s not overpowering; it’s smoked fish (kipper) smoke.

5s – Fruit on the front of the tongue, smoky on the swallow, medicinal. It has a mushroom direction: perhaps time has changed it’s sharpness into this fungus flavour profile.
10s – It has the Menghai flavour profile of concentrated herbyness. It has Lapsang Souchong smokiness and slight bitterness. It is complex.
15s – Concentrated herbyness with a mushroom direction. You first get the concentrated herbyness, and then you get the mushroom-ness. Floral sweetness sits on top of the concentrated green base. The only other tea I’ve known to have this is 2002 CNNP Little Yellow Mark Private Order by White2Tea. It does tingle on the edge of the tongue.
20s – The wet leaf now has a pungent aroma. It is becoming astringent

I agree this one has a very complex profile. It kind of hammers away and tosses notes of flavour from all sides.