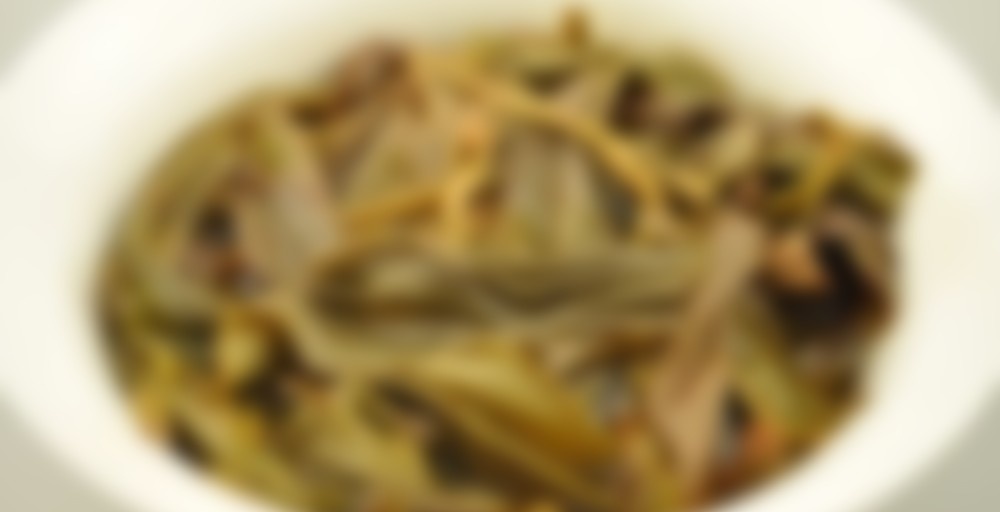 Can be infused 10 or more times without going flat!

Very fruity! The dry leaves of this dan cong oolong are quite green, and emit a musky floral fragrance with a hint of fruit, that is complemented by a faint roast smell. Is it roasted? I’m not sure, but it does have a faint mineral-like aroma.

After slapping the leaves with water for a second, the fruity aroma becomes the most prominent. The fruit character is almost like the smell of a freshly opened bag of gummy bears. Specifically white gummy bears. I mean that in the best possible way, and I’m not suggesting its a cheap smelling tea. Quite the contrary! The fruited quality is enticing, and is rounded out by loads of sweetness and a floral aroma that reminds me primarily of a light roasted shui xian, and secondarily of an unoxidized Taiwanese oolong.

Now I have one, so I can have one.

I think it’s lighter than other Dancongs I’ve had because some of these leaves actually had a fair bit of green on them. I like a dark type oolong best, so I was a bit disappointed by this initially. I thought it would turn out to be milder than I preferred.

It was also very light in colour when pouring, looking more like a green tea and entirely without any hint of brownish red to be seen. Having now been allowed to develop for a couple of minutes, the colour is darker and more of the brownish red. Good.

It smells just right. A bit rough around the edges, with a good wood note and also a slightly yeasty note of baked goods. As in, it doesn’t actually smell like yeast (that would be bad) but of the sort of baked goods that has yeast in it.

Tastewise, it is a bit mild, but it’s the type of mildness that I should be able to adjust my way out of with a bit more leaf or a little less water. Again, it’s got a prominent wood note and also a fairly sweet tinge to it. It’s actually fairly floral, this. The weird thing is, I don’t actually much like floral teas, but I’m coming to realise that what I don’t like is floral scented teas. Naturally occuring blossom-y notes seem to work much much better for me. In particular one it’s downright pleasant, which isn’t something I thought I’d find myself saying.

Finally I had my cup of dancong. I feel fulfilled now.