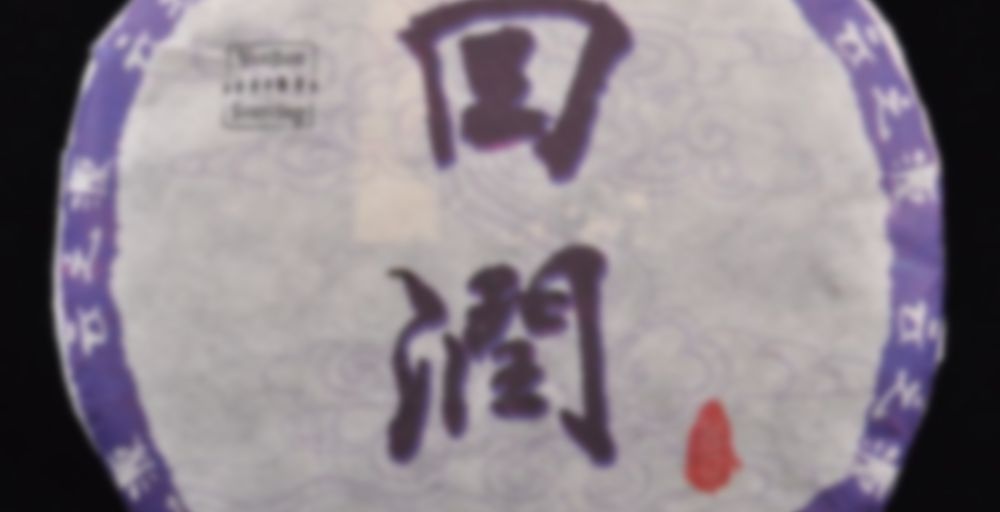 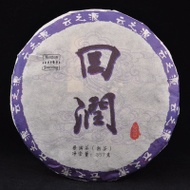 We are excited to offer this premium ripe pu-erh cake made entirely from Spring 2012 Bu Lang mountain material. First flush material was collected from several Bu Lang villages and fermented for 46 days. After fermentation was completed, the tea was dried and graded. We blended the various grades to create a balance recipe comprising of tippy golden buds and heavier grade 1,3,5 and 7 leaves.

The term “Hui Run” refers to the sweet, slippery and soothing feeling that lingers in the mouth and throat even after the tea drinking session has ended.

Amazing amount of cha Qi in this ripe puerh. I’m pleasantly surprised. The leaves smell of sweet cedar & moss with earthy undertones. It’s got a viscous mouthfeel but it’s not a dry tea. This tea has very little bitterness but has a bit of light astringency.

Overall, it’s a well-balanced, smooth, and quite drinkable tea although watch out for the cha Qi. I was quite buzzed before I finished the first 100ml. (maybe I should have ate first)

By the 2nd 100ml, I could feel the chi in my head, and then got that slight heat flush by the 4th. By the 6th steep most of that was gone and I can tell that the tea was going to wash out within the next 2 steeps

But it’s too well-balanced for me. There’s nothing to distinguish this tea in flavor and while I like a good bit of Tea drunkenness, I want to rewarded with a distinct flavor.

I was drinking a Four Seasons Oolong earlier in the day and that particular cultivar has amazing flavor so perhaps this just pales in comparison? Or maybe I’m not getting into puerhs like I had hoped.

Out of the few shou samples I got from YS, this one is among my least favourite. It’s not bad at all, but I find its flavour profile flatter than Yong De Blue or Man Tang Hong, and its texture thinner than Yang Luo Han for example. The mouthfeel is still fairly coating and milky, just not too thick. The liquor has a nice, standard shou taste, no surprises there, apart from maybe some prune taste throughout the session and red wine in later steeps. It is not as sweet as Yang Luo Han and not as savoury as Yong De Blue though – kind of average.

It definitely has a noticeable caffeine content, more so than I’ve noticed in other ones. Overall, I think that for the price this is selling for, one can find a more exciting ripe pu’er.

This is a quite premium-priced ripe made up of a quite tippy blend of smaller and more medium-sized leaves. The cake doesn’t look anything special and the compression is neither too loose or too heavy. I was able to break off a single piece of the top layer that weighed almost exactly the desired 10.5g for my 160ml Jianshui teapot simply by inserting my pu’er pick from the side in a couple of places and then lifting up. I then proceeded to gently break this one large piece into a few smaller pieces by hand. I’d like to note that this cake has the cleanest-looking wrapper I’ve seen, that is to say when I lifted the bing off the inside of the wrapper only had a very small number of broken-off leaves and a few specks of dust here and there. I’m not saying this is necessarily any sort of indicator of quality, it’s just an observation I made.

The dry leaves have a very typical shu pu’er smell to my nose. Even in a pre-heated teapot the scent of the broken-off portion of the cake was very faint, however. I gave the leaves only one average rinse for just over ten seconds and let them rest for ten minutes before I started brewing. The scent of the wet leaves was somewhat surprising. There wasn’t any of the typical manure I smell in shu pu’er and instead my nose picked up hay which I associate more with raw pu’er and another note for which the closest descriptor my brain could come up with is warm raisin. That is not quite accurate, but it’s the best I could come up with. The scent was warm and familiar. Another note of interest is that even the smell of the wet leaves was much weaker than is typical for shu pu’er.

I did a total of ten infusions, for 10s, 10s, 10s, 15s, 20s, 30s, 45s, 60s, 90s and 120s. Since I was using almost exclusively larger chunks without any individual leaves and didn’t do a longer rinse, the leaves had yet to come apart by the first infusion which in turn resulted in a somewhat lighter first brew, which I was fine with. The color of the liquor was a cloudy red-ish orange. This cloudiness is something I noted in the first and last couple of infusions. In the mid-steeps when the liquor was darker it was hard to tell whether the soup was clear or not or if the cloudiness had persisted. Typically I associate the clarity of the tea soup as being an indicator of quality to a certain degree, but I’m not sure if I’d say the inverse is necessarily true and the lack of clarity is some sort of sign of the lack of quality. You shouldn’t take it more than as an observation. As expected, the first infusion was quite light, but it tasted okay although it’s hard to really say anything about it flavor-wise. It was maybe a bit sweet.

The second steep brewed darker. It coated your mouth with a slimy coating similar to thick saliva. I’m making the guess that this sensation is possibly the one the name of this tea refers to according to the description. The flavors in this infusion were interesting, but also beyond description. They weren’t really reminiscent of any flavors you can find anywhere else to my knowledge and therefore came across as somewhat abstract to me. Besides the flavor and mouthfeel the tea had to offer, it also made me sweat quite a bit and I might’ve even detected some tightness in my chest. In my limited personal experience and based on what I’ve gathered from others, cha qi is not that common to come across in shu pu’er so I was pleasantly surprised to find it here.

Based on the trajectory of the first two steeps, I felt this tea had promise to be the best ripe pu’er I’ve tasted, but unfortunately the tea didn’t manage to live up to that potential. The third steep brewed a very dark red. Not a particularly gorgeous red, just red. It had perhaps some sweetness and perhaps the tiniest hint of a toffee note, but I wasn’t getting much from it. The earlier slimy mouthfeel was greatly diminished, but the tea was making me feel warm and I could feel the qi in my chest. The qi continued to be present for the next three steeps before dropping off, whereas the taste remained extremely basic throughout. The tea tasted clean, with the sweetness gradually emerging as the infusions went on. The slick, slimy mouthfeel was coming and going in nature making a small return a couple of times. The last infusion I did interestingly had possibly the most flavor out of all the infusions I did, but at the same time I got the sense the tea might’ve been on its last legs. I’ve seen the pattern of a tea giving one last decent brew before totally giving out enough times to develop a sense for it. Whether or not the tea still had more to give, I was forced to end the session there due to time constraints and also being quite adequately hydrated by that point. Flavor-wise the final infusion actually had something else going on besides the base shu pu’er sweetness, but I’m not sure if there would’ve been anything more of interest for me to discover had I continued with the session.

I really had my hopes up for this tea after the second infusion. For a ripe this tea has decent qi going on, but in terms of flavor the tea just came across as incredibly stripped down after the second steep. It doesn’t even actually have that much of the typical shu sweetness and instead simply presents this base underlying shu pu’er flavor that isn’t all that much. On the sheng front this reminds me of the Misty Peak spring 2016 sheng which had the qi going for it, but the flavors just weren’t interesting. If this was a raw, I’d stash it away for ten years and come back to it, but since this is a ripe I’m not sure if I can really expect any huge changes over time. I will have to try brewing this in slightly different ways as time goes on and hopefully get some better results. This wasn’t a bad tea, but it didn’t turn out to be the first ripe I could award the green Recommended stamp to like I’d hoped.

A very nice tasting ripe from YS. It is quite complex. There is some fishy flavor, so it will probably benefit from some aging. It’s an interesting mix of sweet dates, coffee, and bitter chocolate. It is dark and thick, and seems to have a lot of caffeine. I like it! I think it has a lot of potential.

This is a very tasty, sweet puerh tea with a fair amount of fermentation flavor. It doesn’t have a huge amount of fermentation flavor but is earthy. There are sweet notes behind the earthy flavor but I am at a loss to properly describe them. Either I am out of it today or just not getting the specifics. Either way I have a lot of this tea. I bought a tong about a year and a half ago. So I am glad its good. I only steeped this six times because of watching my caffeine but this is no weak tea. It would have certainly gone 15 steeps.

Thanks guys, your reviews and responses have helped me make up my mind to give it a try!