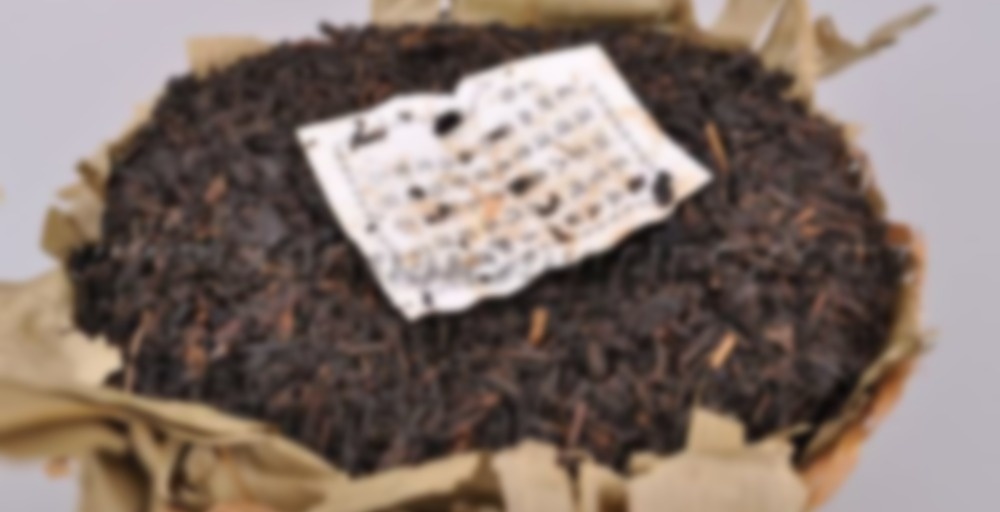 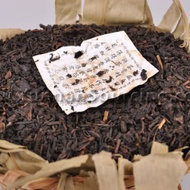 Anhui varietal of black tea (黑茶) processed in the traditional “wo dui” method. “Wo dui” or fermentation piling process is a precursor to the method used to produced ripe pu-erh. This basket of tea has been aged 4 years and produces a aromatic almost sweet liquor with a deep red color. As you drink this tea smell the cup (between pours) and you will a notice it smells alot like aged raw pu-erh.

The story of the travelling tea sample….this one comes to me from Terri… who received it from stephanie who got it from boychik who apparently got it from tea explorer? good times with tea friends! I’m not sure this one is for me, but i’m not sure it’s not for me either. I’ll have to try a few more heicha before i decide where i feel about all of these. the first few steeps where sweet with a strange taste to them….later steeps were a little darker… that’s all i’ve got as this was a yesterday tea :)

I bought a sample of this ages ago and just discovered it again in the big box of samples as I was looking for a sheng to drink. It immediately told me that I should open the sample bag and set to. When I say a sample, I mean a 100g bag. It is a very generous sample bag. The size of the sample is massively impressive. I had wanted to buy a whole basket, because, I mean, basket of tea. Who wouldn’t? Anyway, I did not because of the additional cost and what if I did not like it? I guess I should have bought the basket then. I like this tea.

I started with a rinse and a 25 second steep. Then I added 10 seconds for each subsequent steep. This seemed to work well and I am now half a dozen steeps into the tea with it only beginning to lose its potency now. It produces a thick dark brew that has woody, cedar and leather notes to it. It’s mellow and sweet, and you can tell that it is produced in similar fashion to shou puerh. The liquor is an almost black dark brown. There is a residual sweetness and a slight mintiness that cools the breath as the aftertaste emerges. Yes, this tea and I are getting along quite well together.

First off, I’ve really wanted to try this tea for awhile! YS offers 2 options:
1 – the entire basket of tea, 450 Grams of tea, which looks so awesome, what a great presentation, but which would probably last my entire life, not to mention that I probably already have enough tea for 7 lifetimes…
2 – a sample…a 100gram sample, that is! That’s a huge sample!

Granted, it is not an incredibly expensive tea, but as much as I want that basket of tea, I also only want it if I’m going to drink it. So I started looking around to see if anybody had some.
This sample has a history, possibly more of a history than I know about, but what I do know is that it traveled from TeaExplorer’s cupboard to Boychik’s cupboard to Stephanie, & then to me!

I’ve been drinking it for about 3 hours, a couple of cups here & there. Visually it resembles a Shu puerh in shades of mahogony & brown. The dry aroma is of bamboo shot, hominy, & molasses. When I warmed up the leaf I smelled an earthy boston brown bread & buttered grits.

I gave it a rinse & started steeping. Immediately the flavor is sweet , kind of hominy-like, & has that minty ‘fresh’ quality. This continues into a few steepings, while the flavors of cedar & molasses arise. This is a lot like a Shu, but it’s also different in that it is sweeter, & the flavor profile is slightly different. There were a few cups that were creamy textured. Flavors I’ve picked out include cedar, bamboo shoots, sorghum, water chestnut, & that minty fresh quality. Right now it’s like a sweet spring water with a menthol after feel. I think I can get quite a few more steeps out of it, but that is all for tonight.
Thanks to everyone who passed this tea on, so that I got a chance to sample it :)

ohhhh, I’m really not the best person to be writing the first note on this tea, haha. Welp, here goes nothing!

First off, thanks very much to boychik for the sample! I’m a moron and forgot to do a rinse before my first steep, which I did in my semi-western style. 1 min steep. I have never had a shu this sweet! I am assuming it is a shu?? I’m not even sure, it tastes so different…no dark woodsy musty notes, but definitely a fermented taste here. There is a faint taste of bamboo shoots…perhaps from the basket?

I’m not sure if this is something I’d want to drink regularly, but I’m enjoying it this morning and just appreciating how DIFFERENT it is. I will be interested to see if the next steeps change much flavor-wise.

It is different. I couldn’t do more than one steep and I rinsed it.

Hei cha is deeply fermented most of the time. It is basically a “loose” puerh I think.