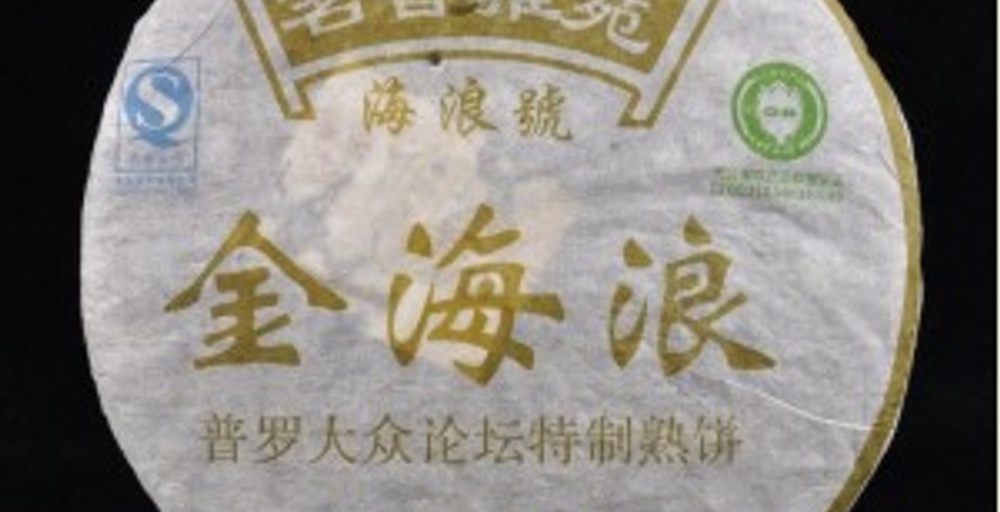 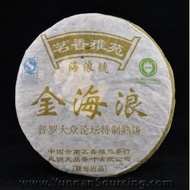 “Jin Hai Lang” means “Gold Hai Lang” and is one of two cakes pressed from the same fermentation batch. “Gold Hai Lang” has more large fermented buds than it’s partner “Jin Se Zhen Min”. Both of these cakes are great examples of what can be achieved using high grade raw material, small batch fermentation and time!

What a unique tea this! At first I was thinking that there’s something wrong with it. I also thought: I kinda like it, but I am not crazy about it. Well, by the fourth steep, I was crazy about it :D

Overall, this is a tea that reminds me much more of a light roasted (pour over) coffee than other teas. If you like those, you will love this tea. It is also very complex and changes over the course of a session, so I would recommend gong fu style brewing to get the most out of it. I gave it a good 15-20 sec rinse, which was a good choice.

The first sip is very acidic right off the bat to make sure you know this is not going to be your standard shou. It is very tangy with notes of citrus, dried lime, coffee and autumn leaf pile in the aftertaste.

Second steep has a mouth-watering, bubbly mouthfeel. The tea is a little less sour now (but still very much so), with woody and metallic notes emerging. The aftertaste is significantly sweeter this time.

Third infusion is nutty, dry and warming in the throat. It has a spicy note reminiscent of cloves. The aftertaste is an interesting mix of the aftertaste you’d expect to get from sour ale and a baltic porter.

Fourth infusion has a very bubbly texture. The decaying leaf flavour is more prominent now too, which makes it a bit like an aged shou mei. I can now also feel the caffeine rush and a body warming sensation. Smelling the wet leaves gives an interesting cinnamon bun aroma, not something I would expect either. The aftertaste is pungent and long, as the sourness peters out and gives way to sweet, spicy, and earthy notes.

Fifth one is probably the most balanced yet. As the sourness decreases, there are new flavours of wet rocks and tree roots emerging. The finish is still very drying though.

The next steep finally shows some sweetness earlier on, the sweet side reminds me of rock sugar. I also get flavours of hay, dark chocolate and apples.

Finally, I finish with seventh steep that’s already noticeably lighter in colour. It is somewhat herbaceous and has a distinctively aged taste.

I think everyone serious about tea should try it, if nothing else for the novelty at least. Oh, and it has some decent cha qi too, although a bit too rushy for my liking.

As much as I’m skeptical about shou pu’erh, your description certainly makes me want to try it! Maybe someday, when I have the patience for a gong fu session.

I am thinking of getting the cake. If I do, I can give you some to try it out ;)

That would be neat!

I liked this, but it was not my favorite shou. The aroma is sweet, earthy, and wet. There is some fruitiness and maybe some citrus present as well. The taste is smooth, earthy, and reminiscent of citrus and wet autumn leaves. Very smooth taste.

The dry cake gives a slight clove and dry earth scent, but I didn’t get much else from it. I placed a generous amount in my warmed gaiwan and gave it a shake. I picked up some interesting tones from the warmed leaf such as: sage, parchment, drought earth, and a desert scent (born and raised in Arizona). I really liked the tones I was picking up, so I knew that it would be interesting. I washed the leaves once and prepared for brewing. The herb tones came out from the steeped leaves swiftly. I was picking up Thyme, Tarragon, and old Basil. Afterwards, I was getting more earth tones like mud and copper. The background presented some sweetness like dried cherries. The drink was intense! This was a very unusual experience, and I loved it. The sip was super dry, and I mean like Sagrantino wine bone dry. Then, I got past the mouth drying and I picked up heavy minerals with copper, iron, and nickel. I took a few more sips and then I revisited the same desert but with rain pouring down. A uniquely heavily sour tone followed the entire session. I actually checked my water and vessel just to be sure it was the tea. This brew is sour, and I mean like sour patch kid sour! I was actually puckering during each sip. This tea gives a ton of mouth action and tongue prickling. The best part is once you get past these tongue wrestling obstacles you reach a delicious sweet aftertaste, as if you’ve reached the inside of the sour patch kid. The sour tones mellowed to a more green apple sour in later steeping. Also, the sweet tone becomes intense like Stevia. This was an awesome session. I love teas that create an experience. I love the ones that become imprinted on your tongue and mind. This puerh was certainty one of them. Although, I did not experience any qi, which is alright; because, I seldom do with Shou.

One of my favorites. very interesting for sure.

Thank you for the experience :)

Glad you liked it ;)

Adding this one to my wishlist!

A good one. The as you like ripe from them is also good.

I’ve good things about that one as well. I may be needing to pick some up.

After reading the notes here I’m glad I just got this from the YS. us site 20$ less than the. com site price. Wonder what you all paid for it 2 years ago.

I read this note after drinking the tea for the first time today and I must say that my experience was quite similar even three years later. I guess 10 vs 13 years of age is not such a difference :D

I will also write a note for it later.

Thank you Boychik for this sample. This is excellent shou puerh. I did not notice the coffee notes that other reviewers have mentioned, I managed to miss that one. I do see the citrus mentioned although I didn’t think of it until afterwards. It is a nice sweet tasting shou with very little fermentation flavor. If Yunnan Sourcing does not sell out before my next order I should like to procure one. I gave this tea twelve steeps because today is one of those rare days when I am not really watching my caffeine intake as I don’t have to set my alarm tomorrow. I think I could give it up to three more steeps before it gets to weak, maybe four.

glad you like it. get it before another price increase :)

Drank my sample of this tea from a friend all day today at work.

The first couple of steeps had an off putting sour note, but after that it was all nutty sweet wonderful shou flavor and very enjoyable!

Enjoying the “Gold Hai Lang” as my breakfast tea. Light fermentation shu so it is mellow, smooth, and richly flavored. Nice choice for the first cup of the day!

Just out of interest, when did you purchase this tea?

Ok. I just wondered if you had been aging this one.

Nice shou. Clear burgundy soup, clean sweet taste. Some coffee notes. I wonder if it will be good as breakfast tea. Long lingering sweet and sour taste. Maybe like citrus. Smells like when you soak dried fruits with boil water.
Gongfu
6g 100ml 212F
rinse/ pause/15/15/20/30/45secs etc
The more I drink it, the more i appreciated quality of this tea.

This is a real keeper. Very smooth, just a touch of astringency, medium fermentation. Not earthy, more dark coffee. Delicious!

Okay, if I am a Sheng Yiwu snob, this tea makes me a Shou Menghai snob. Another excellent Shou from Yunnan Sourcing!!!!!! This tea is a joy to drink. The soup is a very deep mahogany. The taste is mind blowing. There are so many layers of depth to this tea that I have no idea how to describe them. The consistency is incredible. I am on steeping seven and it tastes like it did on steeping one. “Jin Hai Lang” means “Gold Hai Lang” and in my opinion, this tea is truly golden!!!!!!

I’ve yet to experience any super complex shu puerhs although I do enjoy the good ones I’ve tried. I like the idea of layers of depth :)

Stephanie,
That is just what I call it. I know there are many undertones, my taste buds just can’t tell my brain how to describe them.

Puerhs are so hard to write about! It is hard to find proper words, for sure.