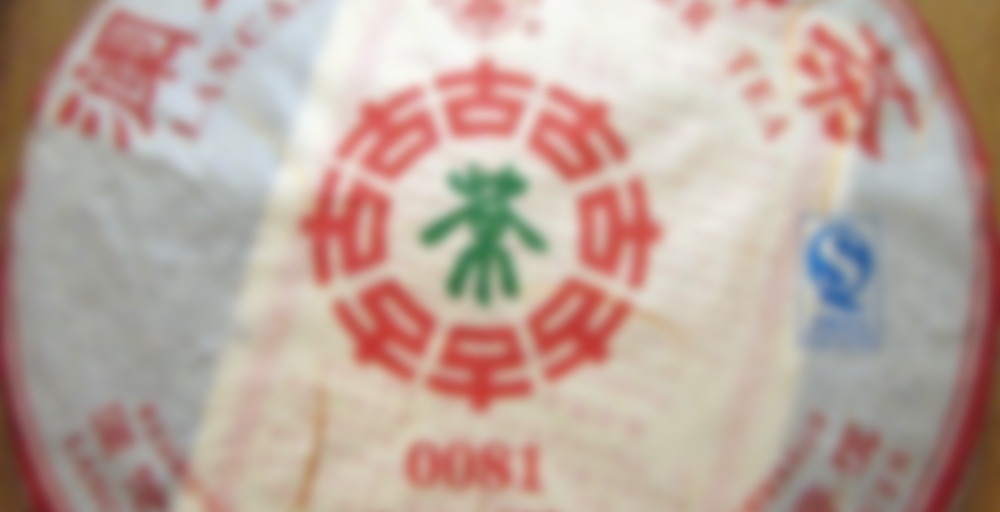 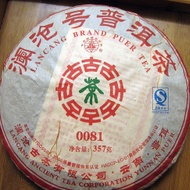 A classic Lancang Ancient Tea Company blended recipe cake. The “0081” recipe has been produced for several years. A well balanced blend of Jing Mai area fermented material this tea cake brews up a sweet balanced brew. Fermentation level is medium and there is a noticeable and stimulating mouth-feel to the tea. Though just a few months old this tea cake does not have much of a fermented flavor, the tea liquor is almost totally clear.

A nice ripe puerh which I think the description of balanced is right on. A little on the earthy or maybe woody side in a good way would likely be its most unique taste factor. Gave lots of fairly consistent infusions with good holding power for a ripe puerh and overall a good everyday puerh with a more unique taste.

I generally don’t like Lancang area sheng pu’er: I find it bland and lacking depth. But in the spirit of “don’t knock it until you try it” I kept an open mind.

The leaves are the usual “pretty face, ugly butt” blending trick. I should mention that this review is of leaves from the back of the cake. Also, the tea was pressed in January 2009, meaning it’s likely summer 2008 tea material, maybe with lighter fermented stuff from fall.

The first three brews tasted very earthy, like the smell of loamy soil, so I would suggest rinsing this tea twice to reduce some of that taste if you don’t like it. Not fishy or pondy, just muddy. For the large size of the leaves, the tea held out for an impressive 13 infusions, even when pushed for more flavor.

The next infusions were sweet, earthy, woody, finishing rocky. They made me salivate quite a bit, and the “mouthfeel” of the tea was comfortable and oily. Not too much aftertaste, and not too much depth, but enjoyable nonetheless. It took extra long infusions very well. All of this adds up to be a good tea for brewing at work, where I have no one to impress and want passably good tea even if I forget it or otherwise abuse it.