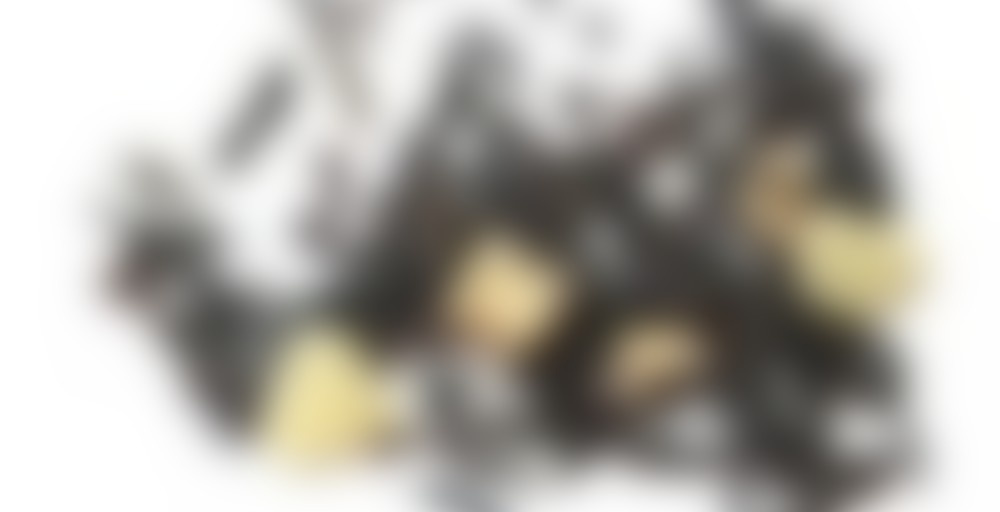 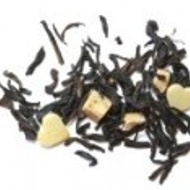 Sorting through my stash last night, I came across a few bits and pieces that I thought were long finished, so today I’m going to have a remnants day, re-visit some old friends, and finally say goodbye to them. This is one of them. I was drinking it about this time last year, I think, so I’ve had a good long break from it.

I gave this four minutes in boiling water, added a small piece of crystal sugar and a splash of milk, and remembered to STIR WELL! If you don’t, the chocolate and fudge pieces don’t melt, and the full flavour just won’t be there.

This is better than I remember, actually. That kind of surprise is always nice! I think maybe I’d just got a bit fed up of it, so it’s nice to revisit with a fresh palate. The fudge pieces add a lovely, buttery richness, and the white chocolate a smooth, delicate sweetness. I can taste both over the black tea, which is malty with absolutely no astringency. Possibly the sugar I added helped to amplify the chocolate and fudge flavours a little, but I am getting “caramel” as an overarching flavour.

Trying this again has actually made me want to place another Yumchaa order. I’m going to see if I can hold out until the weekend, though. I’m sad there’s no more of this in my cupboard. It’s a definite winner!

ANother tea from Scheherazade that I am having the pleasure of trying. This one? I think i’m going to hold off rating until i have another go at it. It’s pretty weak sauce at the moment and i’m not sure why. I can almost taste the cocao notes if i focus really hard while i’m drinking it, but the base is almost not really there. I’m going to chalk this one up to not having steeping directions…and no, yumchaa doesn’t feel the need to share them on their website either. bah!

I usually leave it 3 or 4 minutes, and make sure to stir really well. That’s all the advice I can offer, really. I started out badly with it, and got better after a bit of trial and error.

:) yeah tried to pay attention to your notes on it since i knew you’d had a bit of a fussy time with it

Sample seven! I made my goal, I did! I think maybe I could get rid of a LOT more samples if I set myself a more ambitious goal. I frequently put down ‘finish X samples and Y tins before buying new tea’ goals and those work well for motivation, but I wonder if maybe I should aim for a higher amount of samples next week. Ten perhaps? Yes. Ten samples done and decupboarded next week.

Anyway, I was in a caramel mood today, largely because I have placed myself on Snack Control. Have even been out and got excersise! Ew, yuck. Several hours later I’m still coughing a bit. I feel ooooooooooold! So yeah, that’s why I was really feeling the lust for this one now.

Cteresa sent it to me and she recommended that I had it with a little milk and sugar in to get the most out of the flavouring. I never add anything to anything save the rooibos the other day, so I wasn’t really very keen on just doing it now without at least trying it neat first. There was just the right amount of leaf for my small pot which empties into a large mug, so there was enough that I could easily try it both ways.

I brewed it like I normally do, completely forgetting that I was recommended to also make sure to stir it thoroughly both during and after steeping. Oh well, nobody’s perfect.

First I tried it neat and the flavour was all daaaaark and slightly astringent. There were three equal parts to the flavour for me. One part nutty, one part caramel-y and one part cocoa-y. I wouldn’t say that any of these were stronger than the others, it seemed a fairly even and seamless mix to me. I suspect the astringency I mentioned earlier is a result of these flavours rather than the base tea, because the base is a Keemun and that has no business being astringent.

Next I tried to add the milk and sugar as recommended, and it definitely made the tea sweeter. I suppose that’s to be expected really. What with having added sugar. Flavouring-wise, I’m afraid I didn’t really feel it made much of a difference, possibly because I’m so unused to having any additions in tea at all. I find it a bit distracting when it’s there now.

That said, yes, the milk definitely brought out the caramel a lot more and made it amore sweetie sort of flavouring as opposed to the very dark profile from before. I’m just not sure I didn’t actually prefer it without additions. I think this blend might have benefited from having a little vanilla in it as well, to create that sort of creamy sweetness without having to add things.

I have already decided to make a Yumchaa order the next time I shop, so I will probably buy some more of this. Then I’ll have to conduct a number of experiments with it and additions and vanilla. At any rate, a caramel flavoured tea will definitely get used up fairly quickly around here.

Congrats for exercising! I hate it too. :) The closest I get is walking to and from work—which equals two miles a day so that’s good at least. But I end up craving sweet stuff afterwards. So sweet flavored teas are a lifesaver!

I tend to only put milk and stirr like crazy – the caramel is real pieces of toffee, that is enough sugar I guess. But I do love this with milk.

About vanilla and chocolate, I got a tea (most expensive per weight flavoured tea i ever bought) from Fauchon, but I can not like it, the vanilla is too much, it makes me think of Nesquik!

Stephanie, thank you. For the longest time excersise for me has been the walk to and from work four times a week, which I think totals the same as yours, but when you are a snack fiend with a forceful addiction to Pringles (they don’t exist! They don’t exist!!!) and cheeeeeeeeeeeeeeeeese (Gromit) that’s just not enough. So additional walkies on the other three days or indoor excersise if the weather is awful (I’ve got some dvds)

Cteresa, yes, I can see that could easily because a problem. I tend to like vanilla best when it relatively subtle at first and primarily pops up in the aftertaste. My perfect vanilla has a strong aroma and a strong aftertaste but only a discreet to mild sweetness in the actual sip. I am still searching…

This a sample I received from my dear cteresa.She wrote on the bag “stir it well !” so did I (sometimes I am very docile :) )

At the very first sip I was like …ohhh the tea taste is like a David’s tea…a special taste I always had in any David’s tea I tried.And I found it weak, very weak.

Disregarding this " tea signature", continuing sipping it, I definitively recognized a keemun and was more satisfied.
The caramel is really well balanced,and cocoa is present but really much on the background.

cteresa mentioned to add some milk, I’ll try this way next time.

A decent tea, but for a chocolaty & caramel tea I do really prefer Wedding Imperial, it has much more personality to my opinion.

My favorite chocolate tea right now is Thé du Loup – which is also quite dry. Wedding Imperial is a tea I am on my second tin of (it was my very first Mariage tea!) and maybe I am a bit tired of it because of it, but find it tricky sometimes.

I absolutely love this tea, it’s not too much caramel that it puts me off, I recently had a caramel tea and the smell was too sweet it gave me a headache so I was I was put off caramel teas for a while.. then I saw this being sold around Brick Lane and I didn’t even realise that they sold yumchaa there!! Anyway, this tea was the first one I tried from them,, and I’m impressed!! The texture is so amazing, there are chocolate hearts in this and they all melt with the caramel pieces, it’s amazing, not too sweet but perfect.. I need a dash of milk with this and it’s delicious!! I’m going to buy more haha.

I have been most unfair with this tea. Most most unfair. I thought it was good but sort of meh. Except now I decided to try it a bit differently and I think I have cracked it – it needs sugar and milk. It needs a very generous tea serving and it needs to be stirred often, while brewing and before pouring and even in the cup, because it was so much texture from the melted caramel and chocolate. But done like that it just might be the most decadent tea I ever had ( apologies to Wedding Imperial, but this has just more texture), though I got hopes for yet untried Fauchon Chocolate Tea.

Had this at yumchaa and I couldn’t figure out how I felt about it at first (although I drank the whole pot) it tastes a bit like baileys. I think I’ll give it another go

Time I used this sample, albeit chosen whilst I’m watching a Romeo and Juliet style Buffy The Vampire Slayer episode that ends up with a lovers murder, suicide. I feel my mind felt in the romance mood (tragic or otherwise) and that is my reasoning for picking this tea, on a subconscious level. I hope that makes sense, my mind is a little scatty at the moment…it’s been a long day.

Served with a lump of sugar and a drop of milk.
Even with the sugar this just smells like a standard malt, black tea. Nothing sweet nor caramel like about it.
In flavour this is pretty much a rather mild, malt black tea with a touch of chemical sweetness. Not caramel and not the sugar cube (as I’m used to those), but something amongst it that is chemical and almost dry and nutty.

Very disappointing, I wanted caramel :( It has a cute name but that was the best thing about it. As a mild black tea it’s ok but nothing special, the chemical taste is unpleasant though still drinkable. At least it’s good enough to dip my custard creams into.