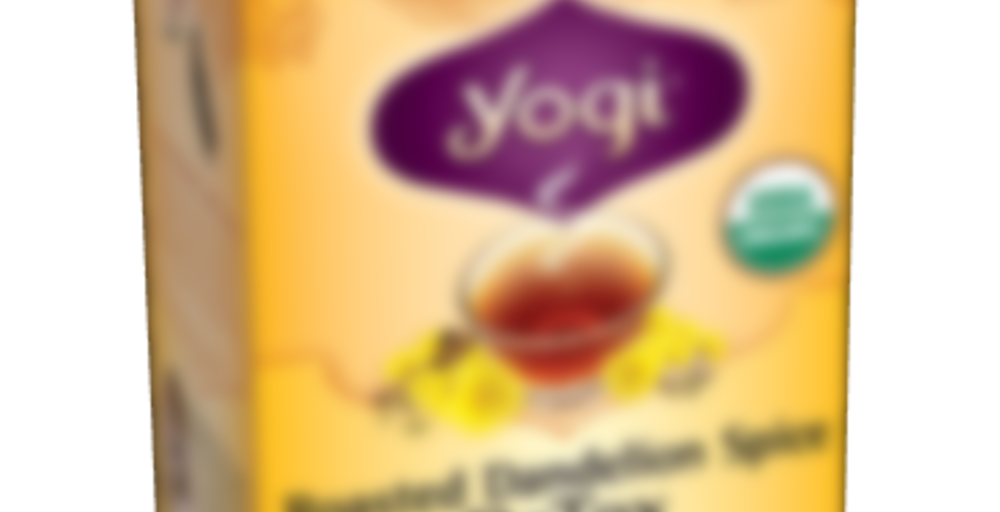 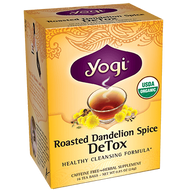 For centuries, Dandelion has been traditionally used by herbalists as a cleansing herb to support liver health. This delicious tea is an intriguing, all-organic blend that builds on this tradition, showcasing this celebrated herb. Purposefully formulated to support the body’s natural cleansing processes, we combine the finest Organic Dandelion with Cocoa Shell and Yogi’s traditional spice blend of Cinnamon, Cardamom, Clove, Ginger and Black Pepper. Naturally caffeine free, enjoy an uplifting and delicious cup any time of day to help you feel refreshed and in balance!*

*These statements have not been evaluated by the FDA. This product is not intended to diagnose, treat, cure, or prevent any disease.

To get the most out of every cup, bring water to boiling, cover and steep 10 to 15 minutes. For a stronger tea, use 2 tea bags. Enjoy 2 to 3 cups daily. For best results, drink regularly.

Final tea for January. As expected from most any dandelion-heavy blend, it’s bitter and tastes a bit like dirt. :D

I’ve been taking some herbalism courses on and off over the last couple years, and many of the preparations include dandelion in some form or another. I think dandelion is one of those really wonderful plants where you can pretty much use the whole thing in one way or another. A real powerhouse herb, though most everyone I know considers it to be a pesky weed.

Surprisingly for a Yogi tea, this blend doesn’t have any licorice (though I swear that was the first thing I smelled when I opened the bag). The ingredient list is relatively short, again for a Yogi tea. I can’t say I loved the taste of this one, but I didn’t dump it out either.

I just went through my tea collection to figure out what to put in the Herbal and the Holidays TTBs when they get to me and I found a lone tea bag of this that Yogi sent me a little while back.

I’m actually not sure how I feel about this, there’s a lot of different flavors and I can’t pick them out well (though it doesn’t help that I’ve never had a dandelion tea before!) I can definitely taste some spices, pepper, cinnamon, nutmeg(?) – it tastes like spice bread in a really strange way. There’s some cocoa notes, this might be okay with some cream too. I’m not totally opposed to this (surprisingly!), probably wouldn’t pick up a whole box, but if a tea bag or two came my way, I’d probably drink it.

I can definitely smell the cardamom as I pull the tea out of the bag. It has a long steep time (10-15 minutes) which works for me because I forget about my tea all steeping all the time. Until now I have never had any sort of dandelion root tea, so I am eager to try it……now that I have tried it I am not sure I would get it again. It’s a strange taste to me and the flavours that normally stand out to me (cardamom and cinnamon) did not shine through to me.

Free sample from the company. I’m usually not too fond of Yogi teas – too many ingredients. This one has a fairly reasonable quantity of ingredients and I like that they’re organic. What I really like is that the cocoa shells dominate everything else in both scent and flavor. There’s also hints of roastiness, pepper, and cinnamon. Buuut mostly it’s cocoa. Yummy yummy cocoa. This reminds me a lot of Herbal Infusions’ Cacao Tea, though I think I slightly prefer that one.