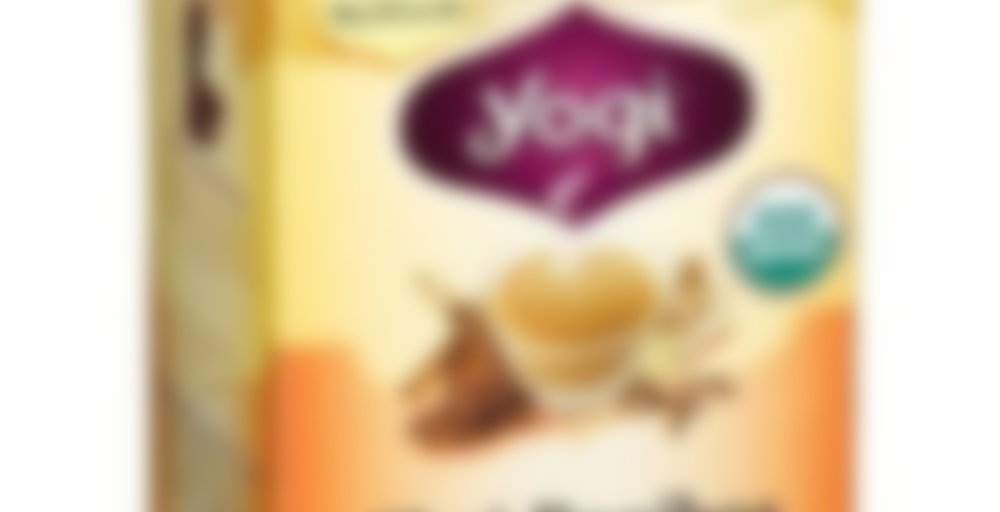 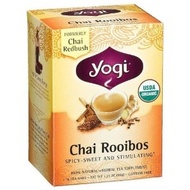 Evoke the beauty of South Africa with Yogi’s delicious all organic Chai Rooibos – a creative twist on traditional chai. Bask in the spicy warmth of Indian chai with caffeine-free rooibos, the red tea of South Africa. Enjoyed for centuries by the people of the Western Cape of South Africa, rooibos is now known to be a potent antioxidant, which helps protect the body from damaging free radicals. A traditional Ayurvedic combination of cardamom, cinnamon and clove adds gently warming and cleansing properties. Enjoy Chai Rooibos any time of day for a stimulating cup of tea.

This is great with a splash of Almond Breeze unsweetened almond milk/coconut milk. It smooths out the spices and adds some gentle coconut flavor, no sugar needed (and less fat, more calcium than dairy milk!). taken this way, it reminds me of the “Thai Coconut Chai” I used to have from Celestial Seasonings.

A bright almost orange-flavored chai – no orange in there though! Has a good amount of spice to it. I had it chilled, without milk or sugar. (Tea is how I convince myself to drink enough water every day!) I like that it’s rooibos, so I won’t oversteep it and make it bitter.

Thanks to Rachel for recommending I try a rooibos-based chai!

One of my absolute favorite blends of chai. So much body and so nourishing, refreshing and warming. I find it best on it own untainted and well steeped.

Delish , it makes me feel like I’m in india and south africa at the same time with a teaspoon of honey it warms you up with a tang of spice and fruit

A nice herbal chai. However, I prefer some of this company’s other herbal chais. I can definitely taste the rooibos here, so if I’m in the mood for that, it’s a good choice.

Sent a few bags to Mr. Bednar without trying it myself first.

It’s fine, nothing special and not worth the sometimes steep prices Yogi teas can fetch. I smell it all, I taste it all — rooibos, cardamom, ginger, cinnamon, clove (barely on swallow), stevia. Despite the nose-burning spice of the dry bag it’s not spicy in taste. It’s not initially sweet but much later after a swig the stevia comes out as a kind of superficial sweet slickness lining my mouth. The brew is watery. Another meh by Yogi.

Martin: my bag tag says, “In life, don’t create just an impression, create a trust.” What?? On some level I get it but it’s so vague, kind of like Yogi teas themselves. Anybody want to enlighten me because I feel I’ve failed, haha.

Yeah, their quotes sometimes hit the nail on the head. But sometimes they are weird or vague. Their blends sounds in theory usually so tast, nice packaging; but they should focus on teas I guess.

Taking a mental inventory, but I don’t think I’ve ever liked a Yogi tea. Always far too slick and sweet, as you’ve mentioned here.

Never had a Yogi that I’ve liked, either. They go way too hard with the stevia and licorice root. I feel like Yogi makes blends that are meant to appeal to people who have deprived themselves of sweets for years and have forgotten what caramel or mocha or whatever actually tastes like.

I kind of enjoyed Yogi (but European version) with name “Positive energy”. But I rated it “only” 75/100.

SIPDOWN of derk’s tea (I think). Thank you.

Quote on tag: “Speak to make yourself happy, don’t speak to impress others” I guess it’s true! And many people aren’t actually doing it. So a quote to live by, I guess.

The tea. Well, I am not impressed as in previous attempts of this tea. I guess it was even worse and sickly sweet because stevia. Spices were strong, if you call spices the ginger. I haven’t noticed nothing else.

Happy to have it finished. That’s all.

Stevia in just about anything kills it for me

I don’t mind stevia. Usually. Not in this tea.

I knew I was going to need something a bit spicy that I could steep a big mug of to keep me warm for a while this morning, so I stole some of this from the SO’s housemates. I wouldn’t buy it, but it served its purpose!

I’ve been looking for a good bagged rooibos chai, so I ordered five different kinds from Amazon. This is probably my least favorite. I really don’t like cardamon, which is the second ingredient after rooibos, and it has stevia, which often bothers my stomach and tastes unpleasant to me. Even with milk, the cardamon flavor dominated. This may be just what someone else is looking for, but it’s really not for me.

This one doesn’t do much for me. No matter how long I steep this tea the rooibos overpowers the spices. It’s pretty bland.