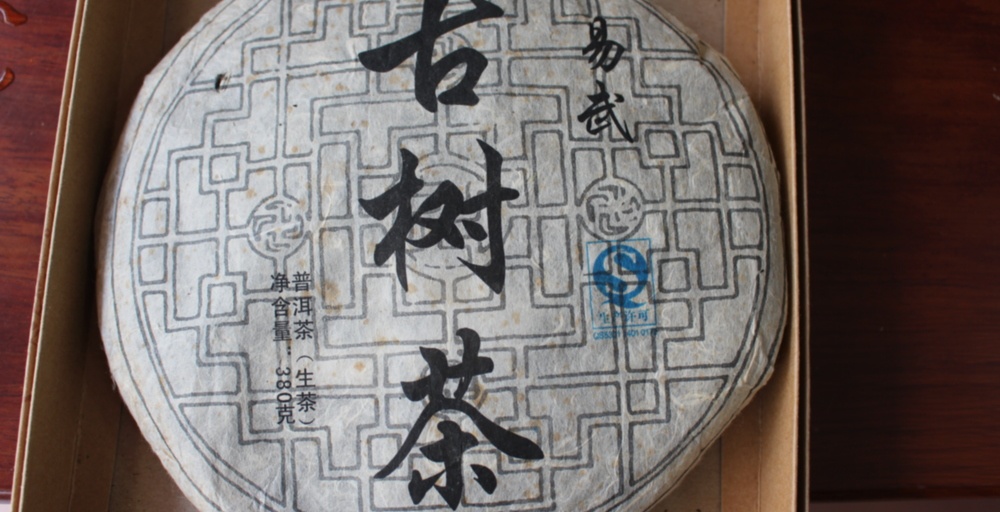 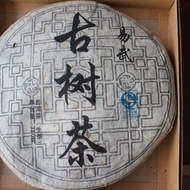 by Yiwu Mountain Tea
--
You

100% Yiwu leaf – blended from gushu trees located around different sub-regions Yiwu. Has a nice full, balanced flavour and has classic Yiwu traits such as thick smooth liquor, sweet with huigan, and lacks bitterness/astringency compared to other regions.

My first sheng by Yiwu Mountain Tea. They specialize in generally quite high-end productions, and while not exactly cheap at 50¢/g, this represents more of an entry-level tea in their lineup. Like the 2016 Yiwu Gushu Ripe I reviewed previously, this sample was also acquired through The Tea Guru. More so than the ripe, this tea had quite the dank nose to it when I received it, which is the main reason I let both of these samples sit for close to two months before sessioning them. Upon taking the sample out of my pumidor I must say though that any traces of the humid nose were gone and all I smelled was a perfectly clean aged aroma.

Before writing these notes I actually sessioned the tea twice and finished my 20g sample. For the first session I used 8g in a 120ml silver teapot and the second 12g in a 180ml teapot made from clay from Dehua. The results were interesting, so I will start with the silver. I did a short rinse for under ten seconds followed by a rest of five minutes or so. The aroma of the wet leaf was again clean like the aired out dry leaf. Creamy, woody aroma. I followed up with a total of a dozen steeps, the timing for these 15s, 15s, 12s, 15s, 18s, 20s, 25s, 35s, 50s, 80s, 2 min. and 3 min.

My face grimaced in disgust upon taking my first sip. It is almost ironic that while I seem nearly immune to the wet pile taste in shu pu’er, I have practically an allergy to even the slightest whisper of humid notes in sheng. This tea had a certain sourness in its initial steep that did turn me off. It wasn’t nearly as bad after that first sip, but my first reaction was that of disgust. Getting past the initial reaction, the general taste was sweet, mineral, sour and astringent. Big, creamy body.

The sourness persisted for one more steep, but after that it was more or less gone from the tea. In direct sunlight and a glass cha hai, the color of the liquor appears a gold with an orange tinge to it. In terms of strength the tea seems to brew up slightly bolder than your average Yiwu. Practically all of my steeps in silver came out tasting very mineral, which I’m generally not a fan of and wasn’t a fan of here either. The tea showed hints of developing dry fruit in the background at various stages and had an inherent drying quality to it that kept building to intense levels over the course of the infusions. This is honestly one of the most drying sessions I’ve had. The initial bit of slight sweetness quickly drops out and doesn’t return to the tea until toward the very end. What surprised me actually given the region and storage is that I got some bitterness in the middle steeps. Not terribly much, but it was there and sometimes persisted long after swallowing.

In terms of qi, I did feel the tea for a short while in the early-to-mid steeps and even felt a bit drunk for a bit, but this quickly passed and I didn’t really feel the tea after that aside from some heatwaves later on. My notes have very few mentions about the body and only that it’s medium, so it must not have been particularly noteworthy. I do specifically mention there being nothing noteworthy about the texture. Around the eighth infusion the flavors began tapering off, but at the point where I stopped the tea was still going and I imagine it could have carried on brewing out mainly sweet for at least a few more infusions still.

Moving on to the clay, I gave the tea a slightly longer rinse, maybe fifteen seconds, and while there was still a touch of sourness in the very first cup, it was not something I’d describe as nasty or even something I’d recognize as humidly stored. Very clean overall. This time I only did ten-ish infusions, but I was using a larger vessel and drinking alone as opposed to with company before. I flash steeped the tea a round or two less than with the silver pot, my steep times mirroring more closely how I typically brew tea in my reviews. The tea showed less signs of slowing down at the point which I stopped than in my first session and gave the impression it could have gone for many more rounds.

Brewed in clay, the tea was way more bitter. My surprise at the tea being slightly bitter in silver turned out to be an amusing comment as it turns out there was a lot more where that came from. I found the texture, body and mouthfeel to have significantly improved, while the prevailing mineral taste in silver was nowhere to be found. While still not an overly sweet tea, there was definitely more sweetness to be found this time around and it did a decent job complementing the bitterness. The bitterness did eventually start to decrease in the middle steeps making way for more sweetness and even some aftertaste and huigan, only to start climbing steeply toward the end.

In terms of taste the tea resembled very closely my experiences with most semi-aged teas I’ve tried. It was bitter, sweet, sometimes a touch fruity or woody. Nothing particularly interesting or engaging. In one steeping I did get some tartness and even some actual vanilla in the finish. I did experience some of the bitterness in the late steeps turning to sweetness, as well as some cooling and a slightly medicinal character to these late infusions as well. More interesting than the taste itself is that I would not have been able to tell this apart from a dry-stored tea.

For me the most notable thing about this session was the qi. Compared to my earlier session with silver where the qi kind of fell off after the first few infusions, this time it remained present throughout the session. I first noticed it in the second cup and by the third while still subtle it was starting to become more heady. After this it became more meditative in the mid steeps and really relaxed my muscles. The feeling of calm it offered here was the best thing about it over these two sessions. After this the qi unfortunately turned more aggressive and the relaxing effect turned to pain in my muscles. This was accompanied by heavy perspiration.

While the mouthfeel and body had improved from my first session, neither was still particularly outstanding. In the past I used to put less emphasis on aroma, but recently it’s started to become a more and more important factor of a truly outstanding tea for me. The YMT ripe I reviewed was exceptionally fragrant for a shu and it contributed greatly to its final verdict. This tea on the other hand I found quite lacking in terms of fragrance. Young teas can often get a pass for not being particularly aromatic, because they haven’t necessarily had time to develop it yet, but in a semi-aged tea like this it starts to reflect negatively on my overall impression of it. Perhaps that aroma is still coming, but for now both the empty cup smell and the aromatic compounds perceptible in the mouth and nose are rather underwhelming.

In conclusion, the differences between the two sessions were interesting. Personally I preferred the latter session brewed in clay as the mouthfeel and body were enhanced and there was more qi. The intense dryness was absent as well. Whether these differences are a testament to differences between silver and clay, inconsistency in brewing pu’er, or variance in human perception, is difficult to say. Thing of note is that disregarding the first infusion or two I found this tea virtually indistinguishable from the dry-stored semi-aged teas I’ve had. My understanding is that Philip Lee of Yiwu Mountain Tea has A/C where he stores his tea, so while stored in Guangzhou, the storage is an example of a fairly controlled humid storage. Those adverse to humidly stored teas honestly shouldn’t be too worried as the storage notes can be brewed out of the tea with a slightly longer rinse or maybe two shorter ones.

Other thing I’d like to point out is that I highly doubt I could have pegged this tea down as an Yiwu in a blind tasting. Honestly to me it tastes similar to the vast majority of semi-aged teas I’ve tasted, but admittedly my experience in terms of aged teas is still fairly limited. Perhaps for the same reason I still find it quite hard to gauge the quality of these teas as none of them have particularly impressed me. I think this one still needs more time as it hasn’t really developed any interesting characteristics that make it stand out. Perhaps there’s hidden potential in these leaves, but aside from the capricious cha qi I found it a fairly standard tea — definitely not worth the asking price for me, not that I was buying anyway.

So a bit of a letdown after the spectacular ripe they produced, but I will have to sample a couple of their more premium teas at some point in the future. To me this came across as a step above budget Yiwu productions and I recall even the product description more or less mirroring that sentiment, but the price is more of an upper midrange / lower high-end production which many would likely be unwilling to pay. The controlled humidity has certainly sped up the aging by at least a few years while still retaining most of the original character of the tea, though, and those seeking an authentic Yiwu to age with a bit of a head start but which doesn’t break the bank might find something here.