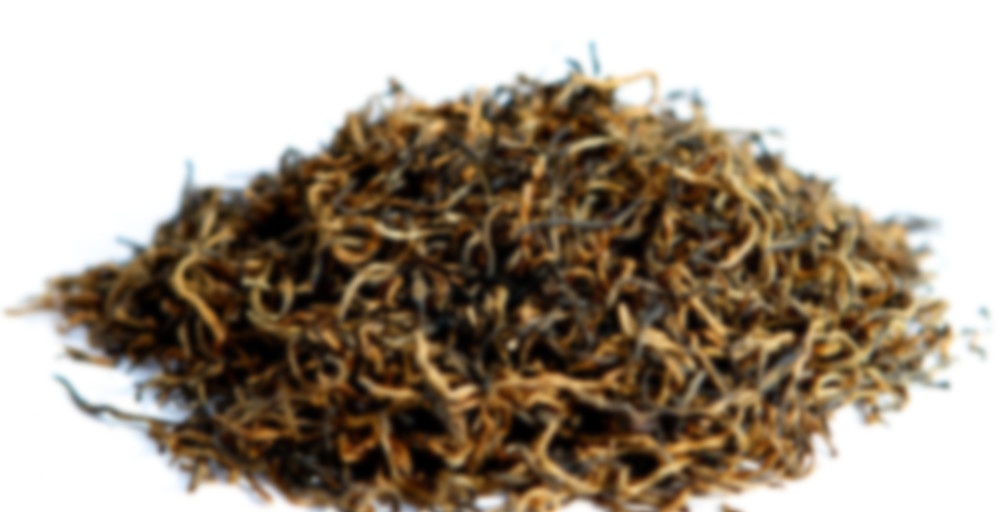 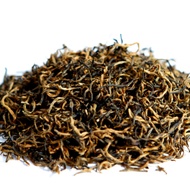 Jin Jun Mei grows at 4,500 feet above sea level, at which altitude there is very little agricultural land available to grow tea. This in large part explains why there is so little Jin Jun Mei to go around. But we can be thankful for the little Jin Jun Mei that is available every year. This loose-leaf tea, like no other, engages your senses at multiples levels: with its complex taste, whose body and rhythm evolve for as many as fifteen brews; its fragrance, which evokes a world of faraway orchids; and the tea leaves themselves, which are shaped like eyebrows perched neatly over dove-shaped eyes.

sipdown! While i enjoy this tea, Jin Jun mei appears to not be my preferred tea. This is a really enjoyable cup, but it’s not what i would be drawn to first. Still, happy to have tried it! I’m really enjoying the Yezi teas!

Such a pretty tea. The leaves are just lovely before steeping.

As normal for me, I completely ignored the 15 second steep time – I just don’t get much out of these short steep teas when I do them as recommended. I steeped 2 teaspoons in 8 ounces of water that was just off boiling. It was fantastic! Lightly malty and sweet with a bit of dust.

I have not tried any Jin Jun Mei from any other companies so I have no basis for comparison in that regard. I have other malty teas that I am equally pleased with so it wouldn’t be a must keep around tea, but if I were placing an order from Yezi, I’d certainly throw this into the cart.

I’ll try resteeping later and see if my unorthodox steeping method harmed the potential for resteeps. :)

Well, unsurprisingly perhaps, it doesn’t resteep as well when you do it for a long time on the first go. :) It’s still good, but definitely less malty and less sweet. Still a smooth tea with no bitterness or dryness.

Short times for blacks often scare me too, but I have one Jinjunmei for which this is my preferred brew time boiling water, 5 second steep, than a slow pour from my yixing sized pot. It resulted in a rich red brew and a caramel like flavour.

I shall have to try as recommended. Sometimes the merchants might know their product I suppose… :)

;) sure but I’m like you, I am suspiscious with short steeps for black teas

I always try it with a small amount first, ie. make 1/2 a cup or less, so that if it doesn’t work out for me I’m not that disappointed. I find it tends to work best with very tippy blacks, but that is just my experience so far.

This tea never stood a chance. The only other Jin Jun Mei I’ve had was from the Verdant Reserve club and it pretty much blew my mind. No other Jin Jun Mei will ever compare. This tea is still enjoyable for sure. It’s not as sweet as I’d like it to be, more of a dry flavor and more woodsy, but still very smooth and complex in flavor. I like the Qing Ping and the High Mountain ones better, though. I have the Jin Pin left to try. Overall, I’m very pleased with Yezi teas.

Such a good day for a comforting pot of tea—it’s overcast and raining just enough to want something warm, a lazy Friday where I’ve gotten enough sleep for once, R only has a half day of work, and I’ve busted my butt all week so I can work slowly today, not too much to do. Tomorrow’s Courtney’s bridal shower, and soon I’ve got to put the finishing touches on our 2 final wedding trips for October. Yesterday’s news of the Pope has me feeling hopeful and surprised still. Working through Breaking Bad and reading today from the Times they’re auctioning off set memorabilia makes me sad and affectionate all over again about Gale’s notebook and Walt Whitman’s poetry—his books always seem to be inscribed and weirdly pivotal to people (Remember Monica Lewinsky’s copy? Right around when that was happening I was in the hospital for an extended stay and the one thing I remember my mom bringing me that helped me get through it was my well worn underlined and margin-annotated copy of Leaves of Grass. Then there’s Dead Poets Society…). Anyway, feeling pretty good.

These leaves are pretty dry, long and golden. There’s a satisfying quality to this tea that works really well with my mood and the weather. It’s got hints of woody astringency like a darjeeling/Nepali tea, but it’s also smooth and carby (while staying medium-bodied, not too thick) with a faint orchid thing going on. As it cools to tepid, it gets quite noticeably sweeter which I like.

Thank you Yezi Tea for a free sample of this tea!

This tea tastes very much like Zhen Qu from Butiki. It has the same honey notes that I usually interpret as mushroom flavored. It is a delicate black tea, not the least bit bitter or astringent. This is a good quality tea, but not the type of black tea that I personally favor.

This sample comes from KiwiDelight. Thank you!

I tried this back in December when i was first starting to taste straight black teas. It is interesting to read what I thought of it then. I am really enjoying this tonight. I didn’t realize this was such a rare tea. This is coca, with hints of caramel and honey. It is really hitting the spot! Thank you for sharing one of your favorite KiwiDelight. I am glad I got to try this one again.

This is expensive, I keep only one brand in stock. So good!

Thanks to KiwiDelight for this! I think it’s a sipdown, but perhaps there’s another small package somewhere? I am feeling a little disorganized since I thought I sipped down Canal Street Carnival and then found a whole other bag of it.

This tea has a lovely cocoa scent. The dominant flavor is malt with a hint of cocoa. It’s a great fall/winter/cozy tea. I got about 4-5 steeps out of the leaf, gong fu style using boiling water per website instructions. And it didn’t make my stomach hurt like many black teas do! Huzzah!

Um… This is weird. This tea bears no resemblance to the jin jun mei sample I had from Yezi about 8 months ago. It came in one of their $6 sampler sets, but I’m not very happy that I just ordered 4 more ounces because of the 20% off sale. Even at 20% off, it’s a lot more expensive than what I would normally spend per ounce of tea. I remember this tea being sweet — tasting like sweet potatoes and marshmallows. I’m not getting any of that now. It’s more bitter, not as complex or interesting… And if anything, I probably steeped it at a higher temperature for a longer amount of time back when I tried it before, so it’s not an issue of steeping at a higher temperature.

Yezi just sells it as “jin jun mei.” They don’t include a year or harvest season on the packet — at least not on the samples, which are all I’ve tried so far. So I have no idea whether this tea was grown in the same place, or whether the harvest time was much different. But this is not nearly as good as the jin jun mei I remember. It’s not bad, but it’s sort of a generic black tea with nothing special about it. Not cool, Yezi. I got this because I thought I could at least count on it being as good as the last product — and similar to it, if not identical.

I’m mad at myself for buying several ounces of this before making sure it was the same jin jun mei I wanted. I’m gonna cross my fingers and hope this was a mistake in the sample bagging.

Had it this morning with my attempt at French toast, sans milk.

This smells go good. Mostly like yams, and some cocoa. There is a nice malty chocolate flavour with hints of dried fruit (apricot perhaps). Still one of my fave morning teas.

Quite nice. This is the only Jin Jun Mei I’ve had so I’m unable to compare it to anything, but I thoroughly enjoyed it. I didn’t find it as anything terribly special about it, just a nice cup of black tea with typical malty notes of grains and cocoa, but enjoyable none-the-less.