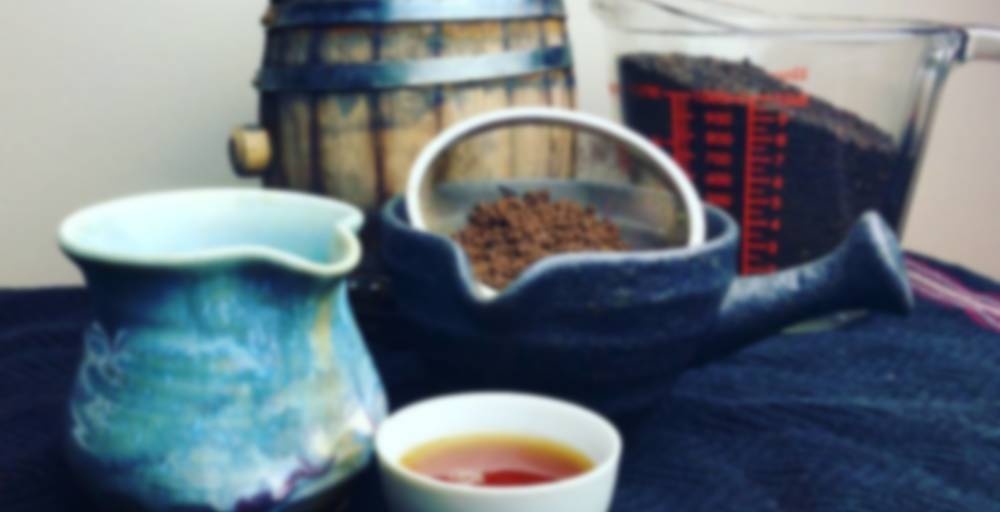 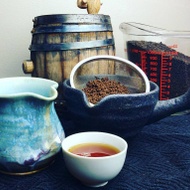 by World Tea Podcast
79
You

Another from Dark Matter 2016. It smells like navy rum, straight out of the bag, and fortunately it doesn’t lose that once brewed! I was a little surprised by the leaf, which is finer even than CTC – more like powder than anything. As a consequence, it brews up pretty dark pretty quickly. Not to worry, though, because it’s incredibly smooth with absolutely no bitterness or astringency. I get a sweet malt base, a prominent rum flavour that dominates most of the sip, and a touch of spice towards the end of the sip. Mostly, though, this is about the rum. I’m glad for that, because it’s delicious.

If there’s a good way to drink rum at work, this is it!

This tea frightened me, for I was pretty sure I was going to hate it. However, I decided to finally walk through my fear and gongfu the darn thing.

I grabbed my shibo and prepared for the worst. I opened the package to reveal ctc grade black leaves and some crimson pieces scattered throughout. The leaf gave off a strong rum and malt tone with some dark cocoa nibs along with a rich, warm, and spicy background. I warmed my shibo and dumped what I had inside. I lifted the lid, and I instantly thought of hot hard apple cider, or perhaps hot apple cider spiked with rum. It was a very intense tone. I did not wash the leaves. The brew was a deep dark red, but I gave it a sip, and I was quite surprised. The tea was actually quite good. The initial taste was dry cocoa, hard wood, and apple cider, except less on the apple part. The wood and spices were very intense. The aftertaste is what hooked me; it was an oily and heavy taste of sweet raspberry, blackberry, and dark cocoa. I could only not a slight run taste, and it stayed towards the back. The next steep intensified the wood notes along with some spice, also the brew became significantly drier. Towards the end, the brew was a bit too aggressive, but it still carried the sweet berry aftertaste. This was an interesting tea!

I got my gaiwan all ready and my water started for this tea, then opened the bag and poured…powder…out of it. Didn’t realize it was a ctc black! I didn’t really have my Western setup with me, so had to improvise with a kyusu.

The dry leaf smelled like Blackberry or prune, rum, and a bit of malt. After I put the tea in a warmed teapot, I got spicier notes, as well as some cherry and licorice.

The first steep, at 90s, was very dark in color and sorta frightened me. Thankfully it wasn’t bitter. Got woody notes and licorice along with some berry fruitiness. I also got rummy notes, and as the tea cooled, the spice became more apparent.

Second steep was 2m. It was drier and woodier with oak barrel and vanilla notes. It was also less fruity and I didn’t get any licorice.

Third steep was around 5m. It was weaker and a bit bitter, with light fruity echoes. Didn’t go beyond this, because as a ctc tea I don’t think it would have gotten any better with more steeps.

I think the best way to drink this tea would have been to Western it and just brew the fuck out of it for one good teapot of it. Maybe add small splash of milk.

It’s suddenly changed to being cold and dreary today so I thought it would be a good time to try this tea. I saw a few recommendations to brew this western style and upon opening the package I see the tea is small broken leaves so I definately wanted to use my For Life brew mug. The tea itself is dark and uniform, nothing appeared to be added. The smell was sweet and spicy and reminded me of either a pastry or spice mix I had once. I can’t quite place the memory, isn’t that infuriating?

To prevent bitterness I only brewed 3 minutes. The tea itself is rich and malty with a bit of chocolate and chestnuts. There’s a bit of spice at the beginning and also an end note much like the smell. I imagine that’s the rum? I have no idea what that tastes like…but it’s very good. I ended up with almost no bitterness or astringency, it was very smooth. I guess you really need to watch your brewing times with this one.

SUPER BITTER, but the flavor is interesting. It’s like a woodsy rum chai. Even after a five second flash steep it was bitter. I had to add creamer and it was pleasant. I’m honestly not going to finish a cup because of the astringency. Even the coffee I have is less bitter and roasted…but that coffee is rum, caramel, butterscotch flavored.

I’m glad I tried it, and it certainly woke me up this morning because it was a kick in your pants tea.

I’ve been wanting to finally start drinking/reviewing the teas from the Dark Matter 2016 series; therefore, I decided that this would be a good one to start my day with before heading to the Asian Market in Cleveland, Ohio. My wife and her friend had planned this mini trip a few weeks ago, and were hoping that I’d go, too. It was pretty swell, if I must say so. We ate plenty of great food, as well as ventured throughout the markets there.

Anyway, the tea was okay. I’m not too into black teas anymore, unless they’re flavored or have cream/sugar in them. The aroma to the dry leaf was pretty splendid, though. It had a nice malty, rum, sweet—almost vanilla—scent. However, the flavor was alright. I gave it three steeps before quitting.

Overall, the tea was pretty malty with a nice rum aftertaste. I just prefer something other than a black tea. I think this would’ve been better Western style brewing, for 3 minutes, with a splash of cream. However, it wasn’t something that I’d consider unique enough to want more of.

Side Note: I was able to try some solid Asian cuisine: Beef and Tripe Soup (
https://www.instagram.com/p/BEjLDnjg-yc/)

And came home with plenty of tea and snacks for the week (https://www.instagram.com/p/BEjhgiqA—E/)!

So I pull out this, W2T Last Thoughts. And some 1991 oolong… My friend picked this out; damn coffee people liking their strong bitter teas!
Anyways, the first three steeps had a nice rum taste to it and yes it smells better than it taste… But it’s a fun tea.
I’m not a fan of this type of black tea so I sipped a little . My friend really enjoyed it though which makes me happy. I always try to spread my enjoyment of tea to others because after all I believe it’s a healthy thing to so; set time aside to relax and sip on something that taste good and also provides and experience.

P.S. typing reviews on a phone is not easy

So you can drink the spices straight as its own tea? I haven’t tried it yet. Nor have I looked up how to serve it online, obviously.

This is a tea that was aged in a barrel that was once filled with spiced rum.

I tried this with my Gaiwan; it didn’t workout so well. Anyway, I think that the flavor was ‘okay,’ but the smell was splendid. I noted that, “It needed to be brewed Western style, with a bit of milk.” I did like the rum notes, though.

The dry leaf actually smells like rum or brandy, which is something I’ve never smelt in tea before. Leaves are like fannings so infuse quickly. I opted for shorter infusions than the recommended 1 minute. During tasting, the rum is less overpowering and very pleasant, with some wood and spice alongside.