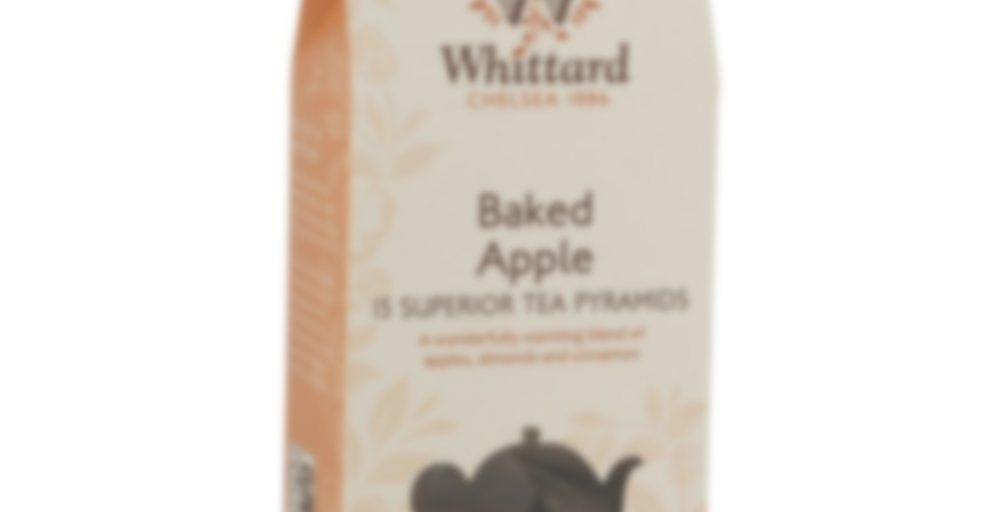 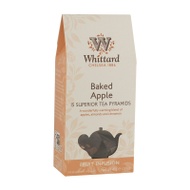 by Whittard of Chelsea
73
You

A wonderfully warming blend of apples, almonds and cinnamon with flavours of hazelnut and cream. A perfectly balanced caffeine free infusion that can be enjoyed hot or iced.

Thank you MissB for the sample!

This one came in a sachet, and I definitely brewed it up in a smaller mug than I typically use because there definitely didn’t seem to be enough leaf in the sachet for a normal Roswell-sized cuppa. I was even sort of skeptical about the size of mug I did go with – 8 oz. Surely it wasn’t enough leaf bits of apples and stuff for a rich or defined flavour.

My expectation was that it’d be a “Forever Nuts” type of tea (Anyone know what the ‘original’ Forever Nuts blend was? Is there even a way of knowing?) but it was a little bit different than most incarnations of that blend which I’ve tried – and I’ve had several at this point. For one, I didn’t really taste a lot of nuts. Maybe a little bit of almond but I’m stretching here. It was mostly apple, actually, with a bit of cream in the finish. And not even a super cider-like apple flavour that some of the ingredients in here, namely the cinnamon, would lend themselves well to.

I was almost instantly reminded of those dehydrated apple chips that seem to be kind of big in grocery stores now. I know the one I work in has variations in the Natural Source, chips and produce sections of the store. If you don’t know what I’m talking about these are the ones I’m thinking of in particular:

Now, to be fair, the only ones I’ve actually tried are the Fuji Apple but it tasted like that to me! Very fresh and strong apple flavour, but no “juice” component. Side Note: The chips themselves are really weird because they are crunchy like a potato chip. That is, until you start to chew them! And then the apple-like texture comes back and you wind up with a mouthfull of spongy, apple mush. If it weren’t for the weird texture I think I’d actually like them.

But anyway; the tea was alright! I liked that it wasn’t totally like Forever Nuts – but I also think that was the intent so in that regard it missed the mark a little bit? But even still; even though it made for an interesting apple tea it wasn’t a mind blowing one either. You’re possibly better off just trying the weird dehydrated apple chip things…

Another tea from MissB! Thank you so much. :)

There were just two tea bags, so I made up 12 oz for me using both bags. Muahahaha.

It smells delicious. Apple and cinnamon and very nutty. I added a little honey again, because that’s how I’m feeling today.

Sipping it, I REALLY taste the chicory. OMG, this is tasty! IDK that I’d want a lot of this, but wow this cup is good. So much baked apple, chicory, nuts, some cinnamon. Mmm… Probably helps that I’m super hungry right now. :)

Thanks again MissB! I wasn’t sure what to expect from this tea, but I was actually pleasantly surprised. A nice apple tea, with just enough sourness to make it a tart apple, and just a hint of spice. I’m quite impressed that it does indeed taste like apple. Not a tea I need stocked, but I would definitely drink this again! I do wish it was looseleaf, though.

Also, resteeps decently, though I’m only doing so the one time.

Another from missB honestly, so very generous and i’m really looking forward to sharing these teas with the tea gals (and guys!). Super exciting to get packages in the mail from her travels and a great tea journey for trying new things. Makes me even more excited for someday getting out there with my other half…once my cupboard is mostly empty and in need of restocks lol I half expected this tea to be similar to David’s TEas apple custard thing..but this one doesn’t have that weird after taste and the apple is much more baked goods like lol thanks for the share again MissB!

yeah..she’s galavanting around the world, sending back tea for me to share with everyone heh

Aw, you guys rock. These solo bags of Twinings were a great find.

This is my third go at this one. I’m still not sure what to think of it. At first I was too shocked by the sourness to notice anything else. I certainly didn’t expect that – I’m not very fond of sour teas. I tried twice to sweeten it with honey but instead of eliminating the sourness it just made me gag. But –

This time I mentally prepared myself for the sourness. I decided to keep the tea bag in longer than the package suggests, and I think it did the trick. Tasting it now I realise that it actually tastes exactly like it should – it tastes of baked apples. When the tea hits the tongue it’s still shockingly but not unpleasantly sour. As you begin to swallow you can taste the cinnamon and the pie crust. Wait, pie crust? Baked apples, not apple pie! I must’ve meant the almonds, hazelnut brittle and the mysterious “flavourings”.

It’s not the kind of tea I’d drink to calm myself down after a stressful day. This is more of an interesting gourmet experience. I still have 12 tea bags left – that’s pretty good conditions for falling in love.

I really like this one, it’s very delectable especially if “oversteeped” a little. The time recommendation about steeping that the packaging says is not enough for all of the flavors to be released. It’s a simple but lovely fruit infusion.