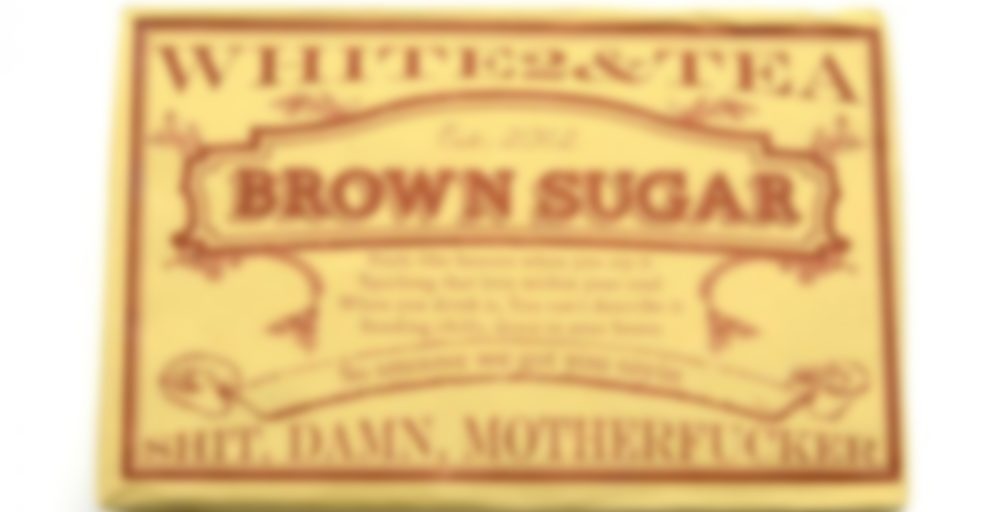 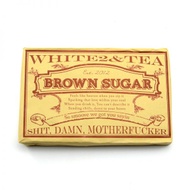 The 2016 Brown Sugar is made from a large percentage of huangpian [the largest leaf used in Puer production]. The soup is sweet and smooth, with a light and approachable character. The blend has a larger percentage of smaller leaf material than the 2015 blend, as well as the incorporation of several regions.
Each brick is 200 grams.

So this does taste like brown sugar! Kinda biscuity too. And yet, very light and refreshing. I could see this as a daily drinker.

Thanks so much for a sample of this one a while ago, Meowster!  I’ve really let this sample linger with such high expectations.  :D  I took a break from my holiday teas today!  I used 4.9 grams for a mug (measured by Meowster- thanks!) which was probably a lot for a mug, but I really love my deep pu-erh anyway, so I went with the entire sample.  Sometimes I’d use an entire Teavivre sample for a pu-erh and those are 7grams… so 4.9 grams isn’t the most I’ve used before!  There is certainly a sweetness to this pu-erh and it’s certainly dark.  No noticeable negative fragrances or flavors.  I could swear it does have a note of brown sugar— sure I’m being convinced by the name, but it just is.  The second steep is starchier and biscuity but still sweet.  I could tell the third steep was losing much of its strength and the fourth steep was even weaker than that. So I’m glad I don’t regret using the entire sample. If it happens that the lower quality ripe pu-erh is the darkest, then consider me a fan of those. Not the most amazing pu-erh I’ve tried, but ALWAYS thankful for trying.
Steep #1 // 4.9grams for a full mug // 16 minutes after boiling // rinse // 2 minute steep
Steep #2 // 11 minutes after boiling  // 2 minute steep
Steep #3 //  just boiled // 3 minute steep
Steep #4 // just boiled // 10 min
2019 sipdowns: 83 (This + oldest Bird&Blend Snowball)

10g, split over two days, both done grandpa style in a 500mL tea thermos. A moderate shu, really heavy on a soapy, floral character that I’m not that into. It’s not particularly thick or sweet, but smooth and dry, like cocoa husks or french roast coffee. I guess for the cost, this is reasonable, but it’s not particularly remarkable. The second of the sessions, I steeped twice, and boiled for a third, but couldn’t squeeze that much out of. It’s fine, but there are better modern shus out there at this price point.

“So smoove we got you sayin SH!T, DAMN, MOTHERF$CKER”
Amen to that, 2Dog, amen to that!
It’s been a while since my last shou indulgence and, boy, I enjoyed every last drop of it.
It’s smoove alright, and it’s sweet and creamy. Balm for the soul it is. Just a touch of wood and that lingering brown sugar goodness. Mmm, mmm, mmm. It’s the simple things in life y’know.

This tea is exactly as advertised – sweet, light, and smooth. It even tastes a lot like brown sugar. That said, I don’t really enjoy this tea. It just doesn’t hold my interest. It is really nice grandpa style though, more mineral notes.

While I have enjoyed some puer’s lately, its been a while since I’ve written a review of a new one. Today is so cold outside, I wanted something thick and warm to heat me back up. What better than trying a new a shou I’ve been resting?

The piece I received is a dark walnut brown, the leaves compact but fairly easy to split a piece off of. I only created a small amount of dust, happily. The dry leaf is brittle and smells sweet, dark, a rich earthy aroma that calls to mind a bed of dry forest leaves and mushrooms.

After two short rinses, the compact chunk has fallen apart into thin, rectangular leaves — not quite fully open yet. The liquid itself is a rich color reminiscent of coffee, although far more pleasant in my opinion. It smells similar to the dry leaf, whereas the wet leaf calls to mind the same scents but heavier on the mushroom side and more wet.

1st cup, 10 sec: Mmm exactly the heaviness and warmth I needed. Throughout the sip, it is smooth and rich, the heaviness starting in the middle and bearing in on the end of the sip. I don’t taste any bitterness, not even a trace; instead its sweeter, the aromas brought to life as taste, although more on a woodsy side than a dirt/leaf side.

The 2016 brick of Brown Sugar I received is less compressed than the 2015.

Breaking it up produced small bits which feel dry and brittle, one has to be careful not to create dust.

The soup is dark and very earthy with a little cloudiness which should clear with longer storage. I enjoyed the sweet notes.

So, this afternoon I’m doing a side by side competition style tasting of White2Tea’s 2015 and 2016 Brown Sugar pu’erhs because I recently purchased samples of both. I’ve tried different years harvests of the same tea, but I’ve never really done a side by side compare before and I thought that would be interesting – especially in the case of Pu’erh.

For both tastings, I’m using 2.2g (because that’s what I broke off from the first cake, so I kept it the same with the second) of Pu in 6 oz. of water – both steeped for three minutes using 95 degree Celcius water. Consistency, bitch.

So without further ado…

Dry Leaf: Comparatively, this seems to be less compressed. The cake breaks up much more easily; though the pieces are smaller/more brittle. Same sort of leaf colouring, though.

Liquor Colour: A dark brown with red undertones. It has a very slight cloudiness to the liquor but overall is pretty clear. Noticeably darker in colour than the 2015 Brown sugar. Not nearly as dark as I’d expect the liquor for a Shou to be; but certainly closer in ‘generic Shou appearance’ than the ’15 .

Aroma: Aroma is stronger overall than the ‘15 and has more presence. It’s very earthy, with a bit of a mushroomy quality too. Has an almost molasses like sweetness.

Taste: Immediately this tea feels more full bodied than the ‘15. The top notes are very earthy/loamy and evoke immediate, intense feelings of wet wood/the forest floor. Body has a little bit of a mineral taste, and some sweetness. It’s also a little woody, not unlike the ‘15 but in a more wet way. Undertones are a little fruity; sort of date like I suppose. While the top of the sip is very unctuous, the finish is short, clean and without lingering flavour not unlike what I experienced with the ’15. It’s interesting to me how this tea is so similar in the second part of the sip to the ’15 but so wildly different at the start.

Having tasted both years now, this is the one I think I prefer. It’s not arguable that there are a lot of similarities, but I think this year has more overall body even if it finishes in the same sort of way that the 2015 does. Plus, something about that more wet, petrichor feelings foresty note that this starts off with really does something for me. Both are very smooth though, and I think would make really good every day drinking type teas.

Link to 2015 Brown Sugar from this tasting: