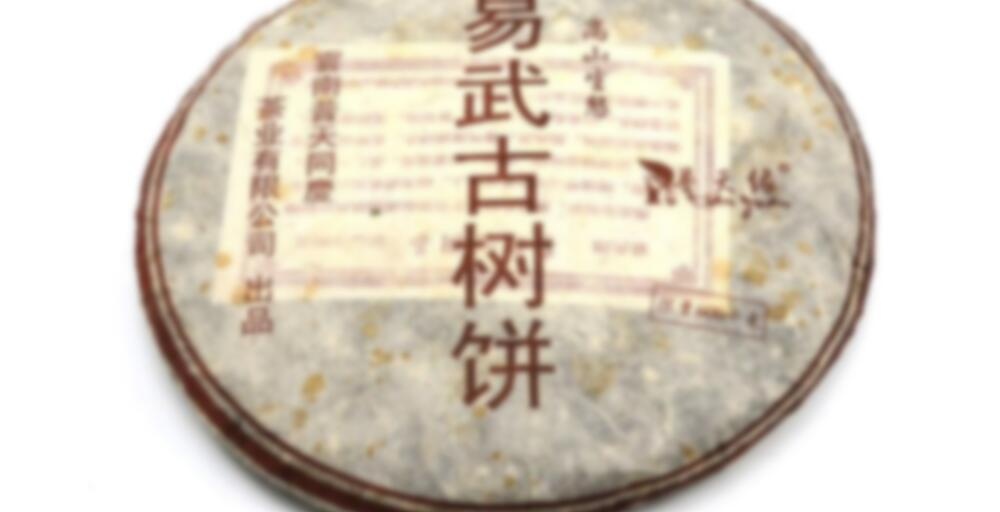 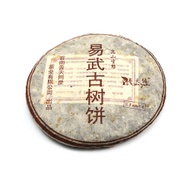 This Yiwu tea is made from 2009 Yiwu material, pressed and then stored in Guangzhou natural conditions soon after pressing.

The wrapper says “Yiwu Gushu” [old arbor tea] among other claims, all of which should be taken with a grain of salt.

Unlike a lot of other teas in a similar category, this one is very well balanced. It is probably a bit more expensive than what I’d be happy to pay for a cake though.

It has aromas of wooden cabinet, wet earth, water lilies and some medicinal ones. The taste is tart and fruity with a crisp vegetal note appearing throughout the session and a bitter finish. I can taste dates and honey, although the profile is not very sweet overall. In late infusions, the taste is quite spicy too. The aftertaste is dry and has a perfume-like quality with notes of peach skin, wood, and black pepper.

Body is medium to light, but the texture is at least a bit interesting. The liquor has a coating, cooling and slightly numbing mouthfeel with good astringency. As for the cha qi, I found it to be quite heady and elevating with a mild body warming sensation.

The first infusion has an almost buttery taste to it (reminds me of green oolong), lingering a little in the next few. Lovely mouthfeel and no bitterness at all in the early steeps. Not much sign of age but very smooth and certainly not rough young sheng anymore. Bitterness at a nice level, balanced with a good sweetness, in the middle steeps, though with quite a bit of astringency that leaves the mouth a bit dry.

Leaves have dusty hay smell. Soup color is gold just starting to brown. The texture is very smooth and not very thick. The taste is light and soft. Mild sweetness with just a touch of bitterness (esp in middle steeps). Slight woody aged taste. Mild huigan. Noticed mild chi after 4 steeps. Easy on the stomach. Not something I would write home about, but for an aged cake, this might be one to add to my collection since it such a reasonable value ($.18/g).

Just tried a sample of this one that I picked up a few months ago. I’m fairly certain I want a cake of it now. The dry leaf smelled a little bit aged, with a slight leather aroma. After a rinse, it was more fruity or floral, with straw and a sweet vanilla aroma. I also got a bit of some kind of spice, maybe cloves…hardly detectable.

For the first 7 or so steeps, this tea had a slight vegetal front, followed by a pretty intense sweet finish, exhibiting flavors of vanilla, milkiness, and slightly floral. Combined with the nice thickness, it reminded me of the mixture which you dip bread in to make french toast – a little bit eggy, like I was drinking cake batter. Sometimes, seemingly at random, as I wasn’t really varying the infusion time in these early steeps, the flavor would be a slight bit woody or barky and drying before the sweet finish came through.

The second part of the session, which I took to nearly 20 steeps, was a little bit less vegetal with sweetness that was less intense. The flavor at the front of the sip was a soft fruitiness, which was followed by a thick sweetness with now a little bit of honey to complement the vanilla notes. I could sometimes pick out apricot from the fruity flavors, but sometimes not. Around steep 8, I felt a bit of qi starting to rise up from my stomach, but that wasn’t a heavy component of this tea for me. The tea continued much the same as this for the remaining steeps – it was a really enjoyable session.

I’m glad I decided to sample this along with W2T’s 2016 lineup. It seems to have a good head start in the aging department, so I could see myself (if funds allow) picking up one cake to drink whenever and one to just stash in the back of my pumidor.

> I could see myself (if funds allow) picking up one cake to drink whenever and one to just stash in the back of my pumidor.

I did this when he first listed it, and the one “to drink whenever” has wound up getting stashed with the other one. For similar prices, there’s a lot stuff with 10 years of Guangdong storage already.

I really liked the sandalwood combined with the honey-ed dried fruits. I’m also debating purchasing a cake. The price is right.

I would definitely recommend for the price. It is a very good and smooth tea and its not bad at all for the price considering the age. Tanluwils if you want to put an order together let me know.

Oh god I love this stuff. I received it from White2Tea tea club and left it to air out for weeks. When I finally decided to brew it, I was completely hooked. This semi-aged tea just hits the right spot with its honey sweetness, which lasts through the whole session. The beautiful golden liquor had a very smooth mouthfeel and I experienced very slight bitterness only in second steeps, but otherwise there was no bitterness at all. I will definitely order a cake of this later as I don’t have any of the tea club sample left. I need more.

Second session with the sample from the w2t monthly club. 5g in a 70 ml gaiwan, yielding about 40-50ml per brew. This is a solid example of a mid+ quality yiwu after its first step in the maturity cycle. Sweetness of youth with the profile of a bit of age. Top notes that hint at berries and citrus fruit with a hint of vanilla/baking spice. A solid mid-palate of wood/ sandalwood incense and wildflowers, and a base that falls just shy of tobacco. Smooth and complex.

The brew softly embraces the palate before a huge wave of aftertaste brings on lots of salivation, massive and persistent cooling, and never ending honey sweetness. Throat characteristics were okay, mouthfeel was on fleek. Qi is grounding and heady. Lasted about 11 brews before switching to long brews. This one is out of my price range unfortunately, but I think it is appropriately priced for the quality. Def yiwu. Def delicious.

This is a very tasty raw puerh that has not completely lost it’s young sheng sweetness. There was a little bit of bitterness initially but not much. It quickly smoothed out. It was clearly dry stored as it has no wet storage taste to it. That in of itself seems unusual for White2Tea. I got this with the club package and am just getting around to trying it. While this would be a good one to buy for some further aging I am not sure if I will buy it or not. It was good though.

Excellent. Today I ordered a cake of this tea.

You beat me to it. I have this one sitting on the counter. Got to pick another now..

I had a taste of it after airing it a bit, this one is good. It has age to it and still feels like it will age well. I have to actually take notes, I just wanted to try it, I feel like Paul has a very specific preference in his YiWu Sheng and I feel like I could drink his Shengs blindly and know they are from his collection (probably not in reality LOL).

This was about my 4th session with this tea, probably the best one yet. I was getting a nice full mouthfeel with perfumey sweetness for probably a half-dozen steeps. I kept hitting ‘reboil’ to keep the water temp up.

I could wish this tea had more longevity, or more strong steeps in it, but it really is pretty good.