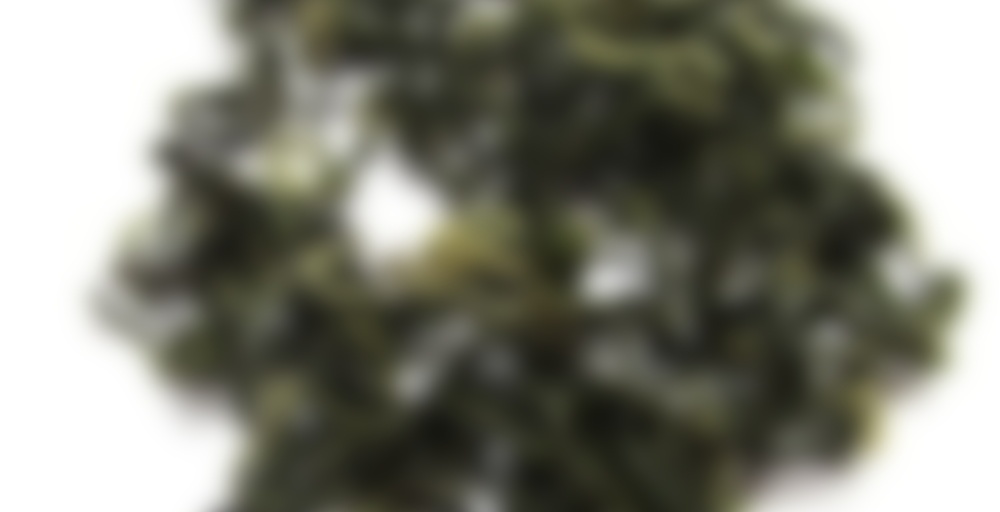 A green tea interestingly produced with the cultivar Fuyun #6, normally used in the production of Jin Jun Mei. It has a smooth grassy taste which transitions into a nutty finish, with cool mint notes developing in later steeps.

Today is the one year anniversary of me buying this house! Which was around the time I fell really behind on reading Steepster reviews, hense the year-or-so backlog I have to get through. It will also be the one-year adoptionversary for my kitty Chiya in a few days (PRIORITIES… bought the house to get a cat!) and sadly, I have to get her booster shots. I will certainly make it up to her with a special treat and I already replaced her favorite mouse that she went Mike Tyson on by ripping its ear off (and it probably won’t be long until she destroys this one… she’s a little black death machine!)

Still trying to get through my 2017 teas, which are my oldest (I got into tea late in 2016 and did a lot of bulk orders in 2017 in my enthusiam!) I especially have a lot of pure origin teas from that time, which is sad I let them get so old, but c’est la vie… Here is another from that old What-cha order, and it was a big bag! Oof, this will take a while to sip down… I’ve already made one cold brew batch and will probably be doing that a lot to work through the bag, but right now I have a warm cuppa to sip with my classy microwave eggroll lunch. 2g in 175F water, 2 minute steep.

I have tried other Bi Luo Chun’s in the past. The aroma of this one smells very floral, which my (admittedly poor) memory doesn’t recall any of the others I’ve tried being particularly floral (they were always a very savory vegetal flavor with a strong beany note, with some variances on that between the different ones I tried). I’d have to look through all different iterations to see if any of them struck strongly floral… I do smell that “beany” quality as well, though. First sip, and this definitely does have a florality to the flavor… smooth, a bit like the lilac/orchid flavor in green oolongs, not heavy or perfumy. The vegetal quality is there, and I am definitely getting that bean note lingering on my tongue after the sip. The vegetal flavor is a bit like peas/pea pods, green beans, and black beans, and comes across very savory/umami. I know I’ve had a few Bi Luo Chun that had a “meaty” taste in the past, but I’m not getting that here from the umami quality… perhaps because of the florality of the tea.

Thanks! It was a week ago now but was really nice… I spoiled the cat as cat mommas tend to do! (Though to be fair, I also put in a rather large tea order for myself when I’ve been barely ordering tea this year, as well, to mark the occassion, hahaha. I should’ve bought a piece of furniture or something since even after a year it is still a little barren, but, ah well!)

I no longer own, but when I moved cross country and back home several years ago, my place was not ‘put together’ for over a year; the cats, however, had everything where it needed to be and then some. : )

It’s put together enough to be perfectably “homey,” and I figure I have plenty of time to “decorate” over the years. I feel especially thankful I have this place at the moment; my best friend (toddashi/Todd here on Steepster) lives in California and was evacuated due to a lightning strike fire in the Santa Cruz mountains, from a home he bought maybe just a month after I bought mine (hasn’t even quite been there a year yet!) He’s having to live out of a hotel right now with the fear the fire is going to spread and take his home… I’m worrying enough for the both of us right now! A safe and happy home is the best kind. <3

God, I am so sorry to hear about your friend! I hope his home is spared. I had just moved to the Bay area a few months prior to the horrendous Oakland Hills firestorm in 1991. Several friends lost their homes and had to flee with just what they could grab and throw into their cars. California has been badly hit with fires the last few years. Callous as it may sound to my fellow humans, my heart always aches for the wild life killed, habitats destroyed as well as house pets who cannot be gotten to and rescued.

I have a lot of ‘stuff’ (antique tea sets, oil paintings, flow blue ware, books and so on) and even though this is a rental, I work from home so I repainted the whole interior and refloored the kitchen and the bathroom. Those things set me back with unpacking and then setting up each room to my satisfaction took on (as always) a time sucking life of its own. The real joy comes belatedly when you have been in residence for a few years and suddenly realize what a beautiful sanctuary you’ve created for yourself. If you have not read/heard of this book, may I recommend it? Clare Cooper Marcus’s “House As a Mirror of Self: Exploring the Deeper Meaning of Home.”

I haven’t heard of that book, I’m a librarian so when I’m back at work I’ll have to see if we have it!

Thankfully Todd and his son and daughter-in-law left with their two dogs and three cats (they are renting two hotel rooms and have a “doggo room” and “kitty room”). Initially they had to leave the coop of chickens behind, but after making some phone calls the next day and finding a friend who would keep the chickens for the interim, he went back into the evacuation zone for the chickens and got them out. So thankfully all the pets were able to be evacuated, too.

I am so glad to hear that Todd and his animals are out of harm’s way. I hope his home fares just as well.

Mastress Alita: I am so sorry that your best friend is having to go through this! I am so glad that they are all safe now,

White Antlers: i need to look at that book! I do sit quietly in my living room and look around with a great sense of peace. Most of what I have in there was made by us or repaired/improved by us, inherited, or was purchased at estate sales for a fraction of the retail price. I used to follow Danny Seo’s curated home articles and I think we do tend to display things that sparked our interest.

It sounds like your home is very pleasant, indeed!

ashmanra, it’s an excellent book. I bought it when it first came out in 2006 and have used it a lot in my work as well as gifted it to several good friends. There is a copy in my office and another one in my book basket, next to my bed. It can now be found on Amazon for a few dollars.

Your house sounds very pleasant as well-especially since you also have the sound of music in it. : ) Do I recall that a few years ago you wrote about having a beautiful old radio (the kind in a wooden cabinet) as one of your treasures?

I take my cue for decorating my house from this William Morris quote: “If you want a golden rule that will fit everything, this is it: Have nothing in your house that you do not know to be useful or believe to be beautiful.”

I was just thinking ‘not those CA fires again’. Every year. I’m very sorry Todd is so affected by the fires this year. I hope everything works out for them and all the pets.

A couple of great anniversaries to celebrate, Mastress Alita :) Glad to hear todd and his crew are safe and hope his home stays unscathed. I wish we weren’t a few hours apart.

White Antlers: I’m going to pick up that book. Sounds like it’ll fit snugly into the broad subject of interest of how natural and man-made environments effect our psyche and sense of place.

@Mastress Alita, Tell Todd we are keeping him in our prayers. You guys are having it rough out there.

Happy anniversary(ies) (though late)! And yes, tell Todd we are all thinking aobut him here :)

This green tea was something of a curiosity buy for me, as it was produced from a cultivar normally reserved for the production of Wuyi black teas. As everyone who reads my reviews is likely aware, I am a huge fan of traditional Chinese green teas. I, however, also have a big soft spot for odd and/or experimental teas, thus I simply could not pass on this one. In the end, I found it to be a rather likable, if somewhat delicate and temperamental, green tea.

Prior to the rinse, the dry tea leaves emitted aromas of grass, hay, malt, and corn husk. After the rinse, I noted new aromas of smoke, straw, and roasted chestnut. The first infusion then introduced a slight creaminess to the nose. In the mouth, the tea liquor presented corn husk, grass, hay, straw, roasted chestnut, and cream notes chased by hints of sugarcane sweetness. Subsequent infusions saw a citrus presence develop on the nose alongside hints of spinach, herbs, and sugarcane. New flavors of butter, lemon zest, spinach, hazelnut, seaweed, and minerals appeared in the mouth alongside belatedly emerging malt and smoke notes and hints of fennel and umami. The last few infusions were dominated by mineral, cream, spinach, and seaweed notes, though some underlying impressions of sugarcane, roasted chestnut, and fennel could still be found.

After reading What-Cha’s description of this tea, I was expecting it to be minty or at least a little more herbal, but I found it to be more grassy and nutty with a pleasant sweetness and pronounced seaweed notes. That may have just been me, or it may have been due to my decision to use a water temperature that was higher than the vendor’s recommended water temperature. I cannot say for sure. What I can say, however, is that this was a pleasant enough green tea. If it were ever to be restocked, I have no clue if I would go out of my way to acquire more of it, but I did enjoy it for the most part. The only real complaints I had were that it faded rather quickly, and it was neither unique enough to consistently hold my attention nor powerful enough to hold its own against some of China’s other Bi Luo Chun green teas. Honestly, I am glad that I took the opportunity to try this tea, but I doubt I would ever rush back to it. Others who enjoy milder, nuttier, and/or more marine green teas may love it though.