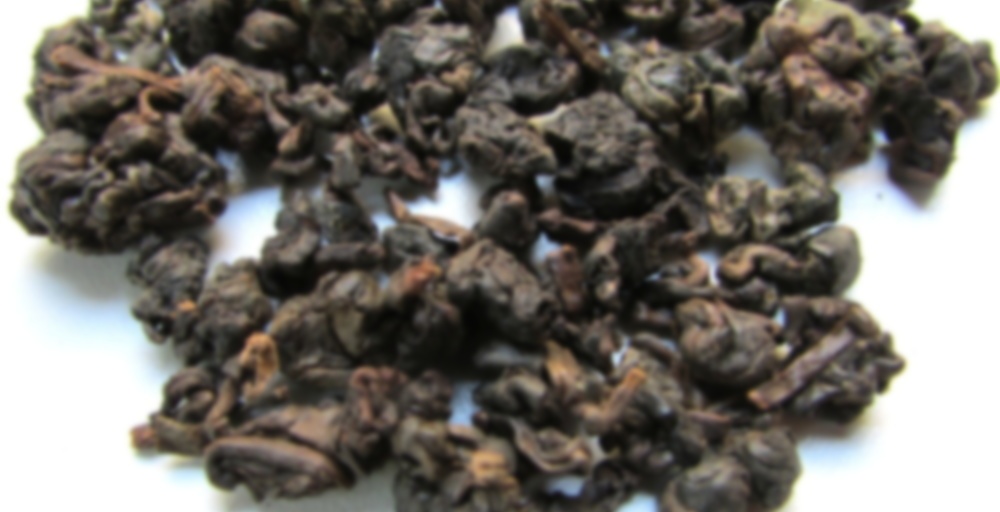 I don’t think there is anything that I enjoy more than a good roasted Jin Xuan. Thank you Derk for this sample. They have been sold out of this one and I wanted to try it. There is a wonderful review on this already by eastkyteaguy so check that out if you want the taste profile. I certainly can’t add to it. lol

So often I fall in love with a roasted oolong only for it to be short-lived. This one lasted many infusions and the taste profile changed as the infusions continued. It was complex with its roasted-toasted goodness, full of fruits like berries and stonefruit with some floral, woodiness, minerals and honey sweetness.

I love a happy tea story!

Filtered Santa Monica tap water just off the boil throughout. Poured from a pear-shaped purple clay tea-pot into a glass cha hai, and served in a porcelain (“peony”) cup.

6 infusions (no wash), 45 seconds to 4 minutes: Marigold to gamboge liquor, a bit of sediment (seems like a lot more in the bag); Deep roast notes in the nose, nutty with a whisper of smoke; smooth toasted sweetness on the palate with hints of walnut and daylily. Some scalded milk notes emerge in the finish. Increasing earth and wood on the palate as you raise the temperature or infusion time; Soft, low astringency if not over-steeped. No char.

Robust, responsive, and clean for a dark roast – somewhat one-dimensional at the moment – this might be a good candidate for further aging (it’s only 1yo at present).

Something about this tea makes me want to ramble.

Spent yesterday late afternoon wandering Golden Gate Park, stopping at Hippie Hill to listen to the drum circle. I laid on the grass and let the music wash over me. It took a while but the percussionists finally got into their groove after some thick clouds of pot smoke emerged from the group. The cool breeze from the Pacific came in short bursts that would trail off and the grass danced, glistening, seemingly in tune with the drums. It was magical, I felt quite high riding the wind and the music. Sucker for cheap thrills I guess.

We later wandered through my old neighborhood and being hungry beyond the point of deciding what to eat, we stopped in the closest Indian restaurant. It smelled weird upon entering. Noped out of there graciously after having our water glasses filled and said sorry, we’ll have to come back another time. That’s one of my city-living life lessons: never eat at a restaurant that smells off. We then stopped at an American Chinese restaurant I used to like because it was right there, no decision to be made in our state. Got a cheap pot of Tie Guan Yin because I’m pretty over restaurant jasmine green tea. Picked the wrong dish to go with my mood and the tea. Spicy Peking noodles. I ended up getting sick last night with a very upset stomach and a raging headache before we even got home from dinner. Guessing too much salt and oil as I’m a spice fiend.

So I rummaged through my tea drawer searching for a glass of comfort, one hand in the drawer, the other holding my heavy, throbbing skull. Found an unmarked tin and upon opening, I instantly knew it was this tea. I thought I drank it all. It was very comforting and calming brewed in a gaiwan but I only had enough tea and energy for a modest grandfatherly brew.

The liquor was so roasty, smooth, sweet and light with a little creaminess. The berry/prune note in this was sooo dark and thick and sweet. Liquid medicine to soothe the soul.

After 3 ibuprofen and a few cups of this in some dim light, I could finally get comfortable on the couch.

I’m dipping into the backlog with this review. I finished a sample pouch of this tea late last week, but as I have not had consistent access to a computer, I have held off on posting a review of it until now. I tried another of What-Cha’s Harendong Jin Xuans last month and found it enjoyable. Since I have been a fan of the very few Indonesian oolongs I have tried and was curious to see how a dark roasted version of the previous tea held up, I dug out the sample of this tea and spent a good chunk of a day contemplating it. Of the two, this one was the clear winner in my eyes, but then again, I am willing to bet that I am more of a fan of the more heavily roasted Jin Xuans than many other people on Steepster.

Prior to the rinse, I detected aromas of honey, raisin, and plum coming from the dry tea leaves. There was something of a woody quality on the nose as well. The rinse brought out a stronger wood scent as well as new aromas of char, peach, and orchid. The first proper infusion then brought out a baked bread aroma. In the mouth, the liquor offered smooth notes of raisin, plum, and peach underscored by indistinct berry tones on the entry. These notes soon gave way to hints of orchid, char, wood, cream, and honey. Subsequent infusions brought out the orchid on the nose and I began to pick up somewhat stronger notes of char, wood, honey, and cream in the mouth. New impressions of vanilla, minerals, dried blueberry, and black raspberry emerged alongside hints of grass, cooked greens, toasted grain, brown toast, and coffee. The later infusions offered lingering notes of minerals, cream, wood, and char balanced by fleeting hints of vanilla and coffee with occasional traces of honey and fruit sweetness after the swallow.

As dark roasted Jin Xuans go, this was very nice. It displayed admirable longevity over the course of a gongfu session as well as very respectable depth and complexity both on the nose and in the mouth. The body and texture of the tea liquor were both very satisfying, as the liquor displayed an appealing smoothness while still feeling substantial in the mouth. If you are at all interested in more heavily roasted oolongs, I am willing to bet that you will find a lot to love in this tea. Even if your preferences when it comes to oolongs run more toward the greener side of things, I will assert that this tea would still be worth a try for you.

I am in awe of your ability to identify flavours

^ Me too. eastkyguy, how did you come to this level of tea expertise?

I’m not much of an expert I’m afraid. I’m more of a fairly consistent aroma and flavor evaluator that happens to have tried a lot of different stuff. A combination of experiences led me to this point. First, my parents and I have always shared a property with my maternal grandparents who took up farming prior to their retirement. They grew a variety of fruits, vegetables, and nuts every year and I always helped out in the orchard and gardens. My parents also raised a garden every year, and to them, landscaping and horticulture were and still are hobbies, so I became acquainted with a wide variety of flowering plants through working with them. Of course, I also later ended up working as a day training instructor in a greenhouse at a vocational rehabilitation center after my teaching career turned out to be dead on arrival, so I became familiar with more exotic plants through that job. In addition to all of the above, I worked in Asian restaurants, had friends and acquaintances who were chefs, and had the good fortune of going to college in a city with booming food, bar/pub, and brewing scenes. I had friends and roommates who took part in all of those scenes, and that, coupled with a sensitive nose and natural inquisitiveness on my part got me to me where I am now. A lot of it is just repetition, studying what critics describe, and trying to relate what my nose and mouth are processing to things I have tried in the past.

Practice Practice Practice is what I got from that. Alas, I have supertaster taste buds but I am terrible at identifying things that I’m tasting. Still, you should know that your tasting notes are a joy to read.

He also knows how to write. :)

Yes, your writing is beautiful too.

Thank you for unpacking that, eastkyguy. I’ll go drink more tea now, and then more after that. :)

And I will attempt to pay far more attention to detail.

Thanks for the kind words everyone.

I just read your review after posting my own and am amazed at the similarities in experience. I have noticed how detailed the notes are in your other reviews. Tasting and noting this oolong close to your level of detail took all my energy. You’ve got a hell of a skill, guy.

Thank you, derk. I’m glad you have enjoyed the reviews and have gotten something out of them.

On first steep, I didn’t love this tea. The roasted flavor was definitely present, but not overpowering, which I liked. But it also had a kind of tartness, or sharpness? I don’t know how to describe it exactly, but there’s a particular flavor I’m not too fond of that I sometimes come across in green teas, and it was present in this one.

But I was up really late last night, and ended up doing many steeps. Starting on the second steep, the sharp flavor mellowed, and the tea took on a fresh sweetness that I enjoyed. Each subsuquent steep, the sweetness seemed to intensify. So, I ended up liking the tea. I don’t think I love it enough to buy more when the sample runs out, but maybe it will grow on me.