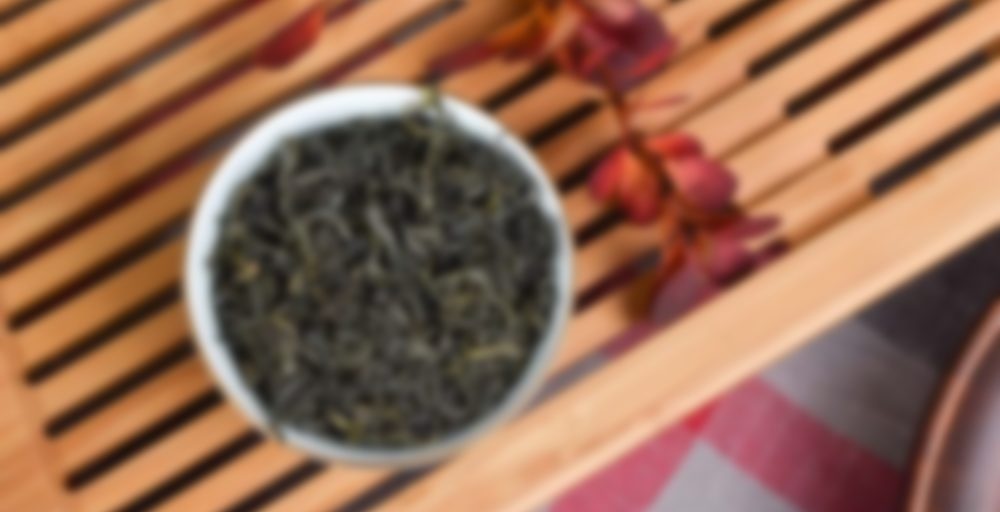 This harvest is picked in the cool autumn air after resting the plant through summer. The result is crisp, fresh flavor with more savory green bean and cream that Laoshan for which Laoshan is famous. The He Family’s plants are recovering from the bitter cold of early 2016, and this years harvests are sweeter for it. The He family’s signature green tea is fed by mountain spring water, picked by hand, and cultivated sustainably using traditional chemical-free farming techniques.

I decided on this one to fulfill the final October sipdown prompt – a vegetal tea. Just in time!
But in choosing it, I remembered my matcha and got a hankering for that, too, so I will probably have both, but this one is a sipdown!

Because I had an awkward amount of leaf, I slightly overleafed and found it initially a little more astringent than I wanted. A tiny bit more water fixed that, and then pairing it with my lunch made it really good. A bit of briskness makes some teas stand out enough to be noticed with food, whereas a milder tea might quail at combination and almost disappear, not much more than a cup of hot water,.

Today my cool weather crop plants are finally big enough to harvest enough greens for a vegetarian Chinese dumpling soup and it was perfect with the tea. The dumplings have toasted brown rice (among other things) in them which tastes really nutty and that seemed to amplify the nutty aspect of the tea. Or was the tea amplifying the nuttiness of the dumplings?

Post-prandial cup number two is just as strong as cup one, if not stronger. Green beans, not cooked Southern style in a pot of water with side meat but made in a skillet with sesame seeds and Asian sauces and allowed to get dark, crisp areas combined with a lemony tartness and a nutty follow up.

hehe I am glad I’m not the only one who does that. Something in a tea will remind me of matcha and I’ll want matcha too !!

This was extremely enjoyable. Other than that, as I sipped it down a long while ago, I can’t recall.

And it’s a sipdown!

Back into my 5g sample box. Brewed this 2 different ways today, grandpa for me and
twice western for the partner in crime while I stole some sips for tasting notes. This tea doesn’t hold up to grandpa style as well as western. Grandpa numbed my tastebuds for some reason. Western had a clearer aroma and taste and greater longevity. The second round of western was more experimental in which I purposefully let it overbrew and used 190F in a few steeps since I was making a baozhong oolong for myself. Neither long steep times nor high temp killed the tea.

Noted below is the first round I brewed western style since that’s what I preferred.

Dry leaf is yellowish-brown-green and smells like cashew, white sesame and whipped cream… I think. (Will I ever be able to train my nose and palate to green teas?) First and second steeps smelled really good and savory. They had the pungency of a nut butter, like tahini mixed with some cashew. The taste was similar with the addition of a light sweetness, marigold and edamame (Verdant noted both, I’m not sure I would’ve picked up on those otherwise) and an aftertaste of sweet cream. The liquor was kind of thick and creamy. Easy to drink quickly. Third steep thinned in aroma and mouthfeel and tasted like freshly fallen autumn leaves and marigold.

I’d say this autumn harvest is worth a try. FWIW, the partner in crime is willing to sell somebody else’s belongings to acquire more.