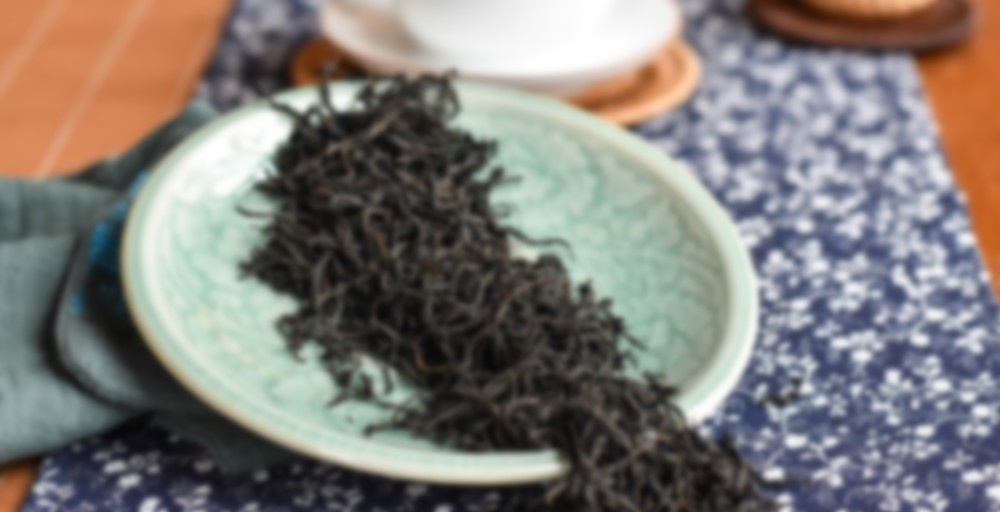 Feng Huang Black comes from transplanted Fenghuang Dancong from Guangdong established in the mountainous rocky slopes of Wuyi. As in Guangdong, these plants are cultivated as single bush trees instead of hedges. The result is a beautifully elegant expression of the bright, fruity, complex and sweet flavor of Fenghuang Dancong with the deep mineral notes of Wuyi. Black Tea Xiao Zhong style processing tempers the naturally tropical fruit of Dancong and pushes it towards blackberry. Because this tea is grown as single bushes and picked only once a year, the annual yield for the Li Family is very small. We are lucky to share this small batch from the Li Family’s tea gardens.

Here is yet another of the reviews I have been sitting on since May. I finished what I had of this tea sometime during the first half of the month. I was on a huge Wuyi black tea kick at the time and ended up drinking this and four black teas from Old Ways Tea over the course of like 4 or 5 days. Of the bunch, this was actually my least favorite, though all were quite appealing. To be honest, I kind of expected to like this one the least because I have yet to warm up to the idea of Dancong cultivars being used for black tea production. Since this tea was produced from a Dancong cultivar grown in Wuyishan, I sort of knew that there was at least a possibility that this tea would not do as much for me. In the end, I liked it somewhat more than expected, though I was right about it not quite being my thing.

Prior to the rinse, I detected aromas of lychee, apricot, honey, rose, and baked bread coming from the dry tea leaves. After the rinse, I picked up a stronger rose aroma and emerging scents of wood and hibiscus. The first infusion then saw the nose turn a little woodier and hints of cherry emerge. In the mouth, the tea liquor offered notes of baked bread, lychee, apricot, and honey that quickly gave way to rose and wood notes backed by hints of vanilla and malt. Subsequent infusions saw the nose turn smoother, fruitier, and more floral before gradually turning woody once again. Stronger notes of vanilla and malt appeared in the mouth along with belatedly emerging cherry and hibiscus notes. Candied orange, mineral, strawberry, cream, and peach notes emerged as well, and I also picked up hints of caramel in places. The final infusions offered lingering mineral, baked bread, and honey impressions that were balanced by subtle notes of rose, vanilla, lychee, and candied orange.

I know I am the outlier with regard to my rating of this tea, but I was more than a bit taken aback by this tea’s intense fruity sweetness. It seems that the black teas produced from Dancong cultivars always either strike me as being incredibly sweet or oddly herbal, and to be completely honest, they are always a bit much for me either way. Personally, I found this tea to be a bit too sweet in a number of places. It is obvious, however, that I am the only reviewer to this point that has had that particular complaint. While I enjoyed this tea’s complexity and did not find it to be bad by any means, it is doubtful that I would go out of my way to reacquire it. In the end, I can understand why other people might have liked this tea, but it was not really for me.

This is one that got lost in the shuffle of all of my new tea. Pulled it out from a pile this morning. When I opened the package, I got a very nice creamy berry type of smell. Not tart dried/dehydrated berry but very sweet and creamy.

When brewed, the dry leaves initially send up a classic, high quality, malted honey scent that I am familiar with in well done black tea. But, what is this? I stick my nose a little closer and there is that berry scent again. Hot damn! This is almost unlike any scent I’ve gotten from tea before. It is kind of like a mixed berry because I detect hints of blackberry, blueberry, strawberry but I can’t really nail it down to one specific kind as being the most dominant.

My first steep was admittedly light in that I let the tea brew for about 15 seconds. But, as we know, in gongfu style most of the first (and sometimes second) steeps are a bit lighter until the water really gets a chance to saturate the leaves. But the promise is there in a light malt and, again(!), fruit flavor.

The leaves on the second steep smell more of the same. The liquor looks a bit darker despite leaving the steep at 15 seconds, which is to be expected. But when I say darker, I mean it is a buttery blonde color at this point. Not dark in the traditional black tea sense. The berry flavor has intensified where now I can taste it on my lips even a few moments after taking a sip.

Honestly, this is one of those kind of teas that makes me fall in love with tea all over again. It makes drinking through all of those bad or mediocre ho-hum teas worthwhile. A true delight.

Still trying to get the hang of brewing black tea. I’m finding my usual lazy method of 1 tsp of tea for 3 minutes doesn’t work for every tea. I western steeped this tea my first couple of sessions and it was a total fail. The smell alone was enough to trigger my gag reflex. Some teas are designed for gongfu and this is one of them.

I eventually decided to follow Verdant’s method and steeped 3.6g of leaf in a 160ml pot using water just off the boil. First steep was for 15s and I added 10s to each subsequent steep. On the nose, there’s a faint aroma of vanilla and smoke. The wet leaf is smokey cacao nibs. Like most of Verdant’s blacks, this tea has a wonderful rich chocolate flavor that early on coats your entire mouth with its sweet lusciousness. I detected notes of bread and unusual fruity overtones that I could’t quite place. I would describe them as overripe fruit. Verdant’s tasting notes for this are all over the place…berries, rose, angel food cake, buttercream, turkish delight, etc.. Mayyybe. I find their tasting profile can be a stretch sometimes. The only one of their descriptors I could pick out was a hint of buttercream frosting in the finish.

This was an interesting black tea. It started with an intense chocolate explosion and went on to develop a distinct, complex flavor that evolved with each steeping. That said, some of the flavors in this tea weren’t quite up my alley. Glad I got to try it, but I still prefer the Classic Laoshan black tea.

I find this tea to be a really exceptional black. Most black tea taste pretty much the same to me, lots of honey and some savory notes, this one is really different.
On the nose I get berries, yes some honey too, vanilla, and some really nice herbal notes that I just can’t quite name. Palate there is definite strawberry, honey, creme brule, lemon, cassis, and a ncie mineral note, almost like a wulong.

My black tea yixing is starting to smell like black tea inside when its dry :)))) I’m so proud of my little Sandy.

The leaves of this are smaller than one might expect for a phoenix varietal, on the website it says the varietal is “feng huang dancong” so uh yeah well anyways

Brewing at 95C, with my ~150ml yixing about half full of wet leaf

the dry leaf aroma is like a chocolate chip muffin

In the warm pot it smells so good, it’s sort of like raspberry cake or a trifle or something, mmm

1: Smooth orange flavour, cream flavours and feels, sugars, berries, there’s definitely a creamy cakey kind of thing too, some hints of earth and wood and sort of like munching on some leaves.

past the 4th the tea becomes a more floral black tea with mango, strawberry, some astringency and a tingly mouthfeel, leading to just flower taste

This actually tastes how verdant described it, how often does that happen?
This is an amazing black tea, a must try for sure.