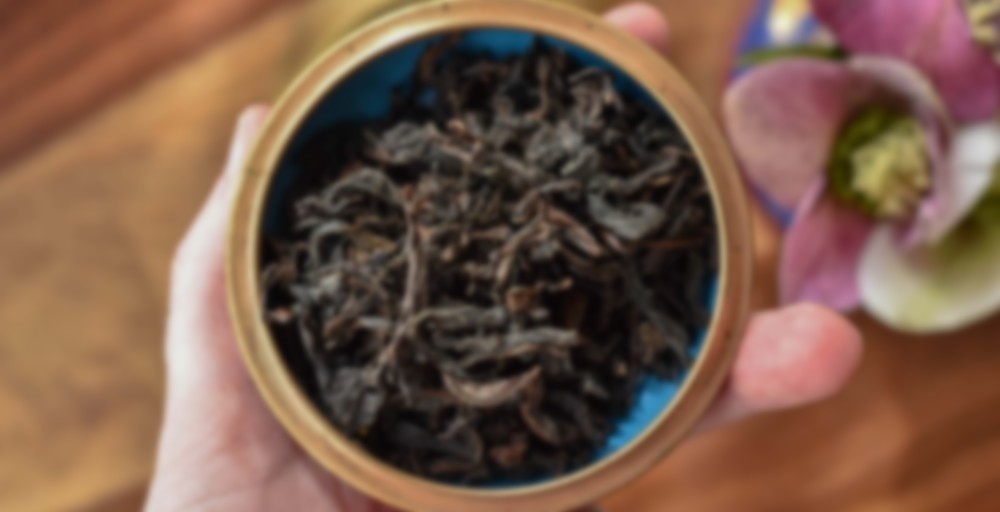 This is a brand new kind of tea. The Liu family is just beginning to experiment with Big Red Robe style processing using large leaves from their more mature bushes. Mrs. Liu joked that making Big Red Robe is simple compared to green Tieguanyin, as it is more forgiving, and faster to finish. The resulting tea is an incredibly interesting taste experience, combining the bright fruity overtones of Tieguanyin with the roast and lingering aftertaste of Big Red Robe. Teas like this are an inspiration, a reminder that tea is not static, not stuck to tradition, but a growing and thriving industry.

This tea is a medium oolong with a rich amber color and a woodsy baked aroma. It is sweet tasting with notes of cedar, berries, and roasted brown sugar. As the tea cools, it becomes a little more fruity, which I am not big on. It is a good tea, but not really one for me.

So I was a bit busy this morning and didn’t set any kind of timer or stopwatch… so I steeped this approximately a min give or take a few seconds. It didn’t seem to suffer though as far as I can tell. I was a bit impatient to drink my tea so I burned my tongue again… (happens when I’m too eager to get my tea fix). So I can’t pin down exactly what I’m tasting but it tastes yummy! I swear I’ll do a better job tomorrow on my day off. It was from a Verdant Tea tea of the month sample ages ago. I will clear up my tea stash :D

I finally managed to get a new 4 ounce gaiwan and I have been working on getting a feel for it. One thing I liked about the one I unintentionally broke was that it fit in my hand extremely well and was super easy to pour. This one is prettier, but it is also a bit squatter, which means that it does not fit in my hand as comfortably. It takes a little more effort than I’m used to, but I’m making progress. This Anxi approximation of a Da Hong Pao was the first tea I brewed in it. I found it to be a solid tea that reasonably approximated the character of a traditional Da Hong Pao.

Prior to the rinse, the dry tea leaves produced mild aromas of wood, char, and roasted nuts. I also thought I picked up some smoke and possible hints of flowers and caramel. The rinse released intriguing aromas of butter, cream, pipesmoke, nutmeg, and saffron. The first infusion brought out hints of grass and vanilla. In the mouth, I picked up on gentle notes of caramel, cream, butter, wood, char, and roasted nuts underscored by smoke, nutmeg, and saffron. Subsequent infusions better brought out the smoke, nutmeg, and saffron while the vanilla and grass also began to express themselves on the palate. The vague roasted nut notes began to take shape, increasingly reminding me of roasted almonds, chestnuts, and cashews. New aromas and flavors of osmanthus, lilac, rock sugar, minerals, and apricot also appeared. The later infusions continued to emphasize butter, grass, cream, vanilla, and wood notes balanced by grass, char, and a gentle minerality, though the popcorn note I tend to get from the later stages of Da Hong Pao sessions popped out at this time too.

As mentioned earlier, this tea did a reasonably good job of approximating the character of a traditional Wuyi Da Hong Pao. I would assert, however, that the lack of a sharp mineral presence and the distinct floral impressions were dead giveaways that this was not the real deal. Still, this was a worthy experiment. It was very much worth trying, although I think the next time I’m in the mood for yancha, I’ll stick with actual yancha.

February tea of the month club has sent me this tea, and for my second tasting of the day we have the big red robe tienguanyin. I started by doing a quick rinse to open up the tea leaves. I decided to sip the wash to see what I was in for, and even at this stage it was interesting, smokey, caramel, and a slight bit of astringency.

I brewed this in my yixing pot and steeped it for a bit over 30 seconds, to let it get a good proper infusion. I got a clear medium brown liquor, very similiar to what you would see with a big red robe tea. A smokey sweet aroma was the first thing I noticed when lifting and taking in a bit of aroma on the lid. The taste was just absolutely stunning, sweet, smokey, astringent and just this powerful sensation of caramel. I was incredibly impressed by this tea.

The second infusion was just slightly stronger but not overly so, and also produced a clear medium brown liquor and in none of these steepings, even the wash was there much dust coming out of it. There was also no bitterness just that light mouth watering astringency on the back of the tongue along with a slight sensation of coolness which Ive only ever gotten on really good big red robe tea.

In conclusion this reminds me more of big red robe than tieguanyin though I havent had a lot of experience with either, but I do know that I like it, now you will have to excuse me while I go steep another helping.

Ps Im getting more of the fruity flavors mentioned in the description in later steepings, but my inexperience with both TGY and BRR is showing, and I cant quite place it.

Not sure, but I have 2 more samples of it, Ill try to place it next time. I finished up that brewing session.

Backlogged; I believe I enjoyed this. I did actually taste all the teas from the box around the same time, and definitely liked a couple more than the others, but failed to write that information down and now haven’t a clue which was better. Ha.

Dang… this is some good tea. I thought there would be an odd transition of roast/rock oolong to buttery green oolong. It didn’t work that way, which is fine. I ended up getting a rather smooth steep after steep of a roast/wood taste with small texture and nut notes. This is lighter than a normal Big Red Robe and a bit smoother. While this was nice, I think with the TGY title I would want a buttery texture that is more noticeable or the TGY floral notes behind the BRR. This has a lot of potential if they execute it to have the notes of TGY and not just a slightly lighter taste with a higher smoothness to the tea overall.

Our tea-of-the-month arrived yesterday and lo! A great variety of new teas from Verdant’s partner, the Liu Family. Very excited to go through them all here. I drink, and have drunk, a lot of Da Hong Pao. It is a flavor profile I know well. Heck, I have a purion pot just for big red robe oolongs. So a unique new twist on this personal favorite should be fun.

The leaf looks and smells for all the world like Da Hong Pao. Long, lightly twisted deep brown with rusty highlights and that cocao & cedar wood aroma. The wet leaf is malty.

It is in the cup where it kind of ceases to be big red robe. This cup is soft and warm and lacks the mineral sharpness of Da Hong Pao. All the obvious notes are here, but there’s a backbone that big red robe presents strongly which isn’t here — which isn’t to say that’s a bad thing, it’s just obvious what this tea is and what it isn’t.

There is a very subtle drying astringency at the long finish which is pleasant. There is some, but not much, hui gan at the back of the throat.