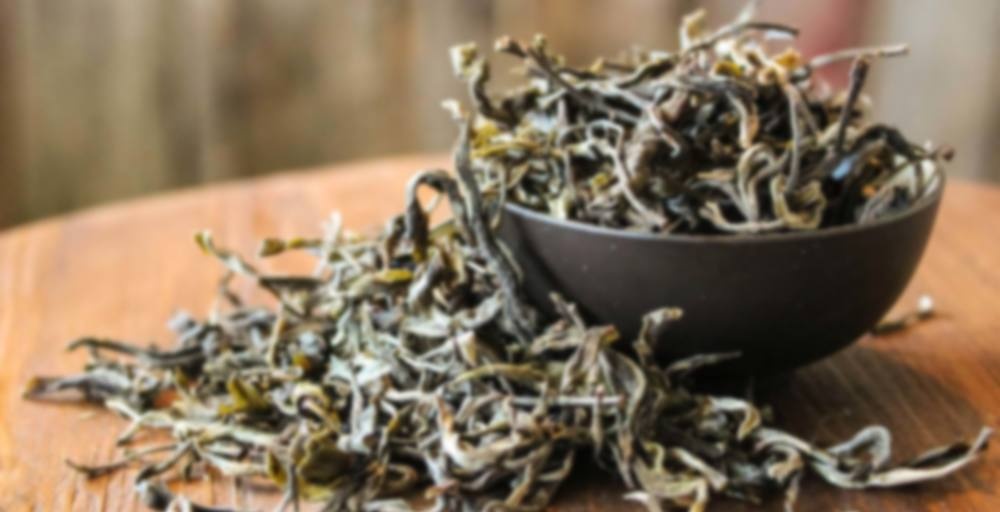 Every batch of tea from Master Han is unique. This is because, instead of trying to reproduce results through identical processing, Master Han tastes, smells and carefully evaluates each harvest he picks to determine what will bring out the most in the natural leaf.

Though he often chooses to process his wild-picked tea leaves as black tea and sheng pu’er, this Spring, we’re extremely excited to share new spring green tea from Master Han. Simply processed in the traditional rustic style, the bright, fresh harvest is finished to bring out the best in Qianjiazhai’s unique terroir.

Master Han explained to us that by allowing the tea to slowly sun dry instead of taking short cuts with machines, he can get more of the aroma and flavor of Qianjiazhai in each leaf. As the tea absorbs the gentle Yunnan sun, it takes in the aroma of the wild trees and herbs growing all around Master Han’s high mountain workshop on Mt. Ailao.

Every sip is nuanced and full of tulsi, sandalwood, fir trees, and roasted walnuts. The aroma of the huge leaves is rich and untamed, making us nostalgic for our time in Master Han’s wild tea forests. While similar in flavor to Master Han’s fresh maocha, this green tea’s herbaceous edge is tempered by a smooth, buttery, almost semolina-like quality that makes it a well-balanced and fully realized green tea to stand in contrast to the crisper and older notes in the sheng pu’er that is picked from the same 100-300 year old trees.

Dry leaf is long and brittle and smells of asparagus, white chocolate and smoke.
first steep was all wet grass, seaweed and smoke
later steepings revealed more apricot, saddle leather along with vegetal tones, but I thought it lacked in the mid-palate so I pushed it a little more with steep time. This was a good idea as it picked up some body and brought out some warm spices such as cinnamon and sandalwood, supported by apricot and fine astringency. Smokiness still lingers.
a very delicate sweet finish.
reminds of a young pu’er, but lacks a certain je ne sais quoi

An interesting tea that changed a bit with each steep of the leaves. Sunny, warm flavor of cut sweet grass with some nutty tones. A really pleasant green tea to warm a cool fall day. Lovely amber color, and good for at least three resteeps before the flavor fades.

Welcome back. Haven’t seen any notes from you in a while.

Thanks Doug. Funny how I got away from leaving tasting notes, and don’ t really know why!

I was surprised to see you mention a cool fall day. Weren’t you living in Florida?

After living most of my life in Miami, FL I moved to Raleigh, NC 18 months ago. Among other factors, it is nice to be where lots of folks like tea, and where we have 4 seasons instead of Miami’s eternal summer heat and humidity!

I totally get it. I’ve always lived in the Northeast but went to grad school at UF and my family had a house in the Keys for many years. I couldn’t handle the heat and humidity year round.

when i smell the leaves dry, they have a spicy smells to them.

when i smell the leaves wet, it has a strong asparagus smell to it.

when i smell the brewed tea, i smell honey.

when i taste the brewed tea, i taste a slight asparagus taste, a slight sheng puerh like honey taste and strong spices.

the color of the brewed tea is a bright amber.

i was confused… i did not know if this was a sheng puerh or a green tea. it has some puerh taste, however it has the green tea taste too.. so confusing….

i rate this tea a 75 because it was good but not the best.

many thanks to liquidproust for sending me this decent sample :)

I was really curious about this one, and since it was on sale, I decided to get an ounce. Starting off, the dry leaves are long and spindle like, scented very similar to a Yunnan White Moonlight but grassier. I added about a tablespoon of it, but not a full one because the leaves were so long.

I did pour 195 F hot water in for fifteen seconds, and drank it. It definitely taste like a green version of a Yunnan Moonlight. It has the weird, hay and creamy notes of one, but then it has a very grassy seaweed taste. I did the second steep for about 30 seconds and it was the same as the first.

I am glad that I tried it, but it’s not my favorite. I think that this is an amazing quality tea with a very unique, almost Pu-Erh type taste, though not one that I would drink often. I personally did not enjoy this one as much as I thought I would.

…now for the back note. I had to try it again. I used considerably less leaves this time, at around four grams with water at 180. First infusion after 30 seconds it was still the sea weed fishy grass I didn’t like. But I steeped it again at 50 seconds by accident, and it tasted like a green tea with a recognizable apricot note. It was way better. Third time at around three minutes, it kinda resembled a Sencha with more sea mist than weed, yet not quite as grassy or sweet. It still resembles a Yunnan Moonlight and really isn’t close to a Sencha, but again, there’s that maritime quality to it. The rating remains as a personal seventy for me, but I liked it more in the later infusions.

It wasn’t there with the first sip, but now I taste it distinctly: smoke. With the next sip, it’s gone and again I taste a mellow green tea. Next, I taste a slight seaweed flavor. Each sip tastes different than the last, just like each dry leaf looks different than the one beside it. This is a mysterious and capricious tea.

I have to confess that lighter tasting green teas aren’t usually my preference, but this one was at least an adventure.