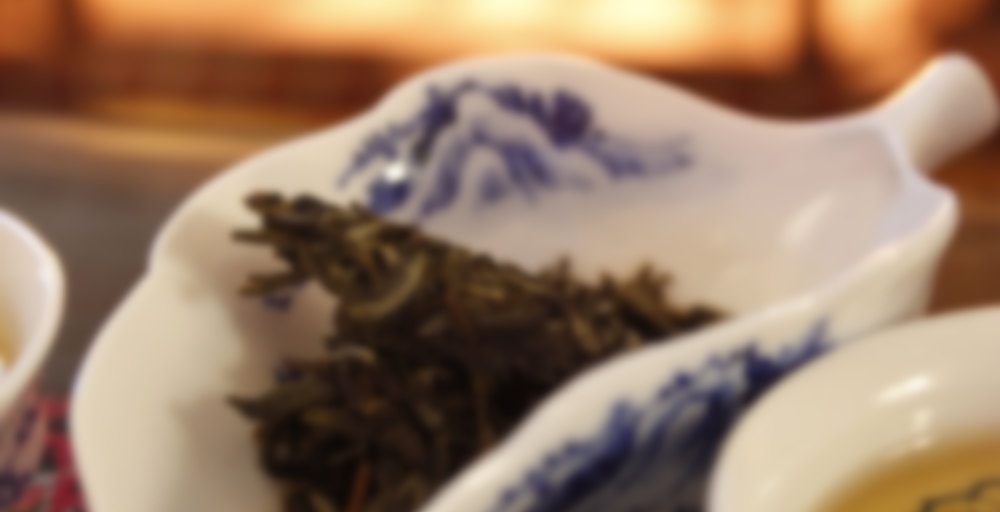 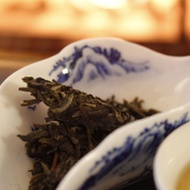 This impressive sheng is a special old-growth tea tree picking with beautiful buds and leaves. The aroma is sweet like vanilla ice cream, savory like yams, and pungent with a note of musk.

The first steepings are crisp and sweet with pear notes and a lingering peppercorn flavor. The aftertaste is impressively strong and drawn out for such a young tea. Slowly, the savory notes start to emerge, first a grain-like toasted wheat flavor, and then something closer to mashed potatoes with sweet cream and butter.

This tea has a long steeping life, and not even the slightest hint of dryness. The intense, sweet-spicy aftertaste tells us that this has great potential for further development, so we bought all 35 remaining cakes that Lao Tong Zhi’s rep in Qingdao had to sell us. She said that the stock went extremely fast as tea shops were eager to buy up the stock for aging and later re-release.

What Was Picked: Large leaves and buds from old growth tea trees

Reusing the leaves from before I decided to try this western style. I find this helps cut the bitterness. I found it to be much more pleasant, but also less complex this time around. It was still complex, but not as much as it had been before. This time I had notes of light sweet tobacco, dirt and earth, a little bit of smoke, a hint of peppercorn, and a hint of bitterness in the aftertaste. The bitterness is cut down a lot. I still never did find the jerky I had smelled in this tea earlier though. I want to like this tea and I do like this tea, but that bitterness I just can’t stand. I think (hope) that if this ages then the bitterness will go away. But I only have a sample of this and I don’t think I will let it last long enough to age!

I’m leaving the rating off for now since I’m not sure how I want to rate it yet.

The only alarm clock needed this morning was the bright sun! Those of us fortunate enough to live in higher altitude’s know about sun glare and the need to wear sun glasses year around. It’s really bright out today!
My condo looked like an alien spaceship was outside shining lights under the doors and windows trying to get a beam on me in my pajama’s. No deal! No alien was going to separate me from my tea cupboard!

A nice warm sunny day usually comes right before snow, someone pointed out yesterday. (Heck, we’ve had nothing but nice sunny days
for the past year!)
It’s December! The forecast looks promising for this weekend…we hope! I that December magic with a couple of inches of snow!
I have my camera ready!

The Tea:
This morning, I wanted to practice my Gaiwan skills with the new Verdant Sheng I purchased during the Black Friday sale.

I’ve been watching the new Verdant video and practicing how to pour and strain tea, shaking off all the water from the leaves so that there is none left. (Which causes bitterness in the next steeping)

I have a small 4oz. FAT (easy to handle) white Gaiwan, and I used a small amount of hard sheng (about 1.5 tsp). Boiling water.
(It is important that the water is filtered or you may have bitter tea.) A strainer is very useful. Always rinse the leaves once first.

My infusions were as quick as I could manage (5 seconds).
The liquor was a light yellow green, and the leaves smelled like sweet salty tobacco then changed and had a sweet herb scent.

The small amount of hard Sheng I used almost filled my Gaiwan half way with big green leaves when it expanded fully.

My first tasting was smoky, salty but not harsh. The scent was light tobacco, but the leaves were still tight and hard, waiting to expand. Not much to comment on as yet.

The second tasting was softer than I imagined it would be…sweet and savory on the finish with a smoky tinge and vegital something that reminded me of the feeling when drinking a Gyokuro.

For the third and forth infusions, the light smoke and saltiness settled down and an herb flavor, Greek Oregano came to mind… with a peppery bite. The tea never became dry or harsh but stayed smooth and very easy to drink.

As I went through each steeping (now on the fifth) I realized just how smooth this Sheng was. Something that I don’t always experience with a young Sheng.
The flavors were rolling around in my head for a long time because there was a definite umami quality about it!
There, I’ve said it!
Usually this is only a term used for Green Tea, but I experienced umami as this tea hit all the sweet, salty, savory, slightly bitter taste points.

This reminded me of roasting root vegetables like potato, red onions, sweet potato, parsnips with olive oil and butter, Greek oregano and sea salt. The vegetables retain the savory quality but roasting brings out the sweetness and smokiness too.

One thing that I don’t understand much about is aging Pu’er. That’s something I have to study up on. Right now though, this is a tasty
Sheng. You just have to be careful not to oversteep or you’ll have a bitter cup.

YAY! I knew I wasn’t crazy lol. I agree, ‘umami’ is a usually a green tea characteristic but I have found some Puerh that wear it. I like it, it is soothing in my opinion.

YAY! That mean’s that I’m not crazy too, or we’re BOTH crazy!

LOL! SHHHHH! They are not supposed to know that. But honestly, I really like it, no matter how unexpected it was for me. It was very welcomed. In my experience, the ones with this trait have a longer than regular aftertaste, and as time passes it starts to become sweeter like you would have expected the aftertaste to be.

After reading your review, I wonder if I get bitterness a lot because I overleaf? When I did mine (I don’t have a scale) it ended up filling my entire cup when it was fully expanded. And just so you too know, I read nothing :)

I’ve begun using a very minimal amount of leaf with puerh and enjoy it a lot more. There’s even touchas that I cut in half to maximize flavor for me.

Invader- I don’t read notes before either as a rule. I do read brewing instructions on regular tea’s though but not information on taste. I like to make up my own mind and see how it compares. I’m more at ease with how much Shu Pu’er to use and how long to let it steep. I like mine a bit on the stronger side so no cutting Shu Tuo cha’s in half for me Whispering Pines. You can’t do the stronger brewing with a Sheng or the hairs on your head will raise up like Alfalfa from the Little Rascals. (I lost some of you with that reference!) That’s where cutting back a little works better for me too.

Lol, Bonnie, when I said I read nothing, I meant of how you two are crazy! But I don’t read reviews before trying teas either. I like mine a little less strong, but I think I will start using less leaf, especially for shengs. And my hair is short enough that it does look like Alfalfa in the morning! No reference lost on me!

Nice review, as always, Ms. Bonnie. I haven’t tried this one yet, I was gonna drink it today, but I realized I was more in the mood for a Shu. Even though I’m still fairly new to Puer, it feels good to know which type I was in the mood for!

I’m finding that with Shu’s I usually go with 5grams of tea in my 4 oz Gaiwan, whereas with Shengs I want much less. Still not sure how much yet. 5 grams was WAY too much, even with the shortest possible steeping, 4 grams still seemed too strong, so I’m gonna try 3 next time.

Good idea. This one I think less is more. My own opinion though.

Teachat has some good threads about aging puerh if you’re interested.

I guess I missed the ‘slamming’, must have happened when I was off playing gigs somewhere.
I find that with tea, as with all other things in my life, beauty is in the eyes of the beholder (or in this case the taste buds, etc). A tea that I love might be a total turnoff to another sipper. The price I am willing to pay, the place I put my trust (as in tea purveyors), those are things that are subject to my own experience, & no one else’s. We all share our experiences & preferences here, in what I consider a loving & open hearted community, but only I can determine what my tastes are, if it’s worth the cost, how it makes me feel, etc. I Love Verdant, more than anything because of the commitment to the authentic & unique artisan ideal, but also because the teas are awesome. I love the educational element as well.
So the bottom line, for anyone, is “Do I like this? Is it worth the price for ME?” If not, don’t buy it. No need to trash a person, or a company, just give your opinion in an open hearted way, and try something else.

I’ll be the first to admit that I really don’t know much about puer teas, other than the difference between Sheng & Shu. I’m still learning, & I’m learning by drinking, by reading things online, by reading reviews on steepster, but mostly by drinking a variety of teas.

Crazily, I already have an assortment of both Sheng & Shu teas! I have all the shengs in a big cardboard box together, & all the shu in another box. Both boxes are on the 2nd floor in my office, away from the kitchen. I don’t drink them every day, but I’m trying to drink them at least a few days a week, & gradually rotating through my collection (& adding to it), so that I can really develop a sense for what a good sheng or shu is, & also finding out what I like about them.

This is a young Sheng, but I already like it! It reminds me of a few things:
potato chips
triscuits
lemon
It has a very lively flavor. It’s mouth watering, a little tangy, & definitely gets the Chaqi flowing!
My formula: 4G + 4oz water (rinse) X 5 sec for the first 5 steepings, then 10 sec for the next 5 steepings.

Brought nearly all my pu’erhs along for my mom to try, and we brewed this one up today! There were no brewing instructions, so I went with a couple chunks and a 20-second rinse in near-boiling water, and then a 2-minute infusion. The result was pretty good in my opinion, a little smoky, spicy, and tasty. My mom labelled it “grassy” and didn’t like it as much as the 2003 Banzhang Farmer’s Cooperative Sheng I left here with her in July. I’ll be fine with taking it home though, as it was tasty enough for me! Still not a big pu’erh fan though…