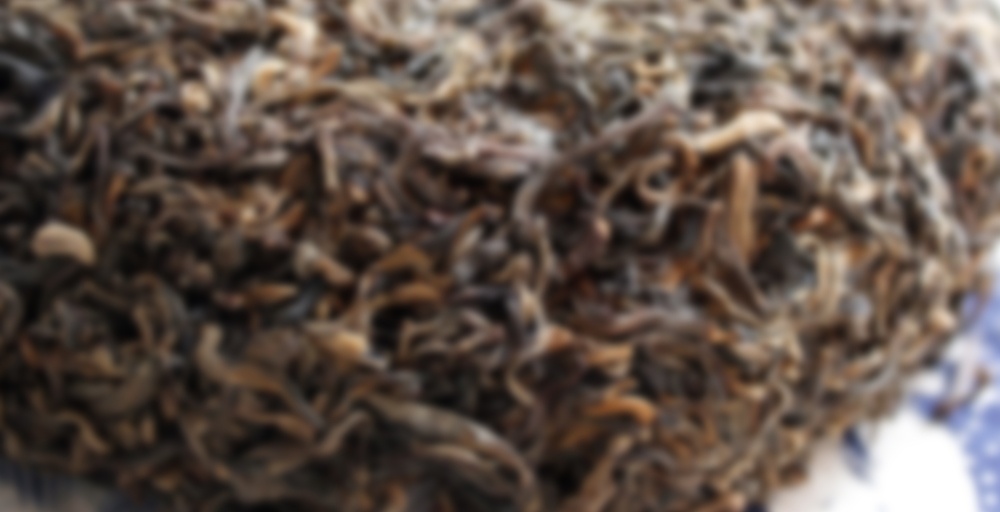 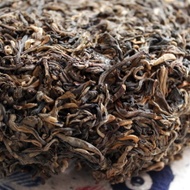 by Verdant Tea (Special)
81
You

Master Han picks wild tea trees in the Qianjiazhai region of the Mount Ailao National Forest Preserve, Yunnan. He takes the utmost care to “let the leaves speak,” pressing each batch of leaves differently to bring out their best, either as a looseleaf sheng, a black tea, or a pressed cake or ball of tea. This special reserve ten year aged sheng was picked in 2003 by Master Han personally and aged in Yunnan until this month.

The aroma of the wet leaf is the sweet nostalgic smell of blankets in a cedar closet. Brewed, this tea is unusually sweet, clean and citrusy for a sheng of its age. Instead of a musty flavor, there is a light sparkle and woody aftertaste that makes the tongue tingle. The texture is almost crisp like a pear, but creamy like a golden needle black tea. There is a lingering “wild” complexity of mushroom, pine, and light florals imparted by the forest itself found in all Master Han’s tea.

This is such a pleasantly clean & clear sheng, tasting lightly of cedar & feeling like a light vanilla creamy texture. Through the sippings it became more savory, with a green olive oil pepperiness, & then later there was a sweet citrus type taste & texture. There is a very lively energy to this tea. I feel very present, laid back, & calm, & I’m thinking “bubble bath”.

I’m trying to drink at least one of my TOMC/TOMCR teas each day, to work my way through them. This was from February TOMCR, & it’s a really nice one. Sadly, this is a sipdown.

i keep saving this one…

Another tea that i’ve been drinking all morning from the reserve club. This is one of the few puerhs from verdant that i really enjoy, as in the past i’ve much preferred Mandala’s offering. I am a fan… love it!

I’ve tried to be open about my tea journey. I am still a beginner, and one tea that has intimidated me is Sheng Pu’er.

I look at a package of Sheng and feel like I’ve been called into the Principals office! (Some people feel this way about ALL Pu’er!)

Because I’m such a chicken, I took a sample of this to share with Joe on Tuesday because nobody would be at the tea shop in the morning. He loves Sheng! (And he would do all the serving)

Steep one tasted thick and salty like whipped butter. I felt a cooling sensation in my mouth but Joe didn’t. (We hurried on)

The second steep was “black-teaish’ (not proper English but I’m quoting) and sweet vanilla-nut. We felt nut oil instead of butter that was a blend of brazil nut and cashew, adding sweetness and some creamy body.

Joe over-steeped the third round at 20 seconds…yuck! This one smelled very sweet like paste, and was super astringent…blech!

Steeps 4-5 were Savory…like dark meat chicken and potato skin. The sweetness and fattiness were gone.
(This was still tasty tea, but the 3rd long pour stripped some of the flavor out.)

We stopped at this point, one of my better experiences with Sheng Puer!

So many prior Shengs have been young, smoky (and somewhat harsh!).
Master Han’s Sheng had body with complex flavor, creamy texture and black-tea quality. I liked it!

The only way to get over being afraid of tea, is to drink it.

Totally agree. Drink that tea and to heck with the fear! :)

i really liked this one :)

That last statement is too true!
On another note, this sounds really good.

I love sheng pu erhs and have quite a collection….glad you’re finding the ‘legs’ for them…..

I think the first Sheng I tasted was young, brash, & I used too much leaf. I was like, “People drink this???”. But the experiment has continued, & I have learned to use less leaf, keep to short steeps, at least at first, especially with the younger ones. I really enjoy the clarity that I get from drinking Sheng, especially in the early evening. It doesn’t seem to keep me awake, but it is conducive to my evening mood.
Anyway, I enjoyed this one!

Sorry to hear the 3rd robbed the potential of later brews. Keep trying!

Oh I keep trying. It’s not that I haven’t had good sheng, it’s just more challenging.

Oh, I meant keep going at the same tea but I agree with your sentiments!

Nope. Shengs still not for me. I have to say, I do get a bit of crisp, fruity pear from this, although perhaps unripe pear there is no sweetness. Like perhaps an extremely dry white wine, except I like dry white wines. :P Slightly bitter and astringent, but the sharpness is followed by a remarkable smoothness. A tea of extremes, I guess. It’s like the woods in the spring, but not pine woods like many shengs I’ve had. Deciduous woods with the first buds coming out. An interesting tea.

Your description of this sounds so appealing to me :D I enjoy sheng though hehe